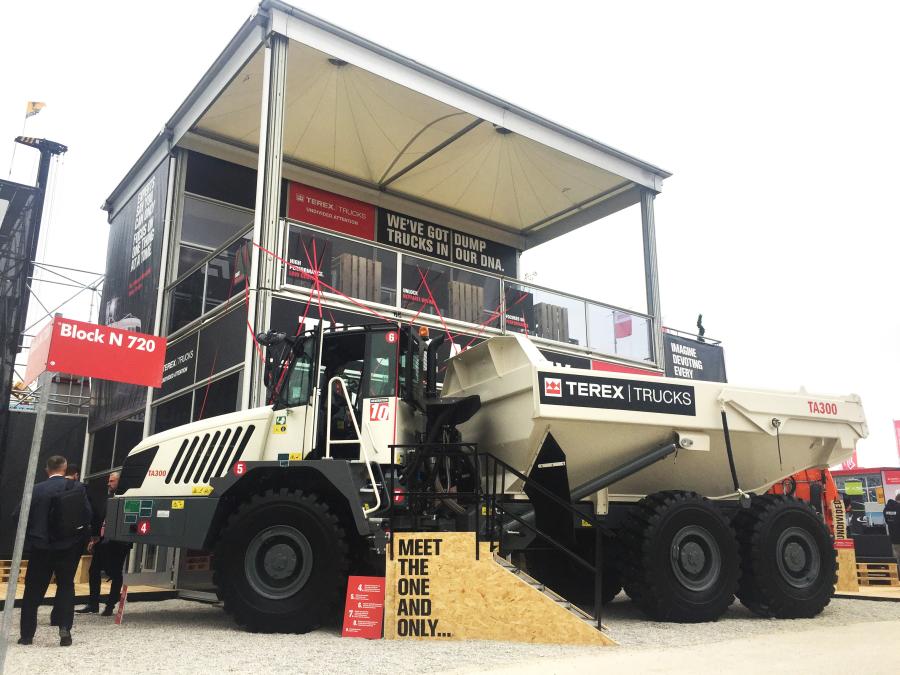 The recently updated Terex Trucks TA300 articulated hauler is making its first international trade show appearance on the company's outdoor stand: FN 720/9 at bauma in Germany. Representatives from Terex Trucks are at the event, which runs from April 8 to 14, showing visitors how the company's two articulated haulers – the TA300 and TA400 – deliver low total cost of ownership and high productivity on jobs including large-scale construction projects, infrastructure developments, quarries and mines.

All About Articulated Haulers

"Bauma is the biggest trade fair for our industry," said Paul Douglas, managing director of Terex Trucks. "It attracts all kinds of equipment from around the world, but for us, it's all about robust articulated haulers – that's the only product Terex Trucks manufactures. This gives us the luxury of being able to focus all our attention on this machine. We are the experts in all-things articulated hauler, and have been for many decades."

Since August, the TA300 has incorporated the new EP320 transmission, which comes with two additional forward gears – eight in total – as well as four reverse gears. This helps to ensure smoother gear shifting and thereby superior operator comfort. In addition to this, the TA300 now delivers a 5 percent improvement in fuel efficiency, as well as enhanced performance, productivity and operator comfort. It also now comes with long life transmission fluid, which has helped to increase the length of time between oil maintenance intervals from 1,000 to 4,000 hours. The hauler's maximum speed has also increased to 55 km/h (34 mph), up from 50 km/h (31 mph). Ultimately, this means that customers can achieve faster cycle times, reduce the cost of operation per tonne and minimize their fuel consumption.

On April 11 at 4:00 p.m., Terex Trucks is hosting a press event on its stand for representatives of the international media. Douglas and his team will discuss product news, market conditions and future plans. "Terex Trucks is currently expanding its presence in key markets and that includes Germany as well as the US and France," said Douglas. "Over the last five years, we have increased our distribution network by 23 percent and we want to continue this growth. At the moment, 50 percent of our global dealers are based in EMEAR. We already have three well-established dealers in Germany but we're looking to sign more – particularly in the east and north-east of the country. Bauma will be a good opportunity for us to meet and attract new customers and dealers."