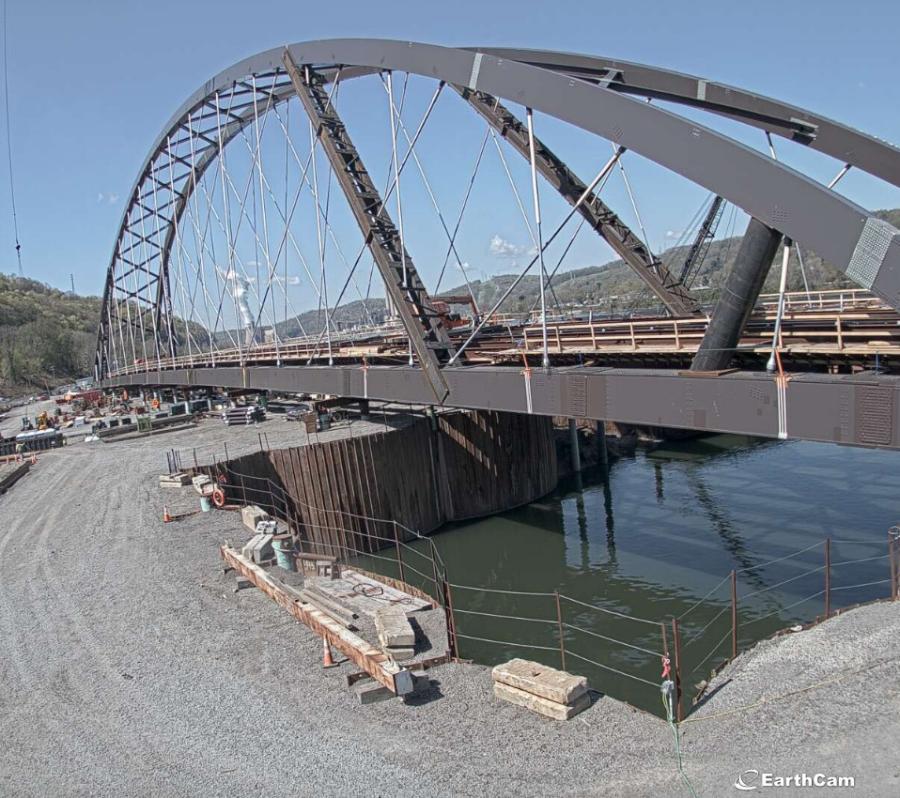 The Wellsburg Bridge will provide a key artery for communities in northern West Virginia and eastern Ohio when it opens in the fall of 2022. It will connect WV Route 2 in Wellsburg with Ohio Route 7 in the community of Brilliant.

The construction of the Wellsburg Bridge over the Ohio River will reach a major milestone when the 830-ft.-long tied-arch span section of the structure is floated to the crossing's new location and lifted onto the existing piers.

The West Virginia Department of Transportation (WVDOT), along with the project's contractor, Flatiron Construction, announced that, weather permitting, the 4,000-ton arched span will be barged one mile south from where it is currently moored in the town of Wellsburg, W.V., on the river's shoreline.

The Wellsburg Bridge will provide a key artery for communities in northern West Virginia and eastern Ohio when it opens in the fall of 2022. It will connect WV Route 2 in Wellsburg with Ohio Route 7 in the community of Brilliant.

Moving the tied-arch span, which was assembled adjacent to the mooring site, should take place early on April 23, followed the next day by the actual lifting and positioning of the main section onto the piers, reported The Intelligencer, a Wheeling, W.V., news source. The move was pushed back two days following a weather forecast for April 21 that called for rain and possible snow showers with wind gusts as high as 23 mph.

A Flatiron spokesperson noted that in the interest of safety, river and wind conditions must fall within certain parameters before the float can move ahead.

The work is part of a $131 million project undertaken by Flatiron, based in Broomfield, Colo.

After the bridge float begins at 8:30 a.m. on Friday, over the next four hours the tied-arch span will be carried on four barges downriver past the new piers before being turned 90 degrees and positioned into its final orientation at the lifting site. If all goes well, Flatiron's crews are expected to begin the slow lifting process before dawn on Saturday, a process that will last through the afternoon hours before the arch structure is moved and lowered into place on top of the bridge piers.

West Virginia Division of Highways (DOH) District 6 Engineer Tony Clark said hydraulic jacks upon each barge will be used to move the tied arch span because no cranes are heavy enough to support a structure of this size, according to The Intelligencer.

"So, they're jacking it up from below in increments," he told the news outlet. "It's going to take a few hours to jack it up. They're just going to move slow and it's going to take some time. At the end of the day, it is a very large lift."

Once the arch section is secured in place, the jacking system will be lowered to clear the bridge before being transported to a barge slip area back upriver.

Ohio River traffic in the area will be closed during the bridge-moving operation on April 23, according to Flatiron officials. Also, WV Route 2 near the bridge site is expected to be closed at times over the two-day process.

According to the DOH, the tied arch span of the Wellsburg Bridge, made of prefabricated steel, was painted before the bridge was assembled and will remain the brown color it is now.

The Weirton Daily Times also noted that Flatiron is constructing a half-mile long retaining wall south of the future bridge to support the hillside below WV Route 2 to allow the highway to be widened west. The work involves drilling long steel pilings into the hillside and adding wide steel panels between them.

Livestream coverage of the Wellsburg Bridge lift can be found here.