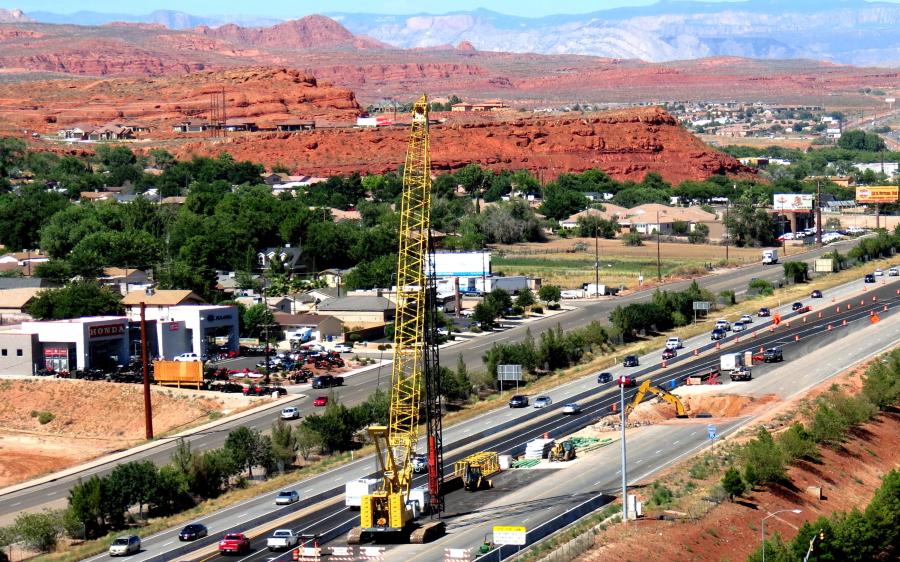 The Utah Department of Transportation (UDOT) announced its Top 10 Projects list for the 2017 construction season.

The Utah Department of Transportation (UDOT) announced its Top 10 Projects list for the 2017 construction season. This year's top project will build five freeway-like interchanges on Bangerter Highway over the next two years. The $249 million project will be completed in late 2018.

UDOT has 180 highway construction projects scheduled across the state this year, with a combined value of $1.3 billion. These projects are designed to keep Utah moving now and in the future by enhancing safety for drivers and pedestrians, improving traffic flow, and maintaining Utah's roads and bridges in good condition.

This year's Top 10 includes three projects in western Salt Lake County, illustrating UDOT's focus on meeting the transportation needs of this fast-growing area. In addition, four of the Top 10 projects are located far from the Wasatch Front in southern and eastern Utah, where these projects will improve vital transportation links for local communities.

• I-215 — 4700 South to S.R. 201, $105 million — Construction continues from last season; scheduled completion late 2017: Crews will complete last year's top project: the reconstruction of the I-215 west belt between S.R. 201 and 4700 South. This includes replacing bridges over S.R. 201, widening the freeway with new exit-only lanes, and upgrading signals and traffic management systems.

• I-15—Brigham Road to Dixie Drive, $28 million — Construction started in January; scheduled completion late 2017: UDOT is adding auxiliary lanes on I-15 in St. George between exits 4 and 5 (Brigham Road and Dixie Drive) as part of a multi-year plan to upgrade I-15 in the St. George area.

• 10600 South Interchange Improvements and Widening, $31 million — Construction starts this spring; scheduled completion spring 2017: This project will add an underpass at the I-15/10600 South interchange to connect the northbound off-ramp to Monroe Street, just west of South Towne Mall. UDOT is also completing maintenance on the 10600 South bridge over I-15, and widening 10600 South from I-15 to Redwood Road.

• Redwood Road, $97 million — Construction starts this spring; scheduled completion late 2018: Three major projects are being constructed this year on Redwood Road: a new diverging diamond interchange at I-215 in North Salt Lake; widening a section between 12600 South and Bangerter Highway from two lanes to seven lanes; and widening a section between 400 South and Stillwater Parkway to five lanes, and adding a new continuous flow intersection at Pioneer Crossing in Saratoga Springs.

• I-80 — 1300 East to Foothill Drive, $12 million — Construction starts this summer; scheduled completion fall 2017: UDOT will repave a 2.5 mi. section of I-80 in Salt Lake City. More than 93,000 vehicles drive this section of I-80 per day, and the project will help extend the useful life of the pavement as well as provide a smoother ride for drivers.

• S. 40 — Myton Bench Widening, $35 million — Construction started in February; scheduled completion fall 2017: This project will widen a 6-mi. section of U.S. 40 to five lanes in Duchesne County. It will include adding new travel lanes, along with 10-ft. shoulders, that will help keep traffic moving safely between the Wasatch Front and the Uinta Basin.

• I-70 — Richfield South to Richfield North, $15 million — Construction starts in May; scheduled completion fall 2017: UDOT is resurfacing 4 mi. on I-70 in Richfield, from the south interchange to the north interchange, and performing bridge maintenance at several locations in the area.