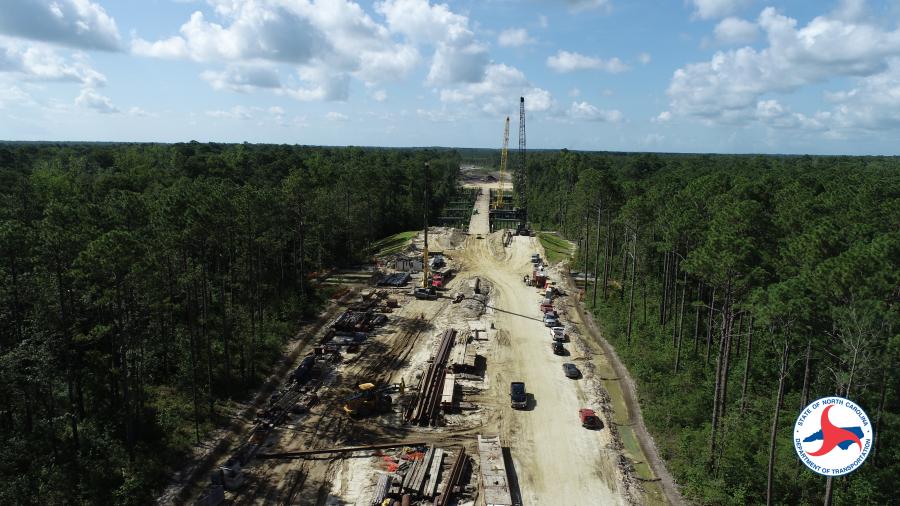 Construction of the dual bridges over the Southwest Prong of Slocum Creek.

Although not an interstate highway, U.S. Highway 70 in eastern North Carolina is steadily being transformed into one.

The highway is already one of the state's most critical transportation arteries. Most of the route across the length of the state is made up of four lanes, while some sections have been converted to freeways.

In North Carolina, U.S. 70 runs 488 mi. east to west from the Atlantic Ocean to the state's mountainous border with Tennessee. Along the way it passes through every region of the Tarheel State, including the Appalachian Mountains, the foothills and the Piedmont Triad and Triangle cities. 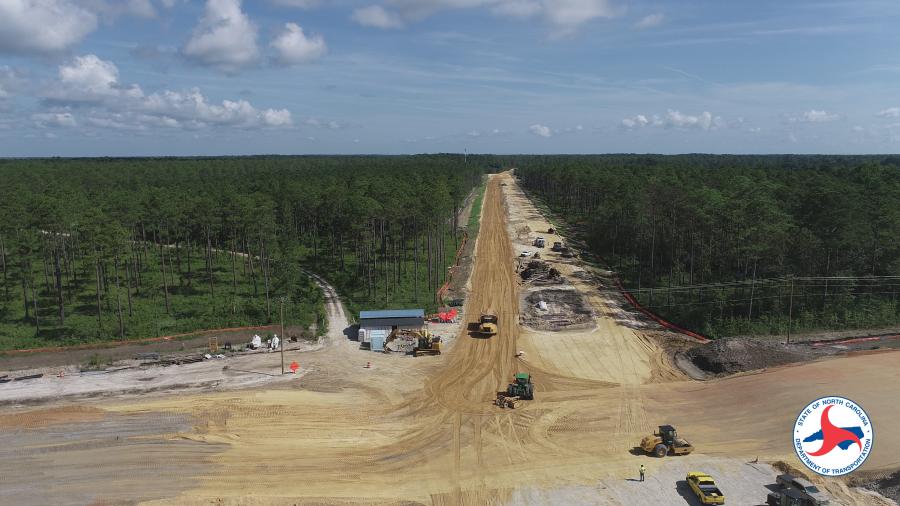 From Raleigh, the U.S. 70 roadway makes its way south and east along the lowlands near the Crystal Coast beaches to its terminus near Cape Lookout.

This highway corridor in the eastern third of the state also serves as a crucial hurricane evacuation, a popular way for beachgoers to reach their destinations and a shipping route to and from the Port of Morehead City. Additionally, a pair of military bases can be accessed from the highway: Seymour Johnson Air Force Base in Goldsboro and the Marine Corps Air Station Cherry Point in Havelock.

With the intent to make U.S. 70 a safer and improved roadway, over the past 20 years, the North Carolina Department of Transportation (NCDOT) has contracted work to place U.S. 70 on an interstate grade freeway. The highway's bypasses around the eastern towns of Clayton and Goldsboro are recent examples of the department's efforts. Both communities experience the highest traffic volumes along the corridor.

Now, NCDOT is overseeing another new U.S. 70 improvement, this one near the coast. The $167 million project in the Craven County town of Havelock will further efforts to convert the highway into an interstate.

The U.S. 70 Havelock Bypass is a 10.3-mi.-long project that encompasses a new four-lane, 46-ft. wide median-divided highway and promises to provide motorists with a high-speed alternative to using U.S. 70 through the small community, which is often hampered by numerous traffic signals at intersecting side streets. 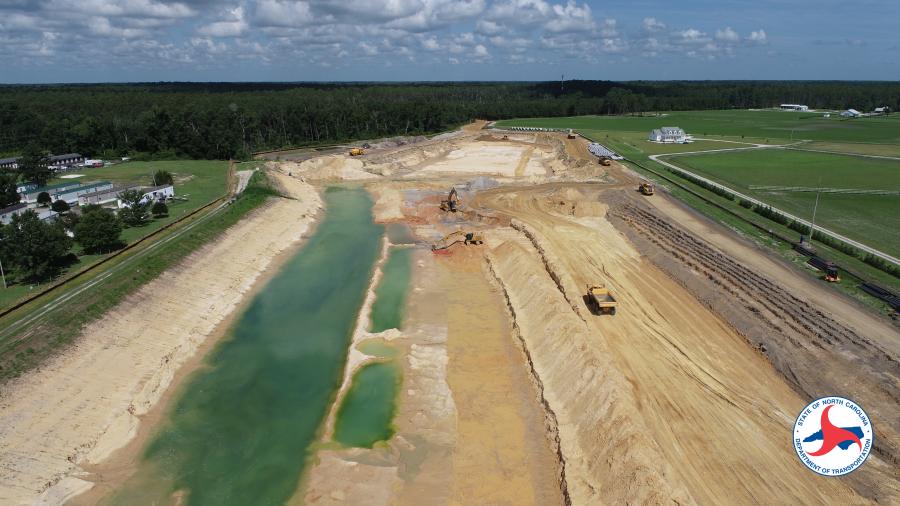 The work zone is in the Croatan National Forest, while Havelock is home to the Cherry Point Marine base — both of which figured into the bypass design, according to NCDOT.

Brad McMannen, the agency's resident engineer in the area, said the bypass is being constructed on the south side of U.S. 70, due to the Marine air station being located on the north edge of Havelock.

"The project is located mostly on new alignment, except for work at the beginning and the end where the two new interchanges are located outside of Havelock: the new interchange at Lake Road and the overpass located at Sunset Boulevard," he explained, adding that the roadway crosses three railroad tracks, intersections that will also need improvements.

As the U.S. 70 bypass runs through a national forest and some wetland areas, years of planning and careful design were required before NCDOT and the Sierra Club signed an agreement in 2018. It allowed the transportation department to proceed with the bypass while addressing project-related conservation concerns associated with the national forest and providing resources for long-term protection of the woodlands.

McMannen added that the prime contractor, Balfour Beatty Infrastructure Inc., has been working at the site for almost a year. The company will build three interchanges; 14 new bridges (six built over railroad tracks); plus raise two existing bridges over the new highway. The bypass will not be constructed in phases, he said, but Balfour Beatty does have a timeframe for how and when to complete the traffic switch onto the new ramps of the interchanges.

The expected completion date for the project is May 2024, but all work except for the vegetation is expected to be complete by November 2023, McMannen reported. By late August, Balfour Beatty had cleared approximately 40 percent of the project, had opened three borrow pits and brought in materials for the roadway.

"The contractor and its subs also have started on two bridge structures by driving piles and pouring caps," McMannen continued, "while also building roadway and placing drainage structures behind the clearing operations."

Balfour Beatty's major subcontracting companies and the services they are providing on the U.S. 70 Havelock Bypass are:

The earth moving, pile driving and asphalt needed for the Havelock Bypass will be extensive, according to McMannen. Approximately 5.8 million cu. yds. of borrow material is to be placed, along with 91,000 linear ft. piles and 252,000 tons of asphalt.

To handle all that material, Balfour Beatty and its crews will be using an armada of construction equipment provided by some of the top dealerships in North Carolina. 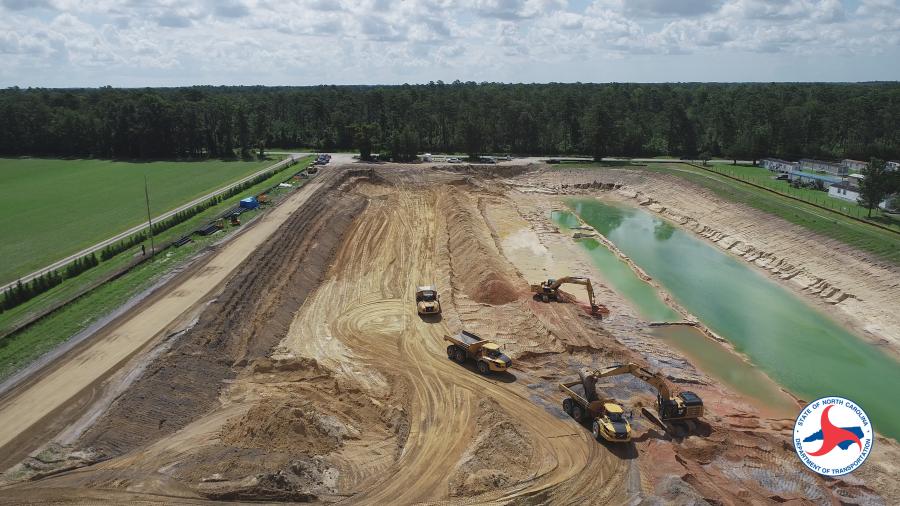 The contractors are using 40- to 45-ton off-road trucks from Cat, Volvo and John Deere for all major borrow hauling, while the excavators and bulldozers will be a mix of Cat, Komatsu and John Deere.

McMannen explained that the cranes utilized on the U.S. 70 Havelock Bypass are a Kobelco 275-ton; a Terex 230-ton; and Grove 70-ton cherry pickers.

"Most of the larger cranes will be rented from Dozier Crane & Machinery, with the smaller cherry pickers and impact hammers being company owned," he said. "The small equipment is either company owned or rented from Sunbelt Rentals and United Rentals."

The NCDOT engineer predicts work on the bypass will require Balfour Beatty to reach a peak of 90 to 110 employees on site around the middle of 2021 through early 2023, with subcontractor crews fluctuating between 10 to 75 crew members during that same period.

In coastal North Carolina, weather is always a key factor in keeping any large-scale construction project on schedule. That is especially true on a green alignment with the length of the U.S. 70 Havelock Bypass.

McMannen explained that earth moving operations on a project that goes through or adjoins wetlands also is a challenging effort but building road structures during the driest months of the year can be even more problematic.

"It's key to keep the structure operations on schedule due to the in-water moratorium associated with the four largest structures on the project," he added. "With the project alignment traversing through the Croatan National Forest, special attention is needed to make sure that there are no environmental impacts outside the right of way."

Route Will One Day Be Interstate 42

When the U.S. 70 Havelock Bypass is finished in four years, it will be among several projects NCDOT has completed, is working on, or has planned to bring the roadway to interstate standards.

One of those projects now in the preliminary stages will improve the highway from the bypass north to the community of Thurman, near New Bern. That $153 million enterprise is set to begin in the winter of 2021-22 and be completed, if all goes to plan, in 2025.

NCDOT's efforts to modernize U.S. 70 in eastern North Carolina paid off in 2016, when the American Association of State Highway and Transportation Officials (AASHTO) assigned the future I-42 designation to the majority of U.S. 70's route southeast of Raleigh all the way to the coast. CEG