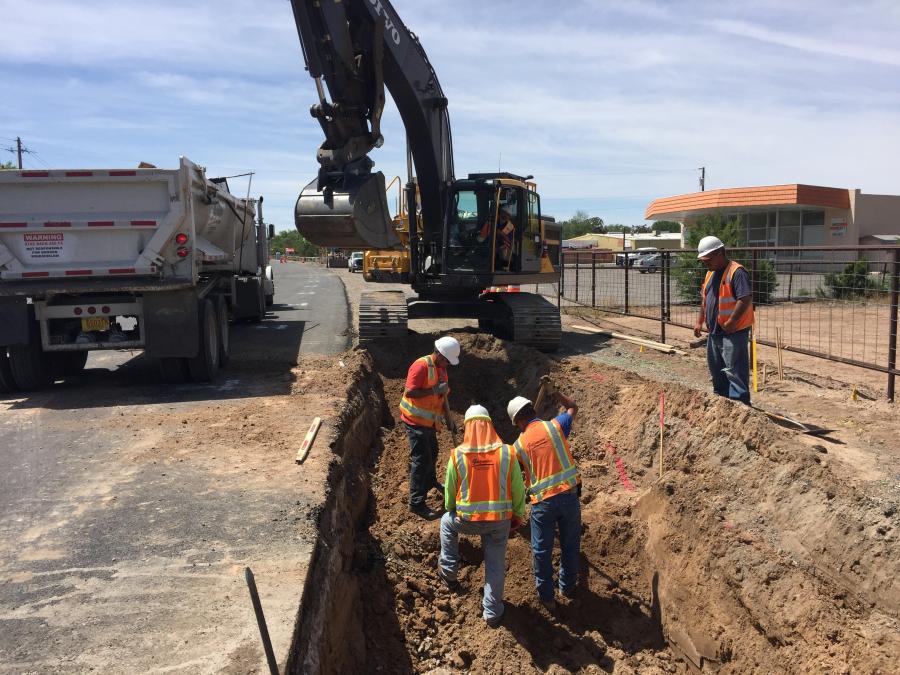 In February, the New Mexico Department of Transportation and AUI Inc., the project contractor, began reconstruction of the NM 47 Peralta roadway corridor from milepost 31.0 to 32.8 through the town of Peralta.

The 1.8-mi. (2.9 km) stretch of highway offered motorists two lanes in each direction, but the new configuration will be expanded to include two northbound and two southbound lanes, with a center turn lane and seven raised medians at intersections identified as high crash areas, according to Bernadette Bell, public relations officer of NMDOT District Three.

Work is expected to be complete by fall 2016. A mix of federal and state funds is being used.

Despite the town of Peralta's rural setting and a population of 3,743, NM 47 had average weekday traffic flows of 25,000 to 30,000 in 2014, according to the most recent data posted by Mid Region Council of Governments, which is the source of the DOT's traffic flow maps.

The reason for the heavy volume, Bell speculated, is due in part to the proximity of neighboring communities like Bosque Farms, Los Lunas, Belen and Valencia.

“As the rural setting of these towns began to grow and businesses came into the area, the corridor became more populated and there was an increased need for safer entries into the businesses and homes that populated the corridor,” said Bell. “Many residents of these rural communities located in Valencia County use this corridor to commute the 20-mile drive to Albuquerque, located to the north.”

Safety along the corridor was a major factor for the reconstruction, she noted.

The project also coincided with the town of Peralta's need to put in a gas line through the corridor. NMDOT, AUI Inc. and the Town of Peralta coordinated the construction so that the initial stages of the work were designated for the gas line.

“Pervious concrete is not only new to this project, but new to the state of New Mexico,” Bell said. “The prime is working diligently to dial in the pervious concrete mix, placement operations and testing procedures, going above and beyond the contract by placing numerous test strips.”

Eight inches of pervious concrete will be in the 5-ft. (1.5 m) bike lane between driving lanes and curb and gutter adjacent to the sidewalk. Buried 4 to 5 ft. (1.2 to 1.5 m) beneath this area is an aggregate box with a 10 mil PVC liner and filter fabric for drainage.

In order to meet the tight timeline, crews averaging 70-90 per day will begin working around the clock seven days a week until completion.

Because the pervious concrete is new to them, crews find it a challenge. Another challenge is the amount of ground water that must be pumped from the site.

Permits were acquired to comply with the Clean Water Act and include the preparation of a Stormwater Pollution Prevention Plan. Crews must take measures to minimize soil erosion and sediment transport, including mitigation measures to protect water quality. At irrigation ditches, construction activities occur during the no-flow periods when the ditch system is dry.

Other environmental issues include compliance with the Migratory Bird Act. Crews are required to re-seed areas with weed-free native plants and grasses.

The Our Lady of Guadalupe Church and Old Peralta School relisted properties near which low-vibratory equipment and vibration monitoring must be used for construction activities.

Noise and air quality also are being closely monitored throughout the project.

Business as Usual … Sort of

Another type of challenge is business and residence access during construction. During the design phase, the design team held two public information meetings as well as three property owner workshops, Bell said. In addition, she added, “The prime contractor communicates with the businesses and residents, letting them know that access will be disturbed and let them know the route that is designated for them.

“The traffic pattern set up for motorists on the first day of construction reduced the roadway from two to one northbound and one southbound lane, but added a center turn lane that did not exist before,” Bell continued.

The next traffic pattern shifted traffic to the west side of the road, and then back to the east as crews constructed the permanent roadway.

Because motorists are not accustomed to having their highway become a work zone, Bell said speeds through the corridor have been an issue.

“The Los Lunas law enforcement have assisted crews by having an officer during work hours [to monitor] speeds and, as a result, has made the corridor safer for everyone,” she said.

Within the first month they issued 23 speeding citations and 10 written warnings. NMDOT is hoping that drivers slow down and locals are hoping construction speeds up.