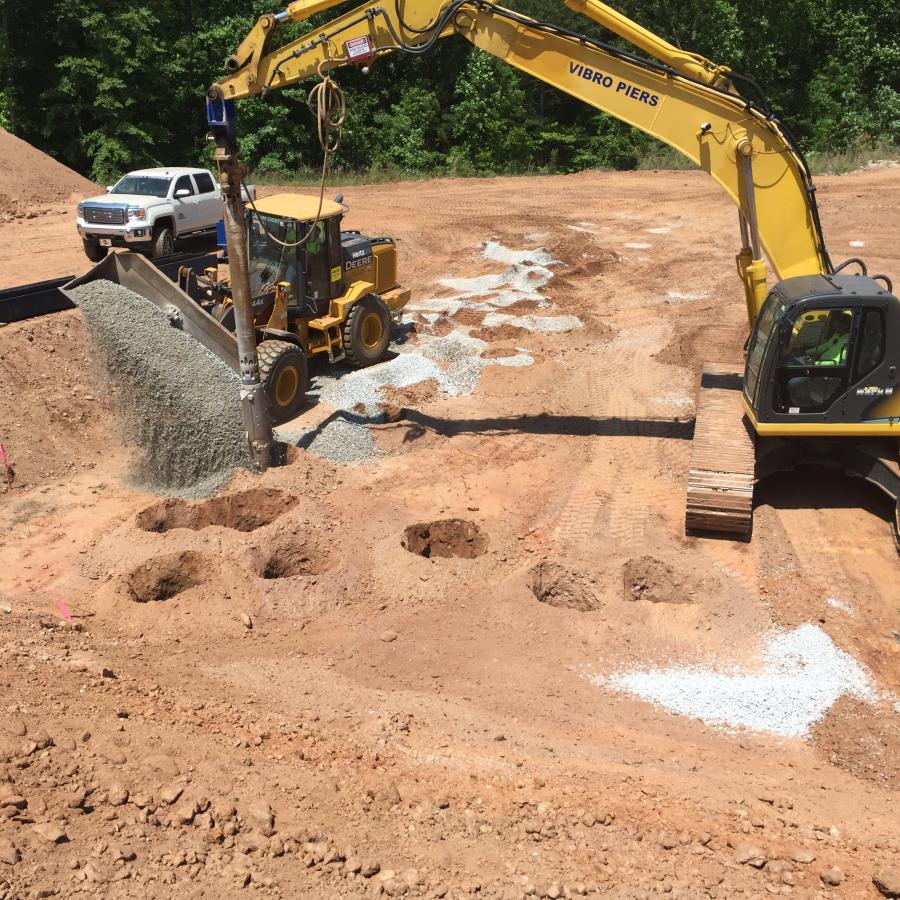 RA-LIN and Associates photo Described as the future of health care in Randolph County, a more than 50,000-sq.-ft. (4,645 sq m), three-story hospital is taking shape in Wedowee, Ala.

Described as the future of health care in Randolph County, a more than 50,000-sq. ft. (4,645 sq m), three-story, $20 million hospital is taking shape in Wedowee, Ala. The new facility is being built on the Tanner/East Alabama campus on South Main Street, where much of the infrastructure to support a contemporary hospital facility is already in place.

“Wedowee Hospital, as it stands today, cannot stand at all much longer,” said Loy Howard, president and CEO of Carrollton, Ga., based Tanner Health System. “The hospital is small and outdated. We have found that updating the building to modern building codes for medical facilities and Americans with Disabilities Act compliance would be prohibitively expensive. Parking is scarce, and there's no helipad to transport the most acute patients to Anniston, Birmingham or Carrollton.”

“It's just not the kind of place many new physicians see themselves wanting to practice. Any attempt to make the improvements to the current Wedowee Hospital would've been hampered by cost. The size of the facility's lot limited any potential future expansion. That's why building a new facility was really the most viable solution to keeping a hospital in Randolph County.”

“We even wanted to give the facility a name that reflects its emerging role as a destination not only for Wedowee and Randolph County, but for the entire region,” said Howard. “People from throughout the region will be traveling into Randolph County for care, and Tanner Medical Center/East Alabama reflects that regional appeal.

“Tanner has supported improving health care in Randolph County for years. We operate two medical practices in Randolph County. Woodland Family Healthcare and Tanner Primary Care of Wedowee, formerly the Wedowee Clinic, are each part of Tanner Medical Group, and Tanner has already invested more than $7 million in a brick-and-mortar commitment to the region through the construction of Tanner/East Alabama.”

Getting the current project off the ground, however, was no small task. To finance building the new structure, Tanner and community leaders took the issue to the county's voters, seeking approval of a special purpose sales tax to raise funds for the hospital's construction. Tanner would manage, staff and outfit it, if residents covered the cost of construction.

Efforts by locally organized community groups made the difference. The referendum to build a new hospital in Randolph County received overwhelming support from the voters, with more than 86 percent backing the proposal.

“We're proud to partner with the Randolph County community to keep a local hospital in the county, and we're grateful for their support. A local hospital is more than convenience — it's jobs, it's economic investment and it's an assurance that timely care is available when a loved one needs it.”

Howard said discussions about partnering with the Randolph County community date back almost two decades, when he and a family practice physician with Woodland Family Healthcare began discussing ways the community and the health system could work together.

Randolph Medical Center shut down in 2011, which had a significant impact on the area.

“The closing of the hospital in Roanoke was a real blow for the community,” said Howard. “It's also one of the factors that made it so critical to keep the hospital in Wedowee.

“The reason a new hospital is being built in Wedowee is because the people know what an asset it is for their community. You don't have to look far anywhere in the Southeast to see communities who suffer after their hospitals close.”

In May, 2016, more than 250 Randolph County residents, community leaders and employees from Tanner Health System gathered to mark the start of construction. The building will be the fifth hospital in the Tanner system, joining Tanner Medical Center/Carrollton, Tanner Medical Center/Villa Rica, Higgins General Hospital in Bremen, Ga., and the inpatient behavioral health facility Willowbrooke at Tanner in Villa Rica.

“Hospitals are similar in many respects to other types of buildings,” said Stewart. “The challenge is further compounded when the project involves adding to an operational health care facility. Hospitals have special systems that are required for the diagnosis, treatment and safety of patients. In addition to complying with the typical building codes, hospitals are required to comply with several specialized codes.”

For the various teams involved in construction, planning was extremely important.

“A good set of design documents, constant communication with the end users and experienced subcontractors are essential. Hospitals are open 365 days per year, all day and all night. The facility must be designed and constructed to meet this demand.”

“We excavated a large onsite retention pond, and a majority of the onsite borrow was suitable structural fill material used as backfill for large modular block retaining walls. Another excavation was the basement/ground level that will house the central energy plant for the new hospital,” said Stewart.

Two large site retaining walls had to be constructed as part of the site development to allow infrastructure for the new facility and laydown area for construction activities.

“The site was a green field adjacent to an existing medical facility. Work included minimal site demolition, for the upper level building pad and existing parking lot tie-in. Veneer demolition was required to allow new construction tie-in and a three-hour separation wall to be installed between the existing building and new hospital.”

Key tasks yet to be carried out involve completion of the dry-in, including installation of view dynamic glazing and coordination of in-wall and overhead requirements for medical equipment. Stewart said throughout construction, attention to detail is crucial.

“Medical facilities are highly technical in nature. Extreme care has to be given to construction quality and operations. All the systems need to work flawlessly and communicate seamlessly. Particular attention must be given to infection control,” said Stewart.

So far, the elements have not been a concern for crews.

As work on the project continues, being mindful of unnecessary waste can't be stressed enough.

“RA-LIN consistently looks for ways to achieve sustainability. As an example, we divert construction waste from landfills through agreements with the local waste handler to recycle the concrete and masonry debris saving tons of waste from entering landfills,” said Stewart.

The building also is designed to have an air barrier under the exterior finishes.

“This helps seal the building envelope and improve indoor air quality. The mechanical systems are designed to be highly efficient reducing operating costs and power consumption. The building utilizes LED lighting technology with sensors to turn lighting off when no occupants are present,” said Stewart.

“Tanner Hospital in Wedowee is also using a new technology called dynamic glazing. The windows are designed and constructed to allow for pre-programmed tinting to occur throughout the day. This eliminates the need for blinds, and allows light in when needed and keeps unwanted light and heat out. This technology reduces the heat load transferred into the building by sunlight, and contributes to higher air conditioning system efficiency.”

For the creative team, the new facility presented a mix of challenges. According to Scott Meade, AIA, a senior health care architect of Earl Architects, “Our vision for the new Wedowee hospital was to design a modern, state-of-the-art replacement hospital that's appropriately sized and budgeted within a rural community setting, while providing the same high-level quality of care that's found in larger health care campuses across the country.

“As with many of our successfully completed rural community hospital projects, we understand the very fine balance between managing a limited project budget, while also designing a right-sized health care facility that will meet the current and future needs of the community. At Tanner Medical Center East Alabama, we challenged ourselves to appropriately apply the budget to those specific areas that have the most significant impact towards enhancing the overall patient/staff experience.”

Meade said making the most of outdoor influences is a plus when designing an optimal healing environment.

“At Tanner Medical Center/East Alabama , we've taken full advantage of highlighting these natural elements. The large glass facades and windows share the surrounding views of nature, while providing plenty of natural daylight to enter throughout the new hospital.”

The new structure embraces a modern-lodge architectural style to reflect the surrounding lake community. The main exterior is a combination of glass, steel, stone and block that matches the existing architecture on the site.

Meade said having worked on numerous hospitals was helpful in taking on the Wedowee project.

“During the design phase, we conduct solar simulation studies using our Building Information Modeling (BIM) software to properly position the hospital on the site. Many areas of the hospital also include LEED and LEAN Guidelines, such as work-flow circulation efficiencies, as well as flexibility for future expansion.

“The roof area over the first floor was preserved for future expansion to allow the footprint of the patient floor to grow easily by strategically locating rooftop mechanical systems, and simultaneously limiting disruption of services. Another sustainable feature includes LED lighting throughout the new hospital with occupancy sensors to help conserve energy.”

As the project moves closer to completion, Meade hopes individuals admitted to or those who work at the new facility will appreciate his firm's commitment to excellence.

“Our takeaway goal is that when patients and staff experience the Tanner Medical Center East Alabama Hospital, they gain a sense of pride and ownership, and promote a setting where staff can be proud to deliver world-class care effectively and efficiently, while allowing patients to heal comfortably and quickly. Earl Architects is proud to be a valued partner with Randolph County and Tanner Health System. We are honored to be part of this exciting team that has successfully achieved the vision towards making the new hospital a reality,” said Meade. —CEG