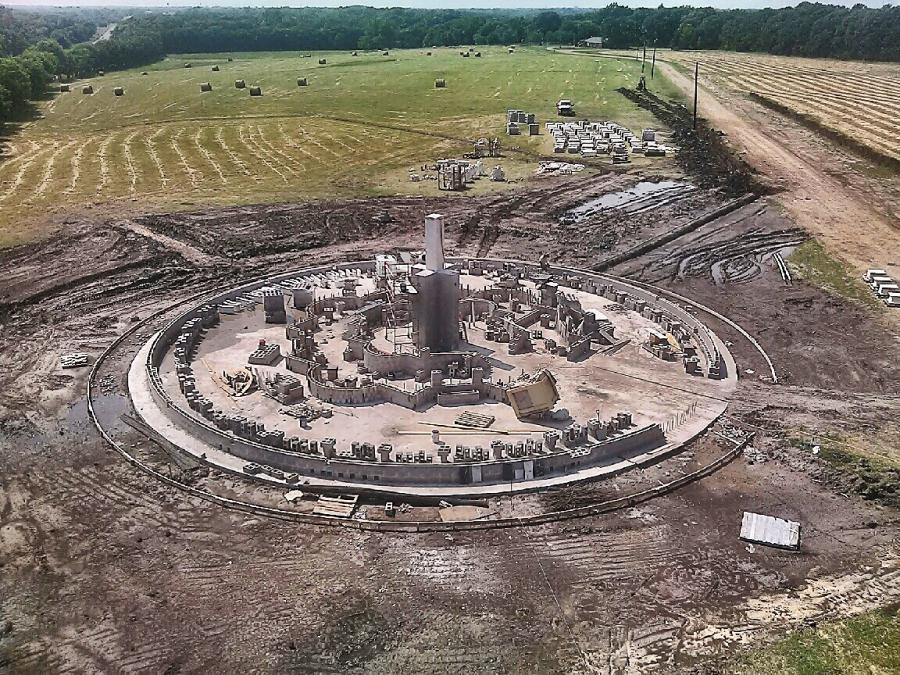 Construction is currently under way on one of the largest fountains in the world at Trident Lakes, and the entrance will include a marble, ornate Poseidon statue.

A private resort community like no other is in the early stages of being built in Fannin County, Texas.

Trident Lakes is a $300 million project which is being developed Vintuary Holdings Corp. of Dallas, Texas. It will offer upscale amenities and unprecedented civilian security on 700 acres between Savoy and Ector along Texas State Highway 56.

“It's a five-star playground with DEFCON 1 preparedness,” said Paul Salfen, the community's spokesman and director of celebrity relations. “Our residents will enjoy a piece a paradise and peace of mind.”

Construction is currently under way on one of the largest fountains in the world at Trident Lakes, and the entrance will include a marble, ornate Poseidon statue.

According to a press release, the heart of Trident Lakes will be safety and sustainability. The property will be protected by a security wall which will enclose approximately 400 reinforced, subterranean luxury condominiums ranging from 900 to 3,600 sq. ft., communal greenhouses, a navigable tunnel system, a DNA vault and helipads. It also will feature off-the-grid supplies of food, water and electricity.

“During our research several things became very clear,” said James O'Connor, Vintuary Holdings CEO. “People of all responsible social backgrounds instinctually think about long-term survival, but simply are too busy or do not have the skill sets to assemble all the ingredients necessary to increase the odds of survival if threatened by a catastrophic event.”

In an effort to build a safe, sustainable neighborhood, Trident Lakes will reportedly offer special financing to law enforcement, teachers and other civil servants.

“A lot of like-minded people who would be critical assets in adverse situations may not be able to afford the costs,” O'Connor said. “We've built in a program to ensure the inclusion of those that could contribute to the structure of the community in a time of need.”

Trident Lakes' fountain will measure 55,000 sq. ft., with the Poseidon centerpiece at its heart.

“The fountain, in its final form, will be one of the largest in the world,” said Charles Ralph, Trident Lakes' lead architect. “Poseidon is big and bold, and he sets the tone for the entire community. This level of quality will shine throughout. It's going to be a place people enjoy, but also depend on.”

The resort is touted as “part private resort/part safe haven,” with a three-pronged philosophy of “Plan, Protect, Play.”

Approximately 400 earth-covered, terraced condos with three unique floor plans ranging from 900 to 3,600-sq. ft. will all provide patio views of one of the site's three lagoons.

The price tag for a condo will reportedly align with the cost of an affluent second or vacation home.

National celebrities will highlight the first wave of residents, according to the website. Phase I , which is the first of three planned subdivisions, will be via invitation-only. The Phase II waiting list is open to public and is currently being filled at TridentLakes.com.

Recently, Trident Lakes had announced that former U.S. Navy SEAL and decorated security diplomat Robert I. Kaneiss would serve as its chief security officer, but accepted his resignation a month later so he could accept a high-level advisory role in a joint venture between the governments of the United States and Somalia. Officials announced that they would immediately commence a search for his replacement.

O'Connor said that Trident Lakes will consider internal and external candidates for its next CSO.

“Obviously, we're sad to see Rob leave as he has been an integral part of our early development,” O'Connor said. “But at the same time, we understand and appreciate his service and commitment to the United States government here and abroad.” CEG