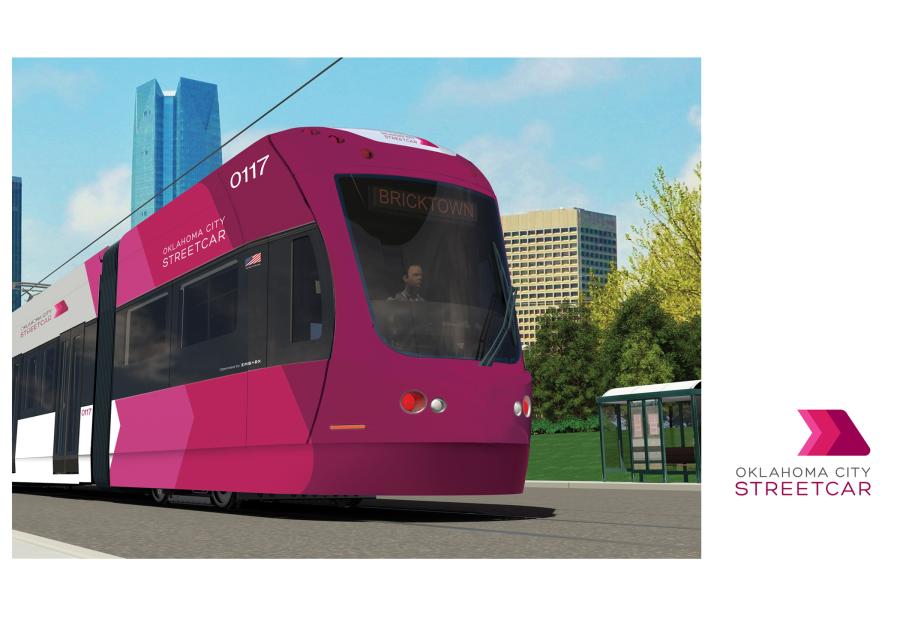 OKC Streetcar will link important districts in and around downtown Oklahoma City.

The first streetcar system in Oklahoma City, Okla., since the 1940s is becoming a reality.

“The MAPS 3 OKC Streetcar is one of the most ambitious projects in Oklahoma City's history, and it will forever transform the way we live, shop, work, play, eat and get around downtown and the surrounding districts,” said Mayor Mick Cornett. “We can expect to create memorable public spaces and increased private development like locally-owned shops, restaurants and more housing options.”

Among those joining Cornett at the groundbreaking were Ward 6 Councilwoman Meg Salyer; Ward 7 Councilman John A. Pettis Jr.; and MAPS 3 Citizens Advisory Board Chairman Tom McDaniel.

The ceremonial groundbreaking kicks off about two years of construction and testing on tracks in and around downtown Oklahoma City, with OKC Streetcar service is scheduled to begin in 2018.

The full dollar amount of the project is $50,000,586.61, and the contract was awarded to Herzog Stacey Witbeck. The project budget is $131 million and includes a storage and maintenance facility already under construction at SW 7th Street and Hudson Avenue.

According to Brent Ward of Oklahoma City, one of the challenging aspects of the job involves “the scheduling of work due to many moving parts of construction that will be affected by many outside activities in the city, i.e. the Memorial Run, parades, the Thunder games, baseball games, etc.”

“The project involves daily coordination for a flexible schedule due to the many moving parts, and traffic management challenges, and excellent communication skills to work with the many businesses affected,” Ward said.

The groundbreaking was held on Sheridan in front of The Melting Pot in Bricktown, which the OKC Streetcar will link with the central business district, Automobile Alley, Midtown, Chesapeake Energy Arena, Myriad Botanical Gardens and the future MAPS 3 Downtown Public Park and Convention Center.

EMBARK will operate the OKC Streetcar as part of the city's public transit system.

The OKC Streetcar will serve 22 stops with five streetcars, which will ride on rails flush with the street. The streetcars use overhead wires for electric power on part of the route, and batteries for the rest.

The streetcar will use city streets in the same way as other vehicles, obeying traffic signals and other rules of the road. EMBARK is developing a safety campaign to educate drivers, pedestrians and cyclists how to avoid accidents once streetcar service begins.

There will be six streetcars, and each will hold approximately 100 people. EMBARK's prominent color palettes for each streetcar are Bermuda green, clear sky blue and Redbud. There will be two of each color.

“Our use of color is bold and modern,” said Jason Ferbrache, EMBARK administrator. “It's significant of where we are as a city — our growth over the past decade, and reflects EMBARK's bold optimism. Stakeholders told us they wanted modern, forward-thinking, unique and approachable. That's what we delivered.”

The streetcars are being built in the USA by Brookville Equipment Corp. of Pennsylvania. Project consultants include ADG, Jacobs Engineering, AECOM and SOJ. EMBARK is negotiating a contract with Herzog Transit Services for managing the OKC Streetcar's day-to-day operations.