The replacement houses are part of the city’s controversial $2.2 billion Hurricane Sandy rebuilding program for homeowners, which is funded through federal aid. 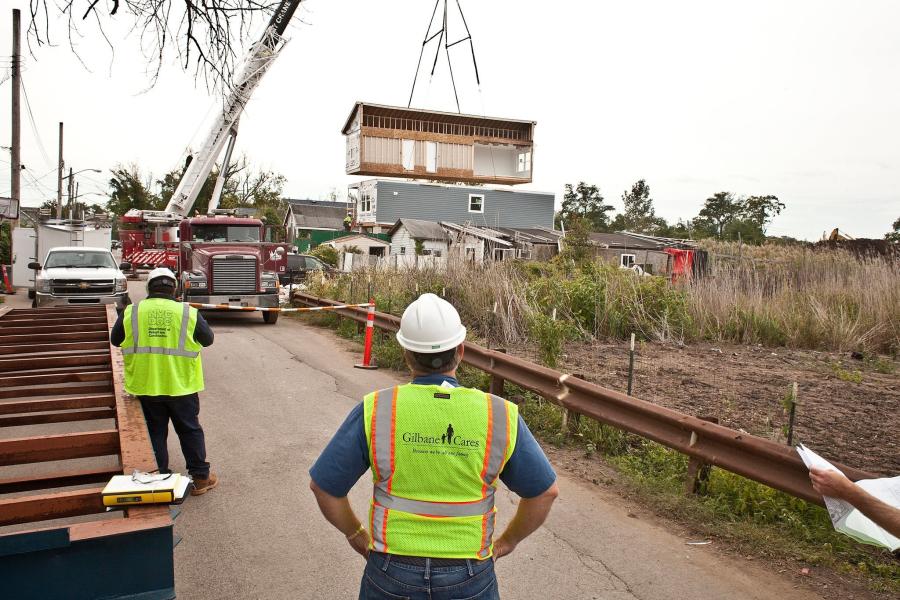 Each one was lifted by crane and set atop concrete pillars in Midland Beach, a neighborhood on Staten Island that was swamped by Hurricane Sandy. Then the pieces were strapped and bolted together like giant Lego blocks to make a Cape Cod-style house.

Inside, the rooms were larger than expected with gleaming hardwood floors, freshly painted walls and wide open views beyond the neighborhood to the One World Trade Center skyscraper in Lower Manhattan.

“I feel like I'm on HGTV — one of those shows where they do new homes for people,” said Fisher, a hospital clerical worker who lost her home to Hurricane Sandy's devastating flooding.

Five years after the storm ravaged the region, New York City is resorting to modular houses as a faster and cheaper alternative to rebuilding on site from scratch. The replacement houses are part of the city's controversial $2.2 billion Hurricane Sandy rebuilding program for homeowners, which is funded through federal aid.

It is the largest such effort in the nation and expands the use of modular homes in disaster recovery programs from a stopgap measure to a permanent rebuilding solution, according to city officials and industry experts. Modular homes — not to be confused with trailer homes — are built to the same standards as traditional houses and look no different when fully assembled and connected to water and utility lines.

City officials have embraced modular homes for hard hit neighborhoods on Staten Island and in Queens as the Build It Back program is winding down. From the start in 2013, the program was plagued by miscommunication, endless red tape and spiraling costs that left thousands of frustrated homeowners in limbo for years and drew condemnation from elected officials and community leaders. Mayor Bill de Blasio's administration had set a goal of completing work on single-family homes by the end of 2016, only to later backtrack amid challenges such as a shortage of architects and contractors.

The program has significantly picked up the pace in the past year after taking steps to streamline building and zoning requirements, broaden the pool of contractors and introduce modular homes to simplify and speed up the design and construction process.

City officials said that 87 percent of the 8,300 homeowners who enrolled in Build It Back have received benefits ranging from a reimbursement check for minor repairs to an entirely rebuilt house. Nearly everyone else is expected to receive their assistance by March.

“It's really turned around in the last year and you can see that walking through these communities,” said Amy Peterson, the director of the Mayor's Office of Housing Recovery Operations, who oversees the program.

Most of the remaining homeowners in the program require extensive work. As of October, the city has finished 189 out of a total of 500 houses that will be rebuilt through the program, or three times more than the 53 houses that were finished a year ago. It also has finished 370 out of a total of 850 homes that will be elevated, or six times more than the 58 elevations a year ago.

Steven Zboinski, whose house on Staten Island is being rebuilt, said the program was finally working. He still remembers submitting required documents in the beginning, only to be told that they had been lost. Soon he was making 10 copies of everything.

“It took off to a very bad start and now it's come back to something that's actually getting things done,” he said.

But City Councilman Mark Treyger, the chairman of the council's recovery and resiliency committee, said that despite recent improvements, the Build It Back program overall has been plodding and limited. He said that too many homeowners never enrolled because they did not know about it or had language barriers, while others dropped out after becoming stymied by conflicting and confusing information. As a result, he said, many have depleted their savings, remain stuck in temporary housing and face a desperate future.

“Yes, progress has been made but it should not be celebrated because we have a long way to go,” said Treyger, a Democrat who represents storm-battered Coney Island, Sea Gate and Gravesend in Brooklyn. He has called for the city to reopen the program to more applicants.

City officials said that more than 20,000 people initially registered for Build It Back, most of whom lived in Queens, Brooklyn and Staten Island. Of those, about half never finished the application process and program workers were later dispatched to reach out to them. In 2015, they contacted 4,000 homeowners, 599 of whom returned to the program.

The long process to rebuild has aggravated many families. Marcos Baez, said he stayed in a shelter for months after Hurricane Sandy while his family's house on Staten Island was made temporarily habitable. Now he has moved out again while waiting for a new modular home.

“It's just stressful,” he said. “I'm displaced again by Sandy for the second time.”

Outside the city, New York State's disaster recovery program has awarded more than $1.1 billion in grants to 11,900 homeowners to rebuild, repair and make homes more storm-resilient. Of those homeowners, 66 percent have completed construction, including elevating 1,300 of what will eventually be 3,500 homes.

These programs also have drawn criticism for taking too long to help homeowners and not doing enough in many cases.

“It's not over — there are still families that are struggling to get home,” said Amanda Devecka-Rinear, director of the New Jersey Resource Project, an advocacy group that has documented continuing problems in a new report.

Across the country, homeowners have increasingly turned to modular units to rebuild after a disaster, said Tom Hardiman, executive director of the Modular Home Builders Association, an industry group. Modular homes are more durable than traditional homes, he said, because the individual units, when stacked together, reinforce one another with, say, two layers of interior walls instead of one.

Modular units have existed, in one form or another, for more than a century, and include early kit homes sold by Sears, Roebuck and Company and ready-made homes for World War I munitions workers in Nitro, W.Va. Today, modular units are increasingly sought for large-scale housing, ranging from Marriott hotels to apartments for Google employees.

In New York City, modular homes are expected to improve the rebuilding process, said Lou Mendes, chief operating officer of the Mayor's Office of Housing Recovery Operations. In the past, there have been delays because the extent of damage to an existing house was not known until it was already elevated, requiring major structural repairs to be made in the air.

Modular homes not only eliminate such surprises, but they also save time because they are based on prototype designs and allow for the foundation and the house to be built at the same time, rather than one after the other. Mendes said that he aims to have a homeowner in a modular home in four to six months.

The benefits extend to the entire rebuilding program, city officials said. Since modular homes require only minimal work — to add staircases and finishes — local contractors are available for more projects. Modular homes are also about 25 percent cheaper than site-built homes, saving $175,00 to $200,000 per home, according to city estimates.

Still, modular is not the answer in every case. Utility wires or trees can block a site, or the street can be too narrow to accommodate a crane or a truck carrying a house.

Some homeowners also have rejected a modular home, despite efforts by Build It Back's architects and engineers to educate them about what it is, and is not. On visits to modular houses, homeowners have banged on the walls to make sure they are solid.

Fisher said she did not know if she wanted to go modular but decided to take a chance. Working with the city, she picked out the gray-blue color of the 1,652-square-foot house as well as the roof shingles, floors, cabinets and countertops.

She has no complaints, she said.