TEDAC was established in 2003 to serve as the single interagency organization to receive, fully analyze and exploit all terrorist improvised explosive devices of interest to the United States. 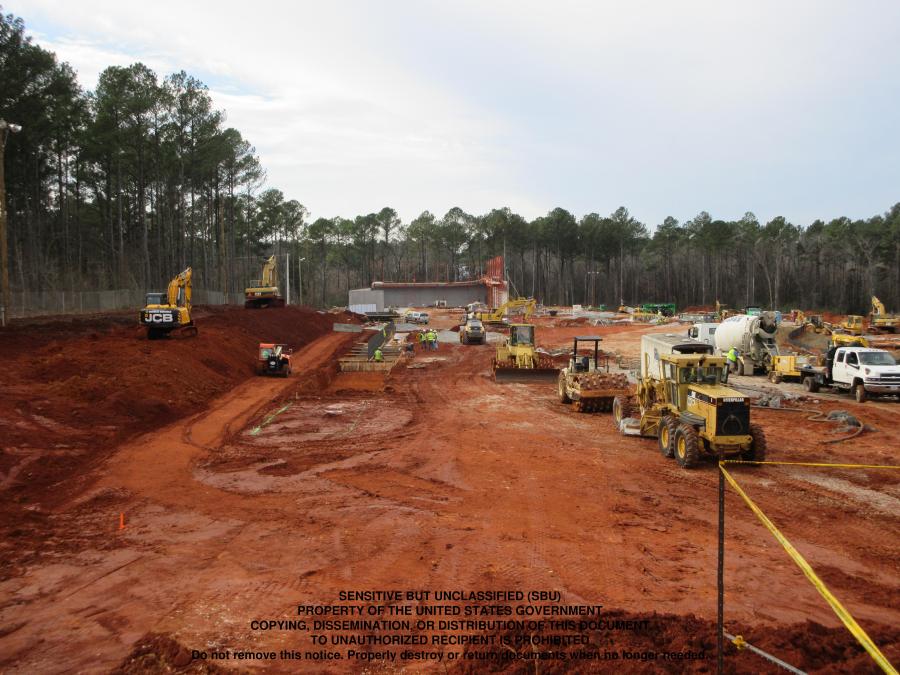 Construction efforts continue at the Redstone Arsenal in Huntsville, Ala., on Phase III of the Terrorist Explosive Device Analytical Center (TEDAC).

Construction efforts continue at the Redstone Arsenal in Huntsville, Ala., on Phase III of the Terrorist Explosive Device Analytical Center (TEDAC). TEDAC was established in 2003 to serve as the single interagency organization to receive, fully analyze and exploit all terrorist improvised explosive devices of interest to the United States. The Center performs IED exploitation using both established and novel forensic techniques and performs these activities in a high-capacity, multi-agency, collaborative environment using experienced scientists, engineers, and technicians.

“This project is so interesting because of all the security requirements, and knowing that we are assisting with fighting the war on terror,” said Crystal Lucas, P.E., project manager of general contractor Turner Construction, an international construction services company that maintains an office in Huntsville. “The biggest challenge was meeting the aggressive schedule on a design-build project with client-driven changes based on real-time needs.”

Composed of 30 partner agencies, including the FBI, the Department of Defense and the Department of Homeland Security, TEDAC was formerly based at the FBI laboratory in Quantico, Va. The relocation to Alabama centralizes the government's efforts regarding IEDs and terrorism. Redstone Arsenal is home to the FBI's Hazardous Devices School, the ATF's National Center for Explosives Training and Research and other operations.

In February 2016, James Comey, FBI Director, joined Alabama U.S. Sen. Richard Shelby and Lt. General Larry Wyche in a ribbon cutting that officially opened the new TEDAC facilities. Greg Carl, TEDAC director also was in attendance, along with other officials. The latest construction taking place is a significant addition, according to Chris Colster, a public affairs officer of the U.S. Army Garrison, Redstone.

“We welcome the increasing FBI presence on Redstone Arsenal, and appreciate the value that they add to our team, community and our nation's defense,” said Colster. “As we transition as 'America's Garrison of the Future,' the synergy that exists here will be more and more critical, and the expansion of the FBI TEDAC brings new and needed capability to our team.”

The current multi-million dollar project taking shape is managed by the U.S. Army Corps of Engineers (USACE). Turner Construction has worked on numerous USACE projects in the Huntsville area and on Redstone Arsenal's campus.

The TEDAC job was awarded in April 2015, with Phase III construction expected to be completed by mid-March 2017. Work began on site in August 2015, with design work starting in May 2015.

“The repository is substantially complete, and everything is going fine,” said Lucas. “The repository is in final finishes and final cleaning stage. The collaboration center and visitors screening facility are in the MEP rough-in stage.”

Lucas said attention to detail is crucial during construction, adding that the work is different from more traditional projects her firm has been responsible for completing.

“The security requirements and access to the site make this project unique, along with all the STC-rated walls.”

Wade Wooley, P.E., area engineer, North Regional Area Office, U.S. Army Corps of Engineers, said every effort is being made to meet an aggressive construction schedule. Wooley noted that working on three separate facilities requires a great deal of focus and the ability to multi-task.

“For the repository, crews are currently working on shelving installation in the warehouse, along with finishing work ongoing in file storage, administration and the café. Collaboration work includes MEP rough-in and interior wall erection and finishing. Crews also are awaiting permanent power in order to energize equipment for the visitors screening facility.

“Site prep, structure, exterior walls and roofing are complete on all three buildings,” said Wooley. “MEP rough-in for the repository is complete, as is HVAC operational, lighting and final painting in the warehouse area. Café equipment also has been installed.

For the collaboration building, mechanical equipment set on roof and curtain wall installation are nearing completion, while the MEP rough-in and interior walls are erected and partially finished on the visitors screening facility.

Building the 28,500-sq. ft. (2,647 sq m) collaboration center requires close coordination of subcontractors, due to topography. The back side of the building has several feet of backfill, making waterproofing critical prior to backfill work. In addition, early completion of the roof was needed so that installation of roof-mounted equipment could begin as soon as possible.

Wooley said the 700 sq. ft. (65 sq m) visitors screening facility is small and involves relatively simple construction; however, the concern is that it would be easy to underestimate the time required to construct it, and therefore, fail to properly schedule resources needed to complete the structure on schedule.

According to Wooley, the aggressive schedule for the 28,000 sq. ft. (2,601 sq m) repository required collaborative review and early approval of the design, in order to meet the delivery schedule. As with the collaboration facility, the back side of the building required attention to detail in applying waterproofing in preparation for backfill.

Key tasks yet to be carried out on the project include the shelving in the repository warehouse, testing and commissioning of HVAC, testing electrical systems, air barrier, café equipment and completing of the exterior metal panels. The collaboration structure still needs interior finishes, installation of furniture, ceiling work, as well HVAC and air barrier testing. Many of the same tasks are required for the visitors screening facility.

Wooley said the elements have had very little impact, so far.

“Initial site work was being performed in winter 2015/​20​16, so a few days were lost due to weather, but nothing significant. ​There's no reason to expect weather to be a concern going forward.”

While preparing the wooded site for new construction, environmental clearances were required to avoid small areas of archaeological significance. Sub-surface stabilization also was needed under a portion of the site.

Regarding the necessary clearing and grading on the project, “The Army sells all marketable timber, so coordination was necessary to have the Army remove timber in a timely manner, to avoid impact to the start of construction. Coordination went well. Some unsuitable soil was discovered, but nothing out of the ordinary, said Wooley.

“There's nothing unusual about the structures, methods of construction, or materials used; however, site security is a bit more stringent than on many construction sites. A vetting process is used to clear all construction personnel prior to access to the site. The contractor has to be diligent in planning work to assure adequate time is allowed for the clearance process.​”​

Heavy machinery being used to complete the TEDAC structures includes dozers, trackhoes, dump trucks and vibratory sheeps-foot compactors for the site work. Mobile and steel-track cranes were used for steel erection. Some of the main materials being used during Phase III construction include concrete slab-on-grade, precast and/or masonry with metal wall panels, standard drywall finishes in most areas and a curtain-wall system.

“As with most projects, finish work, such as trim, paint, door/hardware adjustments, take much more time than rough-in. Also, final connection and testing of communications network will require careful attention to detail to assure the system is operating properly,” said Wooley.

The project will bring greater exposure to TEDAC's ongoing efforts. Before its creation, no single government entity was responsible for analyzing and exploiting intelligence gleaned from improvised explosive devices. Since then, TEDAC has examined more than 105,000 IEDs from around the globe, providing intelligence to the military, law enforcement and the intelligence community at home and abroad.

TEDAC includes representatives from the Department of Justice, international partner agencies and members of the intelligence community. It coordinates efforts from law enforcement to intelligence to military, to gather and share intelligence about these devices, along with helping to disarm and disrupt IEDs and linking them to their makers and preventing future attacks.

For more than a decade, TEDAC has proven to be a crucial tool in the war on terror. The FBI and its partners at Redstone Arsenal — alongside the FBI's Hazardous Devices School and the ATF's National Center for Explosives Training and Research — join to advance TEDAC's mission by enhancing collaboration and further strengthening a government-wide approach to countering IEDs and other explosives threats.

As work continues on the latest stage of TEDAC construction, those involved with the project are pleased with the work that's taken place so far. The final phase of the new facilities is expected to be completed sometime in 2020. CEG