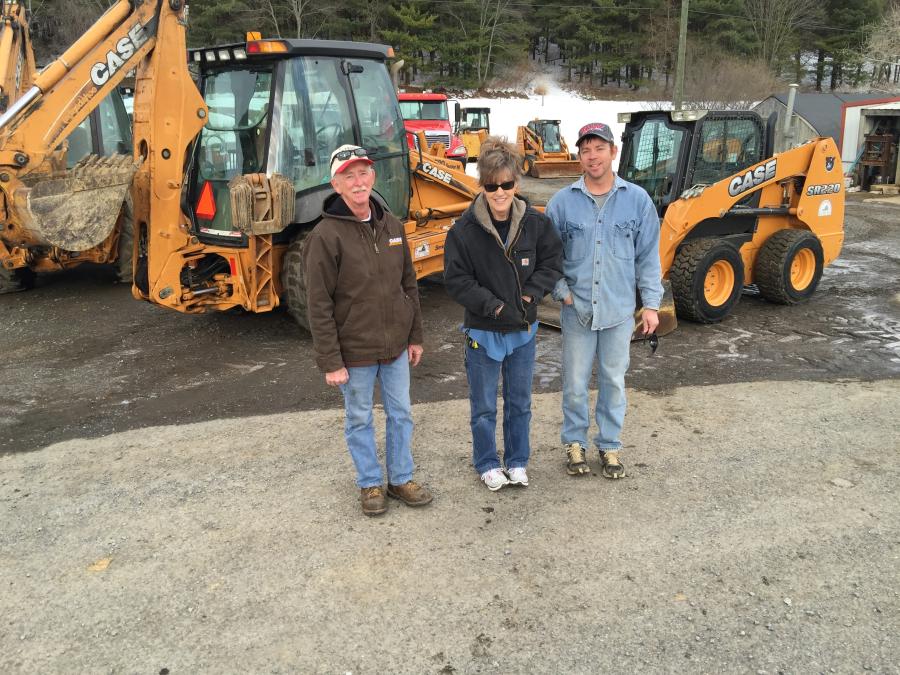 (L-R): Monte, Donna and their son, Monte, or “Boogie” as he is better known, started the company with a Case backhoe and have relied on Case Equipment through the years.

Their goal was simple: to work hard and give themselves, and their children, a happy life.

So, the Virginia couple left their jobs and opened their own company, which they knew meant enduring long hours and taking on more work than others thought possible.

Now, after 30 years, Atkins Excavating in Greenville, Va., is a prosperous “mom n pop” business, as Monte calls it. In that time, the business has built an outstanding reputation among its clients and customers throughout central Virginia.

Typically, the company puts in 6 to 8-in. (15 to 20 cm) mains in cities and towns throughout the area, such as in Staunton, where it is starting a water line, storm sewer and sanitary sewer project that will last for six months.

“The Staunton job is about a $1 million project,” Monte Atkins said. “There is about 700 to 800 feet of storm drain, 300 feet of water line and probably about 600 feet of sanitary sewer. We will have to close down the street, install a bypass pump around the sewer and notify the residents about closing down the water lines and street, as well as detour traffic.”

He added that his company does two or three similar projects a year, each averaging around $1 million to $2 million.

Atkins also does other work, such as excavating for bridge and road projects, stream restoration and has been contracted by the Virginia DOT to remove snow for almost 30 years.

From the very beginning, Monte Atkins has used Case backhoes in his work and is very loyal to the brand. As his firm has slowly grown, he has upgraded from Case backhoes to Case excavators and bulldozers. He now has 10 pieces of Case equipment in his stock.

He also has a Case dealer that he is very devoted to: Lawrence Equipment, with locations across central Virginia.

Case machines and Lawrence Equipment are a good fit for Atkins because they help him handle the tough rock that his crews often encounter in their work.

“Here in the Piedmont area of the state, west of the Blue Ridge Mountains, the rock is about 18 inches deep,” he said. “On the other side of the mountains in Charlottesville, it is 6 to 7 feet deep. But, Case and Lawrence supply all of our machines with really strong rock claws and hammers so we are able to effectively deal with it.”

What really impresses Atkins and keeps him coming back is the dedicated service that Lawrence Equipment gives his company.

“With Lawrence, when they sell you something, they will come out to the job site and they get right under the machines just like a mechanic. And that is 24 hours a day, seven days a week. What more could you ask?”

Back in the 1980s, Monte and Donna Atkins were each working for other people — he ran backhoes for a small construction outfit; she was the manager of a department store. In order to bring in more money for their young family, they decided to rent a Case backhoe and do some jobs on the side, such as putting in drain fields for residential septic systems.

“It got to where, eventually, I was making more money from the side jobs than I was from my permanent job,” Monte said. “At one time we were the largest septic tank installer in Augusta County. The company that we bought our septic tanks from had to put on another truck because we were putting in about six drain fields a week, which a lot of people said was impossible.”

The work Monte and Donna were doing was often back-breaking.

“We would put in twelve 100-ft. lines, have them inspected and cover them over,” he said. “I ran the equipment, she laid down the pipe and we were both shoveling gravel. Later, my son and daughter helped out when they weren't in school. We did that for probably 10 years.”

After a hurricane caused flooding in the area in 1995, Atkins was contracted by the Federal Emergency Management Agency (FEMA) and the Natural Resources Conservation Service (NRCS ) to help repair the streams and creeks that were damaged.

“The NRCS really liked our work and told us that they were looking for more husband-and-wife teams to do this type of work,” Monte said. “The NRCS showed us how to get bonded on these projects and because of that we got even bigger jobs.”

Monte's son, Monte Jr. (known by his nickname “Boogie”) had worked alongside his father on a few stream restoration projects for Trout Unlimited and the Virginia Department of Game and Inland Fisheries.

His skill as an excavator led him to other restoration projects and eventually he met a biologist named Larry Mohn. Together, they started Shenandoah Streamworks, a company that repairs and enhances natural waterways in several states.

“We work on a lot of native trout streams, many of them moving through farmland” Boogie Atkins said. “There is always a lot of erosion from cows getting in the water, so we design and install meanders, or turns, back into the streams. Doing that helps the water flow faster and stay cooled down.”

The younger Atkins' company, which works in several states, also utilizes Case equipment on projects as diverse as altering the flow of rivers or tearing down old dams.

His fleet has Case excavators, loaders, dump trucks and a rock hammer. That includes a 2008 model year Case 160 excavator and a 2015 Case 160 that he purchased just before the new year.

Monte and Donna Atkins no longer do the heavy work at their company — they have a crew of 10 to 15 people for that. Monte, though, is on site every day to oversee the work, while Donna does the estimating and handles the office work with their daughter, Chrissy Marcum. Her husband, Timmy Marcum, also works for the company.

“I often hear that parents and their children can't get along in business, but we have been doing this for 30 years and we get along just fine,” Monte said.

“We are really happy just to make a good living.”