To make room for the construction of a 14-acre Home Depot e-commerce distribution facility on the site a former Raytheon ordnance site split among the Massachusetts municipalities of Tewksbury, Lowell and Billerica, Atlantic Coast Dismantling LLC (ACD) successfully demolished a similar sized rectangular-shaped building on a 20-acre site between late June and Oct. 15.

Integrated Builders will be constructing the new multi-million-dollar building. 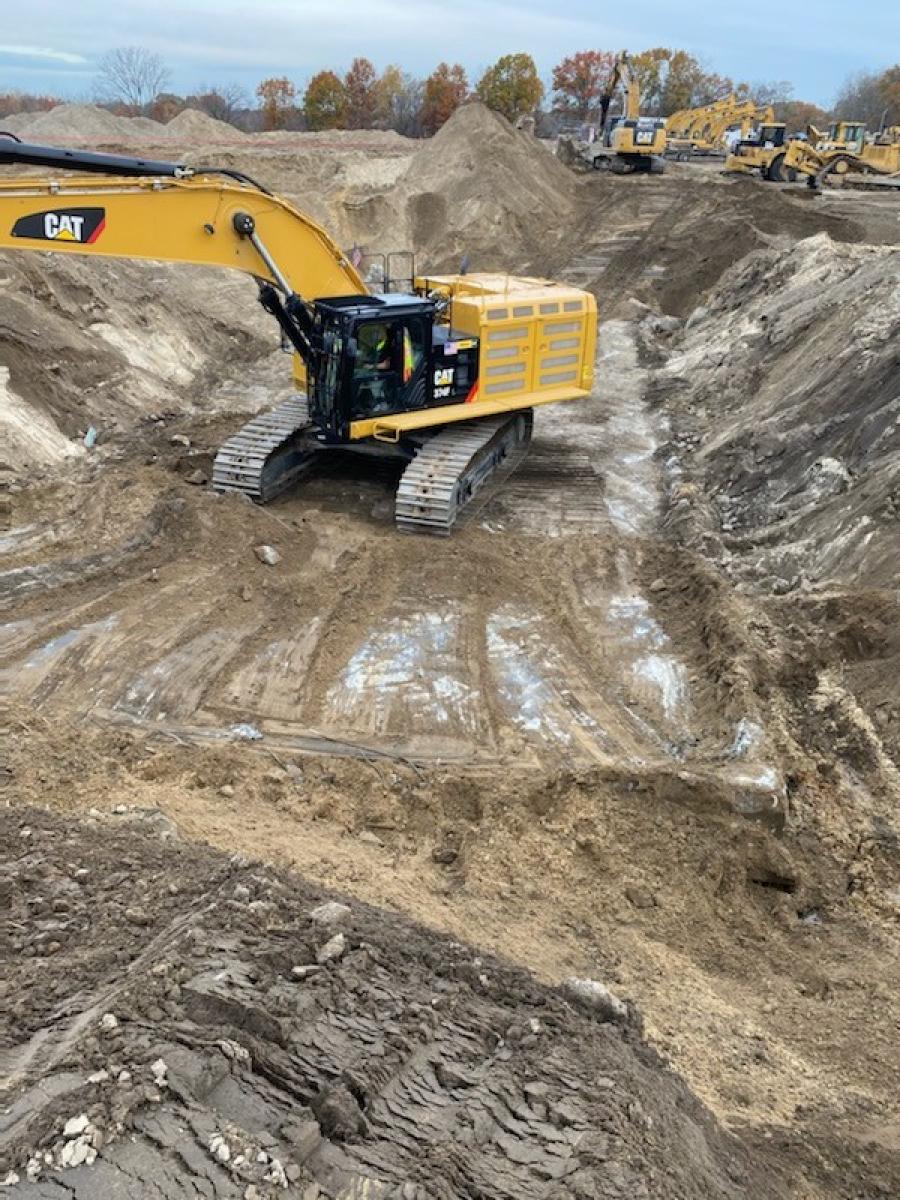 The former Raytheon plant started out as the Lowell Ordnance Plant, manufacturing .50 and .30 caliber machine gun ammo during World War II and later produced more sophisticated weapons systems as a Raytheon ordnance site. The facility had been recognized as being contaminated and was the subject of remediation efforts from the mid-1980s onwards. Since the Raytheon closure, it was part of an industrial park.

At its May 16 meeting, the Tewkesbury Planning Board approved a building permit for the Home Depot facility, a 775,000-sq.-ft. building at 495 Woburn Street that is split between Tewksbury and Billerica. Since that meeting, approvals for the construction have been granted.

The new single-story building is based on a design that Home Depot utilizes across the country.

The isolated demolition/future construction site is bounded by the Baker Commodities facility, commuter rail tracks, the Concord River and wetlands.

The demolition was far from easy as the plant, two stories in several sections, was expanded over the decades via different construction techniques and building materials.

"We encountered one type of construction, taking it down and then the building material would change," said Ted Wheeler, ACD's project manager. "This created new sets of challenges, and it kept going like that. We still have people on site taking care of punch list items that the general contractor wanted us to complete."

Due to previous contamination clean-up efforts, very little asbestos and lead had been encountered. The majority of the building materials consisted of concrete (walls, block and surfaces), steel and roofing material.

"Because a lot of people, including myself, travelled a great distance to get there, we wanted to get in a full day's work," said Wheeler.

The all-Cat equipment fleet consisted of four 374 and eight 349 excavators with LaBounty shears, Cat grapples, buckets, MTK hydraulic hammers and magnets, and two smaller 339 excavators with sheers used to prep steel for recycling; and two 983 loaders to carry materials to various stockpile and processing locations at the site.

"The 374s and 349s are huge machines," said Wheeler. "The crews have been using them for many years and they roll up the steel like rolling up a cigar and placing it into a large truck. We only had one noise complaint and we think it was related to railway activity."

The project also had a perfect safety record.

"We had no recordable OSHA accidents or incidents," said Wheeler. "Material and heavy equipment is really unforgiving. A typical day started with a pre-job briefing and safety speech, stressing watch out for your surroundings and look above and below for anything that might be a hazard. This was followed by equipment safety checks."

Environmental issues had to be addressed prior to and during the demolition. 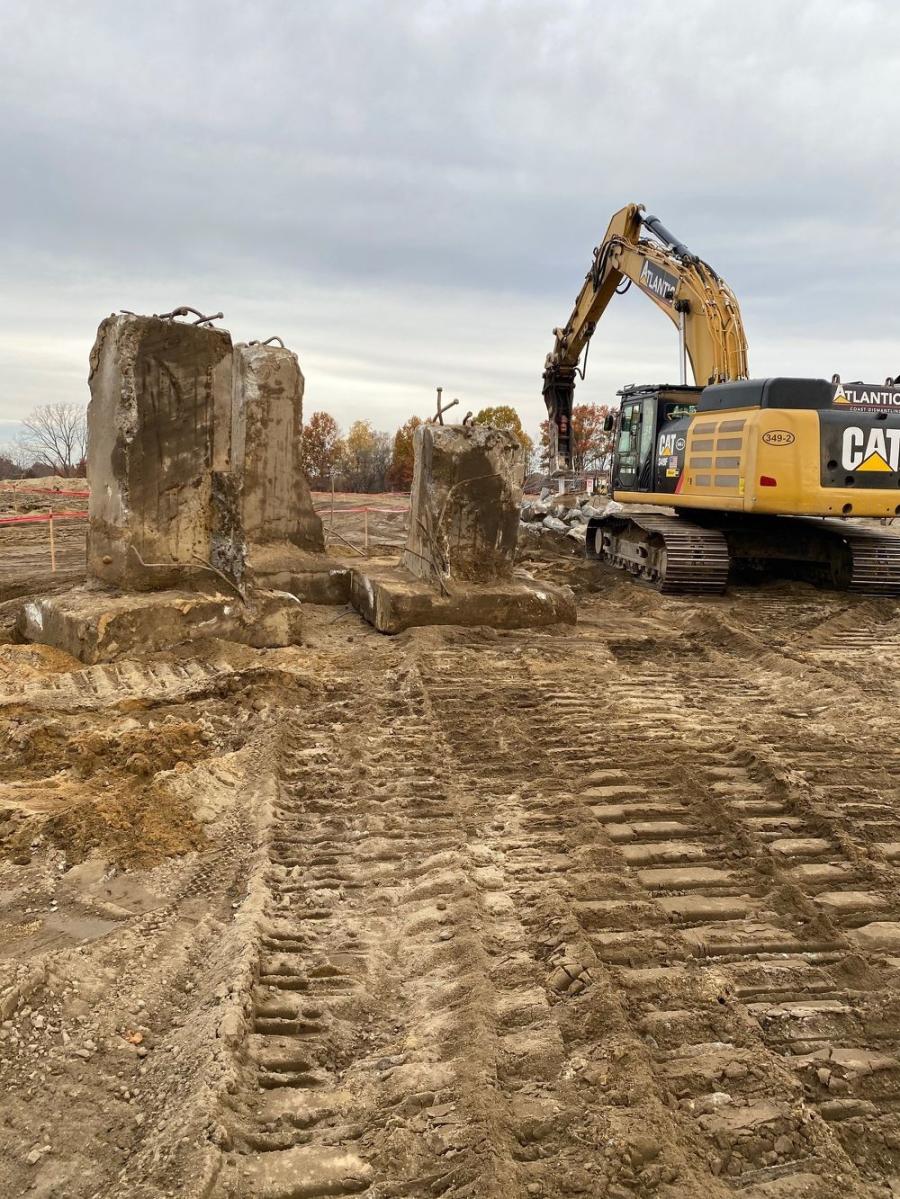 "The site is along the Concord River and it has a designation as wild and scenic, so it is an environmentally sensitive area," said Wheeler. "Tewksbury and Billerica each had their own conservation committee and similar items that they wanted addressed before we started. We were proactive and when we had to change an attachment, we made sure that we didn't spill a drop of oil or anything like that into the river."

"Each time you would take a bite out of the building, you would have to wet it to keep the dust down," said Wheeler. "We could not have any visible emissions. We had water lines — 1,500 feet long and we brought in fire hoses."

Utility-wise, the water and sewer lines originated in Tewksbury and the gas service and electrical from Billerica.

"Getting National Grid to disconnect the gas and electricity was a challenge," said Wheeler. "Another issue was Baker Commodities. They had back-up gas and electrical service from the property — it's kind of landlocked between the railroad tracks and the plant and there were very few right-of-ways where the utilities can come over. We could not interrupt their back-up service and it took about six weeks for National Grid to survey their service and get it all straightened out."

The utility map for the Raytheon plant was inaccurate.

"Being a defense contractor, I got the feeling that everything was secret — you couldn't find any drawings where the utilities came through and National Grid had to come in to conduct tests and make sure that everything was shut off from the street," said Wheeler. "I've never seen anything like it, and it was the same for the water,"

Once all the utilities were shut off, a demolition permit was issued.

One crew started at the northeast corner and the other at the southeast corner, with both crews eventually meeting up.

"The northeast side was really tough going, while the other side was way ahead," said Wheeler. "The northeast crew encountered larger pieces of steel and there were lots of concrete block partitions in the middle. It was a constant learning curve for them. It also had two elevators that had to be decommissioned. Dealing with the state elevator people was probably the greatest challenge — the most difficult. The serial numbers for the elevators didn't match up, but we sorted that out."

Despite the challenges, the work went smoothly for the structure that had been constructed on a slope. The crews went right down to the foundations and the slabs.

"As we went down the slope, more of the lower levels were exposed," said Wheeler. "Halfway through the project, while working the basement, there was a 600-foot long, 12-inch thick wall. It took us about a week to hammer it and pull it down."

In total, the demolition generated a large amount of steel, concrete and roofing material. Several locations were set up for the scrap metal, where larger pieces were sheared into 5-ft. and smaller sizes.

"Once enough steel was sheared, we called for a scrap truck to come in take it away," said Wheeler. "The concrete was saved as Leahy Excavating Co. Inc. is using it as fill for the new building. This was another challenge. Massachusetts has the BUD Law [Beneficial Use Determination] and it had to be tested to make sure it met specifications. It couldn't have any paint or other materials on it. It was constant testing and the owner hired a company to do the testing. Over 90 percent of the concrete was reusable."

The roofing material went out as construction debris. 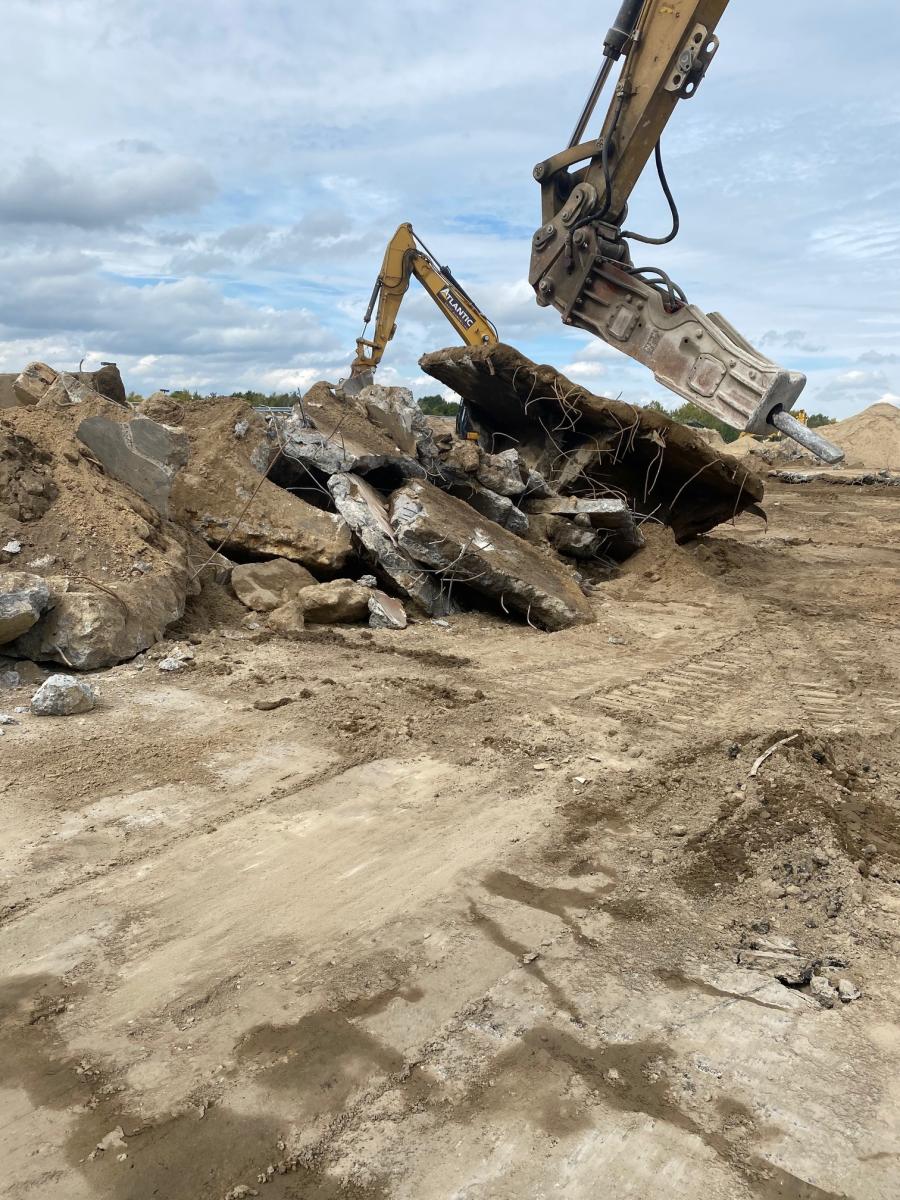 From the office side, ACD Regional Project Manager Barry Ketchke helped out and on site, General Foreman Chris Freni, who started the job before being transferred to another, helped set the tone and pace.

"Chris has years of experience in demolition and he helped me out a lot," said Wheeler. "The crews were outstanding. When I stood back and looked at the machines moving all at once, it was like watching a ballet — a well-choreographed operation. If one guy dropped a piece of debris, another would pick it up. It was amazing. All of them worked together one time or another."

Two subcontractors were brought in, with Leahy Excavating responsible for the concrete crushing and Schnitzer Steel covering the hauling of steel.

Mechanics, when needed, were sent to the job site.

"I and another guy did some minor repairs — hydraulic lines that blew up, battery issues and stuff like that," said Wheeler. "In a former life, I was a mechanic at a power plant and I taught a course on corrective, preventative and predictive maintenance and the difference between them. The shears demanded daily attention as the bolts that held the cutting edges in had to be tightened daily. The operators checked the bolts daily as part of their safety check. For the whole job, we didn't have any machinery failures — nothing was down, which was pretty remarkable.

"We were proactive in the mornings," he added. "We checked for anything that didn't seem exactly right. A couple of times, we found O rings about to fail and we would change them. It's always better to not have downtime. It was more preventative maintenance. Heavy Equipment Manager Anthony AJ Gigliello and his crew of mechanics put the machines through a vigorous preventative maintenance service back at the shop after the last job and they are ready for the demands of the next demolition job. When they are put into service, we watch them closely for any mechanical issues that could cause downtime."

ACD purchases its Cat machinery from Milton CAT, which has a dealership in nearby Reading.

"Some of the machines were still under warranty and if a machine wasn't acting right, they would come in and do some diagnostic work," said Wheeler, "but they really didn't have to do any major work."

This was the first project that Wheeler managed, having previously assisted with demolition of a tire burning power plant in Sterling, Conn., in March 2020.

"It was very gratifying to see an intact building end up as a sand pit," he said. CEG