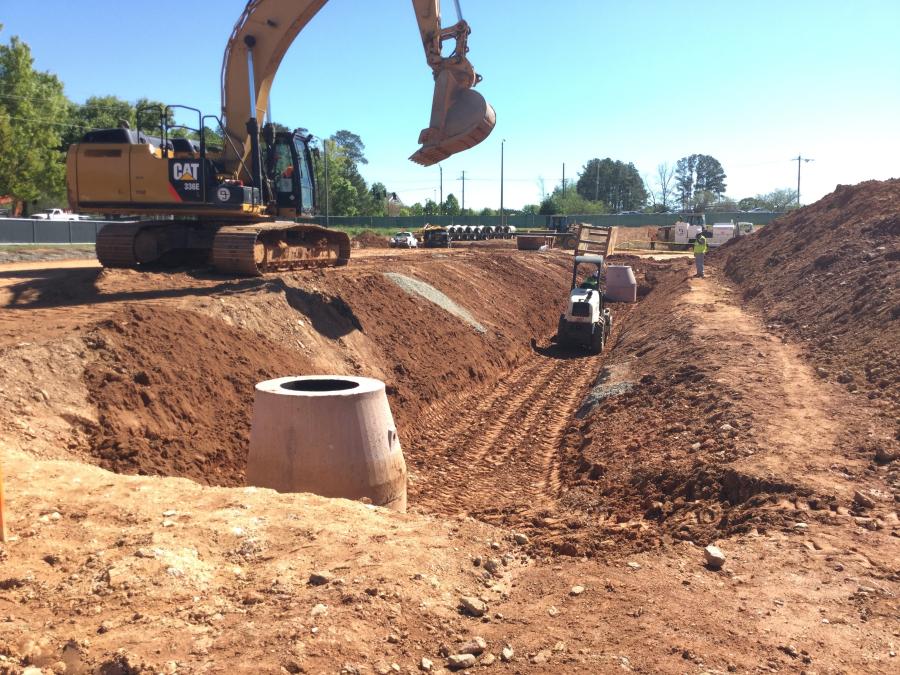 Officials at Auburn University are eagerly awaiting completion of a new Health Sciences Sector, which will feature a new nursing school and pharmaceutical research building. The $29 million, 89,000 square-foot nursing facility and the $17 million, 38,000 square-foot Harrison School of Pharmacy structure are strategically located at the corner of South Donahue Drive and Lem Morrison Drive in Auburn, Ala.

“The School of Nursing building offers state-of-the-art classrooms and lab spaces,” said Gregg Newschwander, dean of Auburn School of Nursing. “Often, when prospective students come to visit Auburn, they want first to see the simulation spaces. Ours are second to none. In a world where we are challenged to get students sufficient practice with patient management, skill performance and critical thinking and decision making, our simulation space will offer what we can't guarantee our students in the clinical setting, in an environment just as complex and challenging as the real world. It will definitely help us recruit the best and brightest to Auburn.”

University representatives and a number of leaders in health care broke ground on the new School of Nursing building in November 2015. Considered the gateway to the new Health Sciences Sector, the structure will provide spaces specifically designed to foster learning and research initiatives. For those who've been involved in the planning, the timing seemed right.

“The combination of an aging population and an aging workforce will create a significant nursing shortage in the next 10 years,” said Newschwander. “As schools try to address the impending shortage of nurses, a third variable, the shortage of nursing faculty, comes into play. With the support of the administration, the School of Nursing started increasing the size of our classes about seven years ago.

“We admitted 80 undergraduates per year in 2009, and now admit approximately 200 per year. That's a 250 percent increase. In the graduate program, we've gone from about 12 students to over 150 in those seven years, some of which is an effort to 'grow our own faculty' to meet the increasing demand. As a result, we have no classroom in Miller Hall that can accommodate any of our cohorts. So, our students are spread across campus, and we've lost our sense of community, which really has been frustrating for everyone. We've also grown the faculty, and have run out of office space in Miller Hall.”

By relocating to a building more than seven times larger than the current structure, the new School of Nursing will have plenty of room. With only 11,700 sq. ft. (1,086.9 sq m), Miller Hall has limited space for faculty offices, two simulation areas and a small auditorium. The new building will have a tiered auditorium, active learning classrooms, a student lounge, public spaces and more than three dozen faculty offices, as well as multiple small rooms for group meetings. Newschwander said the carefully considered location is an ideal fit.

“President Gogue has talked about a health sciences complex for as long as I've been here, and probably longer. Placing us in close proximity to the pharmacy research building, the medical clinic, the MRI facility and the Via College of Medicine encourages interprofessional collaboration, teaching and research.

“The classrooms are built for lectures, but also for small group work, so students are more fully engaged in the class. The active learning classroom allows student to learn with and from each other, building on their reading and out-of-class assignments. The skills lab and simulation suite are absolutely state-of-the-art. We can now 'create' just about any patient illness through the use of the mannequins. In doing so, we can assure all students get to see and care for patients that perhaps only a few would in the hospital setting.

Stacy Norman Architects of Auburn and Ayers Saint Gross of Baltimore, Md., provided architectural services for the School of Nursing. Newschwander and a faculty panel worked with the team to make certain the structure's design would solve the school's space concerns, while also addressing learning and research needs.

“I'm especially excited about the student spaces in the building. There is a large student commons area, for studying, socializing and just relaxing throughout our typically long days. There are a large number of small group study rooms with large screens that allow students to study together without crowding around one person's computer.”

Newschwander praised members of the Auburn administration and the community, who are helping fund construction of the project.

Lee Evans, Harrison School of Pharmacy dean, is also looking forward to the changes ahead.

“The campus has made significant strides in fostering collaborative research across multiple disciplines. The new facility will include resources that support the research mission of the campus. The new building expands our research footprint, since the research facilities in the Walker building will continue to operate.”

The three-story pharmaceutical research building will include pharmaceutical and interdisciplinary research labs and support space. The primary researchers who will occupy the building focus on oncology, cardiology and neurological disorders. Individuals who work on drug synthesis and drug delivery will remain in the Walker Building.

“Harrison School of Pharmacy takes possession in May,” said Evans. “New research space that facilitates the work of our faculty is very exciting. The faculty are already beginning to prepare for the move.”

The highly anticipated new building is funded by gift funds and budgeted dollars that have been accumulated for the project for the past ten years.

The Harrison School of Pharmacy offers the doctor of pharmacy degree, as well as graduate degrees in pharmaceutical sciences. The school has campuses both in Auburn and in Mobile, Ala. The Mobile campus is housed within the University of South Alabama Research Park, and is a collaborative venture with USA.

Founded in 1885, Auburn's pharmacy program is ranked among the top 20 percent of all pharmacy schools in the country, according to U.S. News & World Report. Evans said the number will likely rise moving forward.

“The new building should contribute to increasing the national ranking, since part of the formula that determines the ranking is research funding. The additional research space will improve our success in attracting outstanding researchers and extramural research funding.”

Evans, who will step down from his position in the coming months, will continue making contributions to the program he's been a part of for so long.

“This has never been a job, but a passion. My hope has always been to improve the delivery of health care through education.”

Hoar Program Management of Birmingham, Ala., was chosen to serve as construction manager for both construction projects. According to Jordan Tyner, PE, LEED AP, Hoar program management, overseeing two projects at the same time has required a bit of a juggling act.

“Both projects presented a unique individual challenge. However, it makes it more difficult to manage both projects, since there are different architects/engineers for each building that have different specifications and materials required. We are constantly checking each set of drawings and specifications for each building, to make sure that the owner is getting what has been specified.”

Tyner said the biggest obstacles for contractors during the construction process has been the limited space and busy schedule.

“With two buildings on the same site and most of the site at the start of the project being occupied by the first contractor installing the infrastructure portion of the project, this left very limited laydown space. The schedule is aggressive, yet achievable, and many seven-day work weeks have occurred to meet the end date.”

Currently, brick and precast is ongoing and drywall finishing and painting is occurring inside the nursing school building. Structural steel, roofing, building skin and the majority of interior mechanical and drywall has already taken place. Tyner said a great deal of communication with the university, contractor, designers and the end users has been required to construct classrooms, simulation labs, clinical and departmental space.

“Both buildings required a significant amount of fill to be brought in,” said Tyner. “When stripping the site of topsoil, it was discovered the conditions were quite different than what was expected. This site had previously been manipulated to ease access for tailgating. This resulted in fill being moved and placed on top of existing topsoil. The layer of soil and the original topsoil beneath had to be excavated and hauled off site.

“Also, both building pads were undercut and brought back up with filter fabric and stone to get above a perched water table during the time of construction. Other areas of the site were addressed with soil cement to stabilize the earth, and then fill was placed on top of the remediated soil.”

There were no utilities available to the site prior to construction. Tyner said extra steps had to be taken to resolve the issue.

“Hot and chilled water piping to heat and cool the buildings were brought from the university's energy plant approximately a half-mile away from the installation points. Also, natural gas was brought from this same area. We had to bring power and communications to the buildings via underground duct banks. Water was tapped from the main in a busy intersection and brought to the job site,” said Tyner.

An estimated 15,600 cu. yds. (11,927 cu m) of soil was moved in total for the combined projects. Among the primary pieces of equipment being used on the job are a scissor lift for installation of mechanical systems, lulls to provide materials in the buildings, boom lifts for window installation and a mast scaffold for the brick veneer.

A motorgrader for fine grading the road for pavement has also been used during construction, along with lifts to complete the building skin and punch out the exterior. Some of the main materials crews have been using include structural steel, concrete, metal studs, cast iron, copper, gypsum board, brick , precast, storefront and curtainwall glass, metal panels and shingles.

Tyner said the new pharmacy building has many mechanical systems to serve all the lab equipment, meaning that coordination drawings were critical to ensure everything would fit in the place the first time, since there was a limited amount available.

As far as constructing research labs and support space, Tyner said keeping all piping caped and clean is essential.

“When building places for sterile work environments, extra care has to be taken to make sure we are providing them with sterile buildings systems.”

With the new buildings scheduled to be finished by spring and summer of this year, Tyner, an Auburn graduate, said it's rewarding to play a major role in projects that will serve students and staff well into the future.

“My brother is a nurse and my dad is a pharmacist, and both went to school in Auburn. This project will help continue and grow both departments that will benefit many people in the future. I'm happy to have been part of a experience that will provide very rewarding and meaningful careers to the many students who will come through both buildings.”—CEG