As with most projects, the greatest challenges relate to schedule. 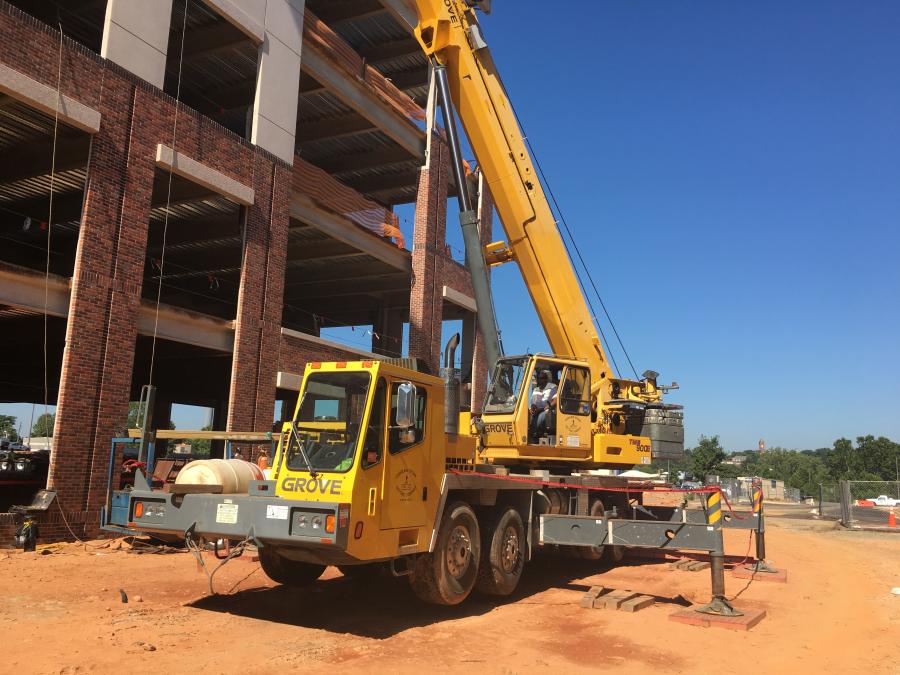 Brasfield & Gorrie photo With the installation of the highest steel beam now behind them, workers continue to move at a steady pace.

In Charlotte, N.C., crews have reached a crucial point in construction, as work continues on the new AvidXchange corporate headquarters building. The 200,000-sq. ft. (18,580 sq m) six-story office building, scheduled to open in 2017, is needed to accommodate the software company's rapidly expanding workforce.

“The topping out was successful,” said Tucker Craig, project manager of general contractor Brasfield & Gorrie. “It was a gratifying moment for our entire team to mark an important project milestone.”

With the installation of the highest steel beam now behind them, workers continue to move at a steady pace at the recently renamed AvidXchange Music Factory campus, which features bars, restaurants, music venues and office space. Brasfield & Gorrie has turned over the parking deck, with crews finishing precast skin erection on the office building, along with curtainwall and roofing activities. On the interior, metal stud framing and MEP rough-in, both overhead and in-wall, are under way.

“As with most projects, the greatest challenges relate to schedule,” said Craig. “Also, this Class-A office space will have high finishes and very intense build-out. We look forward to putting all the pieces together in an expeditious manner.”

Site demolition, clearing and grubbing, rough/mass grading were all performed to reach two building pads on different elevations. Underground site utilities were all installed, as well as temporary sediment basin and segmental walls. Workers also removed a small amount of mass rock from the site.

The six-story, 787-space parking deck and large underground storm water detention system have already been completed, according to Craig.

“Also, structural steel framing for the office building is finished, and all elevated concrete slabs have been placed. Spray fireproofing and roof screen wall have been completed, along with the setting of all mechanical units on each floor,” said Craig.

Significant tasks yet to be carried out involve dry-in and permanent power. The completion of all core wall framing will also be a milestone prior to work involving in-wall and hanging activities.

Equipment being used on the job includes two precast cranes onsite. One is a 90-ton (81.6 t) crane, the other is a 250-ton (226 t) model. Workers are using a 6,200-lb. (2,812 kg) buck hoist operating over six levels for material and personnel hoisting. There also are various boom lifts, lulls, forklifts and scissor lifts on site, for material transportation, caulking and glass setting.

With the exception of a few weather-related delays, Craig said crews have not experienced any setbacks, so far.

“We are constantly looking ahead to identify potential issues early. Also, as the scope is being completed, we are focusing on quality control to help identify possible installation issues,” said Craig.

Being mindful of the environment also is important to the team.

“For us, sustainability is an important aspect of construction. Energy efficiency and decreased waste are among the sustainable efforts being implemented on this project,” said Craig. “Safety is our top priority, now and through completion.”

Serving more than 5,500 clients throughout North America, AvidXchange specializes in automating invoice and payment processes for mid-market companies in industries that include real estate, financial services, energy and construction. Recognized as one of the 50 fastest-growing private companies in the Charlotte area for the past several years, AvidXchange is investing $20 million in the expansion project, having purchased the naming rights to the Music Factory entertainment complex earlier this year.

“Our company is growing exponentially, and we wanted to find a location here in Charlotte that would accommodate a new corporate campus to house our employee base, now, and in the future,” said Michael Praeger, CEO and co-founder of AvidXchange. “We've been steadily growing at a revenue growth rate of 60 percent, year over year, and just crossed over the 6,000 mark for customers.

“One of the hallmarks of our company is providing a very high level of service to support our software experience, and this means adding the right kind of talent in proportion to our customer growth. As AvidXchange does everything in-house, it's very important that we have an environment where all of our functional areas can collaborate in real-time on projects.”

Praeger said that AvidXchange is at a major inflection point.

“In 2011 we had fewer than 80 employees, and this August we crossed the 800 mark. And this growth will not be slowing down anytime soon. With the state awarding us an incentive for job creation in September of 2014, we felt more supported than ever by North Carolina, and knew that we wanted to put down our roots in the great city of Charlotte, which we've called home since day one.”

Praeger said the challenge was finding a location that could accommodate the size campus the company wanted to build.

“When we found out there was space available at the Music Factory location, we were thrilled. Rick and Noah Lazes have done a phenomenal job over the years of revitalizing the community, and we are so excited to contribute to the positive change they've made.

“I see the tides changing in Charlotte, with tech companies rising in popularity and trying to replicate the Silicon Valley fun and edgy experience here. My hope is that the AvidXchange Music Factory will serve as a catalyst for creating the 'Silicon of the South' in North Carolina.”

A second building also is in the works.

“We plan to get started on it as soon as we finish the first one, to accommodate our growing employee base,” said Praeger.

Rick Lazes, co-founder of the ARK Group said,“By moving its headquarters and building its new corporate campus at the Music Factory, AvidXchange has already made a huge commitment to this complex, and to providing an influx of people to support the surrounding businesses. The core values that Michael has cultivated at AvidXchange perfectly parallel with the spirit and purpose of the Music Factory.”

Red Rock Developments serves as the office developer working with Ark Ventures on the AvidXchange building. Based in Columbia, S.C., with offices in the Queen City, Red Rock Developments focuses on single-tenant, net lease, build-to-suit developments in the office, industrial and retail sectors. LS3P Associates was chosen as the project architect.

Nathan Daniel, LS3P Associates, principal architect, said the firm's vision was to create a dynamic office headquarters that captured the brand of the client, while integrating itself into the seasoned Music Factory community.

Daniel said one of the biggest challenges is to create great architecture that exceeds expectations within their budget.

“This site presented many obstacles to the design team with rezoning, multiple parcels, multiple owners and limited utility capacity.  From design release to construction, the aggressive turn over schedule required close careful phasing, close coordination with the client and contractor and continuous problem-solving to achieve scheduling milestones.”

Daniel described the building as modern, with clean lines and materials that adapt well within the Music Factory community.  Precast, brick masonry, metal, aluminum storefront/curtainwall and Low-e glass are the primary exterior materials.

“The AvidXchange headquarters implements many sustainable strategies through its storm water management, HVAC systems and materials. We wanted to create a dynamic office headquarters that captured the brand of the client, while integrating itself into the seasoned Music Factory community.”

Brock said storm water management proved to be the most critical endeavor.

“The site presented the challenge of a topographic ridgeline through the middle of the site, thus creating two drainage areas. This meant that future development would have to accommodate additional underground detention facilities. Bloc Design worked with the city of Charlotte engineering department in a coordinated effort to consolidate the storm water system into one underground facility for phase one and two,” said Brock.

“In addition, we mitigated the frequent flooding to the adjacent public street, and worked with the city of Charlotte to develop a plan to arrive at a creative solution saving the client nearly $200,000 in site costs. Understanding these cost implications early in the process was critical to the developer's financial proforma.”

Brock said the firm thoughtfully crafted an aesthetic within the means of the budget provided.

“The future phase includes a multifamily block, as well as a hotel block, and those working in the office development can enjoy both entertainment venues, restaurants and small retail across the street at the Avid Xchange Music Factory,” said Brock.

“In addition, this development is an extension of the Music Factory's effort to revitalize this section of Charlotte, serving as a catalyst for this development, as well as future development that is currently under way. This new growth provides job opportunities to adjacent neighborhoods comprised of mixed incomes.

“A lot of effort and energy went in behind the scenes to make this project come to fruition and be as successful as we all know it will be. We look forward to seeing the facility in use, and finishing out the rest of the phases in the development,” said Brock.