Crews from the contractor Seattle Tunnel Partners have been working around the clock, disassembling the machine to make room for the roadway coming up through the tunnel behind it. 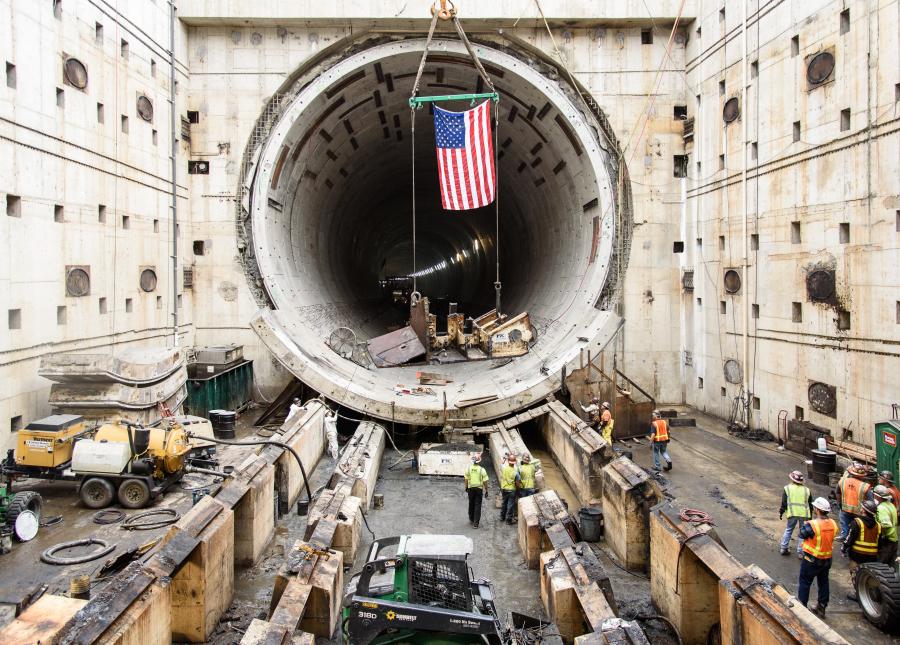 In tribute to Seattle’s tunneling machine Bertha, the American flag flies above the last piece of the machine as it is lifted out of the disassembly pit near Seattle Center.

Disassembly of the world's largest tunneling machine is now complete. On Aug. 23 crews lifted the final pieces of the 8,000-ton giant out of the SR 99 tunnel's disassembly pit near Seattle Center. The lift ended more than four months of difficult work.

Bertha broke through into the disassembly pit on April 4, 2017, and shortly thereafter built the tunnel's final ring. Though the machine's tunneling and ring-building work was complete, crews couldn't complete roadway construction at the north portal until it was removed. Crews from the contractor Seattle Tunnel Partners have been working around the clock, disassembling the machine to make room for the roadway coming up through the tunnel behind it.

It was tricky, tough, and impressive work, re-positioning the machine and dismantling its 8,000 tons of steel into pieces small enough to lift by crane or pull back out of the south end of the tunnel. The largest lift (or “pick” as crews call it) was 70 tons. Larger pieces required additional cutting on the surface before hauling.

Hitachi Zosen, the machine's manufacturer, will decide what to do with many of Bertha's components. However, her signature 57.5-ft. steel cutterhead was unique to this project and was cut up and trucked to a local steel recycler. Hitachi Zosen donated pieces of the cutterhead to the Port of Seattle and donated cutting tools and the control panel to Seattle's Museum of History and Industry.

Even while Bertha was still tunneling, crews were building the roadway inside the tunnel and working on electrical and other systems. With the machine completely gone, that work can continue uninterrupted along the 9,270-ft. tunnel Bertha dug beneath Seattle.

WSDOT's focus is on finishing the tunnel for an estimated early 2019 opening, along with preparing for the Alaskan Way Viaduct's demolition, the decommissioning of the Battery Street Tunnel, and improving surface street connections at the tunnel's north and south ends.

With disassembly complete, WSDOT is retiring the “Follow Bertha” webpage and updating the program Twitter account, but will keep the same Twitter handle, @BerthaDigsSR99, because although the machine is gone, the product of her labors remains.