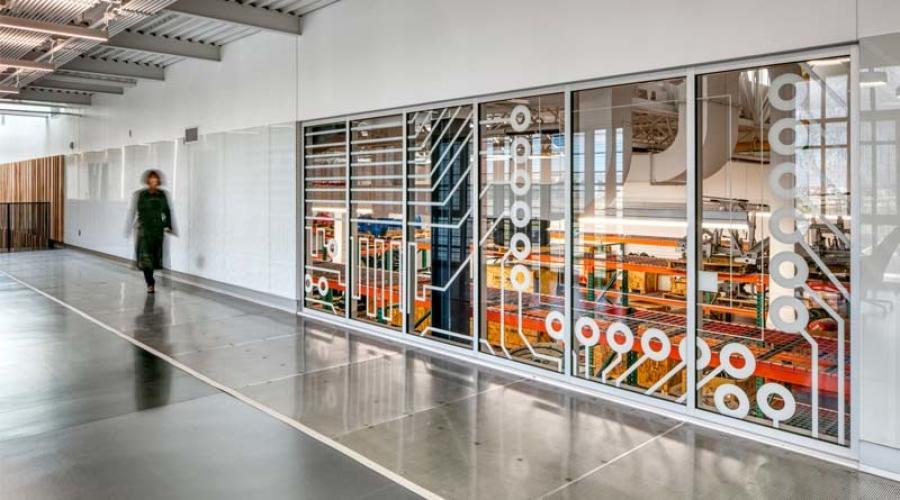 Crews from Big D Construction and ajc architects recently completed a new technical education facility that is now open as part of Salt Lake Community College. The new Westpointe Workforce Training & Education Center (WWTEC) will train students for business and industrial careers. The WWTEC, which aims to address a technical skills deficit in Utah's STEM fields, is located in the industrial Northwest Quadrant, an area of the capital city that has been heretofore underserved in the area of higher education.

SRG's partners on the $43 million project — of which $33 million went to construction alone — included architect of record ajc architects and general contractor Big-D Construction, both of which are located in Salt Lake City.

Under one roof, the WWTEC will feature classrooms for instruction in specialized technical areas such as welding, plastics, diesel technology and CDL truck driving instruction.

SRG Partnership, which is based in Portland and Seattle, designed the 121,000-sq.-ft. building as a "flexible" modern space for education. Learning features include laboratories and "shop spaces" that are meant to mimic real-world work environments that students might one day encounter in the field.

SRG said that replicating real-world environments at the school will also give some of the students a leg up when it comes to applying for jobs in their fields, according to a statement.

"With 46 percent of SLCC's students taking career and technical education courses, the Westpointe Workforce Education and Training Center is making a huge impact to close the gap for the need of skilled workers for Utah's economic development and ensure long-term vitality of the community," the statement noted.

The building's interiors feature high ceilings, a marriage between indoor and outdoor space and ample natural daylight for interior spaces. Furthermore, social areas have been specifically set aside to promote interactions between students and between students and staff. A solar roof also aims to neutralize the building's carbon footprint entirely.

SRG said that the site of the WWTEC has a fault line running through it, as well as a below-ground high-pressure gas line — both of which had to be considered as the construction went along.

"This limited the area of building footprint available and led to the elongated form" of the building, the statement said. "The magnitude of its scale and volume at over 600 [feet] long was a challenge. The design team was sensitive to addressing the human scale by breaking up the mass through form and materials."

Furthermore, the designer ensured that learning spaces themselves would face away from busy I-215 nearby.

"This allowed for the academic areas and entrances to be [at] pedestrian scale while the machine and industrial scale of the building was parallel to the freeway," the statement said.

"The building placement also provided an opportunity for SLCC branding and advertising on the east facade facing the freeway to help draw attention and interest."