Project Neon isn’t flashy at all, but it is Nevada’s largest and most expensive public works project ever undertaken during the state’s 152-year history. 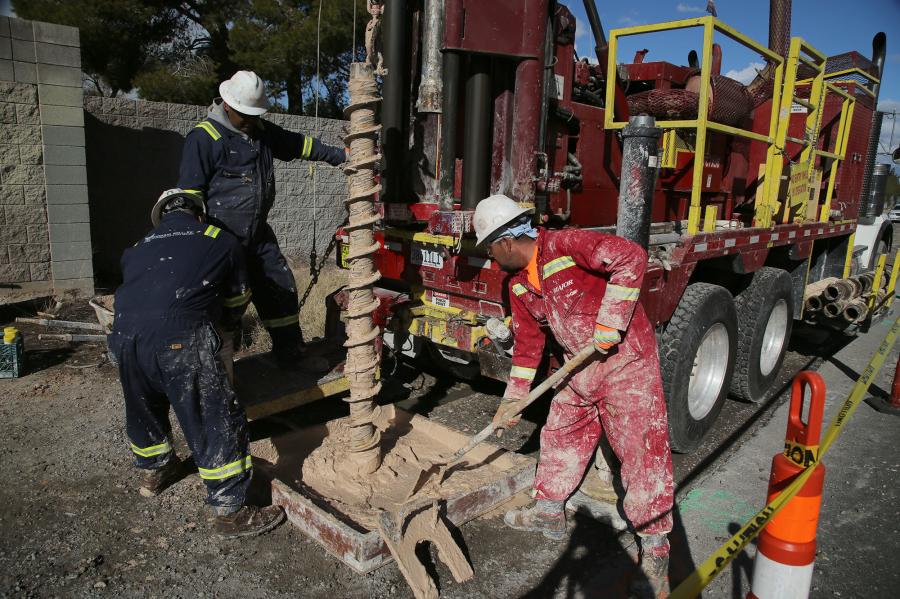 Project Neon is Nevada’s largest and most expensive public works project ever undertaken during the state’s 152-year history.

Its catchy name might conjure flashy lights, glitter and glitz, as befits a project in Las Vegas. In fact, Project Neon isn't flashy at all, but at a nearly $1 billion investment, it is Nevada's largest and most expensive public works project ever undertaken during the state's 152-year history.

“Project Neon will widen 3.7 miles of Interstate 15 between Sahara Avenue and the 'Spaghetti Bowl' interchange in downtown Las Vegas,” said Tony Illia, public information officer of the Nevada Department of Transportation. “It's currently the busiest stretch of highway in Nevada with 300,000 vehicles daily, or one-tenth of the state population, seeing 25,000 lane changes per hour. Traffic through the corridor is expected to double by 2035.”

The project began in April and is set to be complete in 2019, creating 4,000 high-paying local jobs in its course. It is being funded through the state's bonding process, but will be reimbursed by the federal government in future years.

Kiewit Infrastructure West Co. is the design-build general contractor under a $559.4 million contract, which carries up to $20 million in early completion incentives plus millions in potential late penalties. Atkins North America Inc. is the project's lead designer.

Those incentives are key to keeping traffic flowing as much as possible while the work is being done, said Dale Keller, senior project manager of NDOT.

“That's one thing we spent a lot of time on, to understand limitations of construction and really focus the contractor on minimizing impacts through incentives and disincentives. There are incentives to get out of corridors that are highly traveled. On I-15, there is a $5 million incentive associated with contractor finishing on time. During March through November, they are allowed to limit traffic for one construction season. We also set the time frame around special events, making sure we are avoiding impacts to those major events. It's the same for U.S. 95. There are great incentives for the contractor to get the work done. It's the heart of Las Vegas and we understand accessibility is essential. If we're impacting one east-west local street, then the adjacent street will be functional.”

The centerpiece of Project Neon is an 81-ft. (24.7 m)-tall, 2,606-ft. (794 m)-long High Occupancy Vehicle (HOV) precast concrete tub girder flyover bridge from southbound U.S. 95 to southbound I-15 that also accommodates carpool traffic from northbound I-15 to U.S. 95 northbound, said Illia. The project additionally converts the two existing I-15 express lanes into a general purpose and HOV lanes, thereby creating 22 consecutive mi. (35 km) of carpool lanes between I-15 and U.S. 95. The HOV lanes will allow carpoolers and rapid transit downtown Las Vegas access with the Neon Gateway interchange between Charleston Boulevard and Oakey Avenue.

In addition, the project will create a full diamond interchange at Charleston Boulevard for easier access to downtown, the Medical District and Symphony Park, and several “ramp braids” will reduce merge and weave traffic on Interstate 15. Meanwhile, Martin Luther King Boulevard will become a feeder-like roadway paralleling the I-15 for improved performance and accessibility.

Other planned upgrades include extending Grand Central Parkway over the Union Pacific Railroad tracks as well as connecting to Industrial Road for improved resort corridor access and mobility. There also will be aesthetic and landscape upgrades, improved drainage, and 50 Active Traffic Management (ATM) signs, with the largest ones measuring 12.5-ft. (3.7 m)-tall by 77-ft. (23 m)-wide.

In addition to the cash incentives, the contractor also is helping to speed work along by using precast segments, Keller said.

“We are very focused on the impact to the community. A lot of segments are precast — precast walls, precast I girders for the bridges, precast deck. It's all focused on speed and schedule and getting out of the corridors, and for the equipment to get in and get out. We also have a big regional flood control box that is being constructed. There are dual boxes that run adjacent to the freeway. It doesn't rain a lot but when it does it comes down fast and quick and flows to center of valley. The boxes help with flood control.”

“Project Neon, upon completion in summer 2019, will reduce travel delays by 28 percent for a $110 million annual savings through increased productivity,” said Illia. “It will also improve air quality due to less idle time and vehicle exhaust while enhancing motorist safety from reduced merge and weave traffic.”