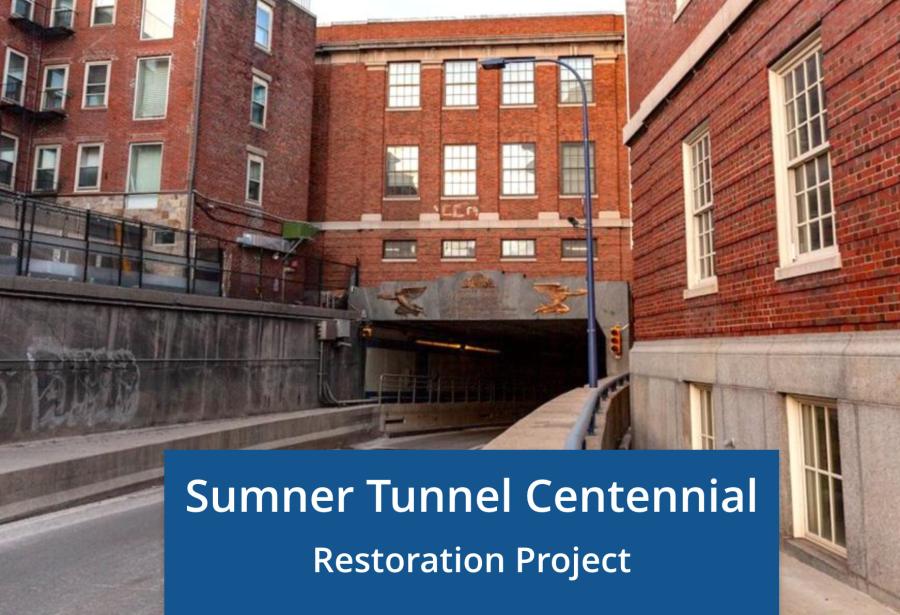 After nearly a century of service, the Sumner Tunnel running beneath Boston Harbor, a heavily traveled route linking East Boston and Logan International Airport to the rest of the city, is about to undergo an extensive restoration.

Beginning June 10, the Massachusetts Department of Transportation (MassDOT) will commence repairs and closures of the 88-year-old tunnel, that will not only affect Boston motorists, but residents and businesses in the North End, East Boston and South Boston, state officials said.

According to the Sumner Tunnel Project's page at MassDOT.com, the almost 2-mi.-long roadway passage is to be shuttered on most weekends throughout the rest of 2022, until it is shut down completely for four months in 2023 to perform a "top-to-bottom restoration."

The effort to modernize the dilapidated gateway to downtown Boston will mean removing and replacing the tunnel's ceiling and arch support, reconstructing the tunnel deck, replacing the roadway surface, repairing walls and installing fireproof panels. Plans also call for the Sumner Tunnel to have new LED lights, a new fire alarm system and closed-circuit cameras.

"After a thorough review of construction plans and impact reports … the best way to move forward is a four-month shutdown in 2023, with weekend closures before and after the full shutdown to complete the project," described MassDOT on the project's web page. "This is a fast schedule that involves project-acceleration techniques and economic incentives to keep things on track."

Starting the weekend of June 10, the Sumner will close from 10 p.m. on Friday to 5 a.m. on Monday for 36 weeks, excluding holidays, according to the MassDOT Sumner Tunnel website.

The full shutdown is slated for May 2023, when the tunnel will be closed seven days a week through September. Following that, weekend closures will return and continue intermittently until February 2024, the transportation department explained.

Still, the agency admitted, the repairs and closures will bring more traffic to East Boston and South Boston and will cause "unpleasant noise and vibrations" in the North End. MassDOT officials told the Globe, though, that noise and vibration will be monitored and "noise suppression devices, enclosures and barriers" will be used as needed. In addition, the construction team will use wetting agents and secure covers on trucks to keep dust under control.

MassDOT predicts East Boston residents also will see "more traffic, noise and pollution," and the number of vehicles will undoubtedly increase in South Boston and along the waterfront as drivers detour through the Ted Williams Tunnel.

The state agency added that shutting off the public from using the Sumner Tunnel "is not a decision we're making lightly. We know the project will impact commuters, travelers and surrounding neighborhoods in different ways. We are committed to finding ways to lower these effects and reduce impact across the board."

Detour routes will be clearly marked, and informational signs will be posted at intersections in East Boston to make people aware of the restoration project and when the tunnel will be closed, MassDOT said.

When it opened in 1934, the Sumner Tunnel was the only tunnel that ran under the harbor, and it carried traffic in both directions. It was the first traffic tunnel in Massachusetts, and it is still one of the oldest in the country, according to MassDOT.

East Boston resident Andrew Pike, a board member of the Jeffries Point Neighborhood Association, said people in his neighborhood are worried about what lies ahead when the tunnel is closed.

"Everybody's absolutely dreading it," Pike told the Globe in a phone interview. "It's going to have a major impact on people trying to get downtown."

When the Sumner Tunnel toll booths were removed in 2017, he added, there was a "dramatic amount of traffic" as drivers were detoured through the Ted Williams Tunnel. He said he "can only imagine" what it will be like when the Sumner is shut down for several months.

"The weekend closures [are] one thing. When it's closed completely for months at a time... I think it's going to have [a] significant impact on the level of traffic trying to go through the Ted Williams Tunnel," Pike commented, adding that there also are concerns about the impact on emergency services.

"There's no real hospital on this side of the tunnel," he explained, and the work will increase travel times to other Boston hospitals.

In contrast, another East Boston resident, Neelesh Batra, who serves on the board of the Gove Street Citizens Association, said he understands why the work needs to be done on the Sumner Tunnel.

"I'm OK with it. I know our infrastructure is old," he said. "I'm not exactly sure how they would go about the repairs they are trying to do without shutting it down like this. The full closure is going to be a headache. But it sounds reasonable, and we will get through it."

More information about the Sumner Tunnel restoration work and maps of the detour routes can be found on the project's website at www.mass.gov/sumner-tunnel-restoration-project.