Now that crews have gotten under the pavement, New Orleans officials think it's probably going to cost more. 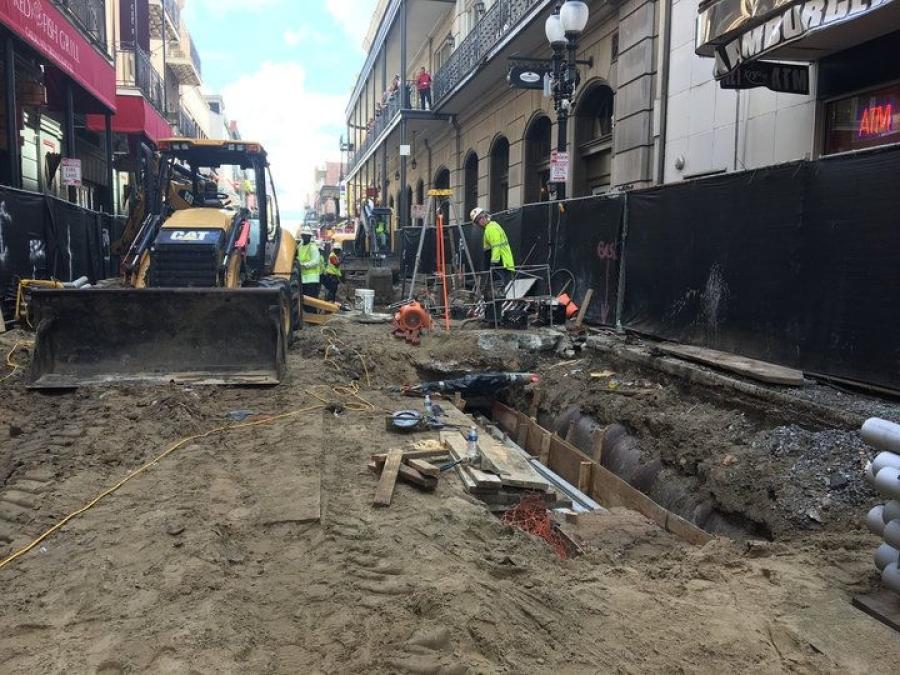 On April 24, construction crews began hammering away at the first block of Bourbon Street at Canal Street, disemboweling the ground to drop in new utility lines for the first time since 1928.

The construction work already underway on three blocks and planned along an additional five blocks of Bourbon Street was supposed to cost about $6 million, according to original estimates. Now that crews have gotten under the pavement, New Orleans officials think it's probably going to cost more -- though exactly how much more remains to be seen.

On April 24, construction crews began hammering away at the first block of Bourbon Street at Canal Street, disemboweling the ground to drop in new utility lines for the first time since 1928. Almost immediately, officials say crews encountered old sewerage and drainage pipes and electrical lines that they had not expected would be there, leaving work on the 100 block of Bourbon unfinished in mid-July despite a projected June 29 completion date. Rainy weather also put a damper on the work schedule, pushing the revised completion date to Aug. 5.

Col. Mark Jernigan, director of the city's Department of Public Works, said Wednesday (July 12) he still expects crews to meet an end-of-the-year deadline to complete an overhaul of the first eight blocks of Bourbon Street. What he's less certain of, however, is how much the project will ultimately cost.

"We'll probably be a little bit over the $6 million, which is also not completely unexpected given the nature of the work, what we've got to deal with on Bourbon Street," Jernigan said.

The city has effectively jettisoned the original $6 million cost outlined in its contract with Hard Rock Construction, Jernigan said. Now, Hard Rock and Public Works are negotiating scope-of-work and cost-estimate agreements block by block, rather than agreeing to a set price for the overall project.

For each section of Bourbon Street, the city and Hard Rock will submit their own cost estimates, which an independent engineer will review before Public Works signs off and issues a "notice to proceed," Jernigan said. That notice will contain a line-item breakdown of equipment costs and an overall price tag tailored specifically to the particular block.

No notice to proceed letters have been issued yet, despite the fact that work is currently underway on three blocks, Jernigan said. That means there are no official cost estimates to date for the Bourbon Street reconstruction project.

"We're really kind of working through those estimates," Jernigan said.

The work is expected to last through December.

The public works director acknowledged Wednesday that it's an unusual way to go about performing roadwork. Usually, a notice to proceed is issued before groundbreaking, he said.

"On this particular project, we gave the contractor a preliminary 'go' based on the preliminary cost estimate that we originally did," he said.

Hard Rock is also operating under a "standard maintenance contract," rather than a typical capital improvement contract, to give the city more flexibility, Jernigan said.

The city's initial plans to pay for the $6 million project included the Sewerage and Water Board covering $2 million in equipment and installation costs and $4 million coming from city-issued general obligation bonds, Jernigan said. The $4 million was part of Mayor Mitch Landrieu's citywide security plan that in large part focuses on beefing up security in the French Quarter with surveillance cameras, bollards and beautification.

Jernigan said any additional costs for the Bourbon Street project will also come from bond proceeds.

Historically, he said, capital projects see cost increases of around 10 percent of the original estimate. Whether that increase holds true for Bourbon Street remains to be seen.

"For this particular case, because we're going block by block, I couldn't give you a good picture of that just because it's early in the process," Jernigan said. "This is like doing eight mini-projects stacked together to make up one project."

ernigan said he expects a notice to proceed to be issued for the 100 block before work wraps up Aug. 5. He also expects notices to go out for the other blocks before each one is completed.

The reason for doing it this way, Jernigan said, is to finish the project as quickly as possible. That's because the work is happening in one of the city's most frequented places, Jernigan said, and because installing the bollards on Bourbon Street can't be done until the reconstruction finishes.

Landrieu's safety plan calls for 20 bollard installations at intersections along the reconstructed eight-block stretch of Bourbon to prevent potential terrorist attacks from vehicles, as happened in Nice, France, last July.

"I think the context of this project is a lot different than a typical project," Jernigan said. "This is almost an emergency situation, from a public safety perspective, to get this work done and get all the components of the citywide public safety plan in place so that we can reduce the risk from something bad happening."