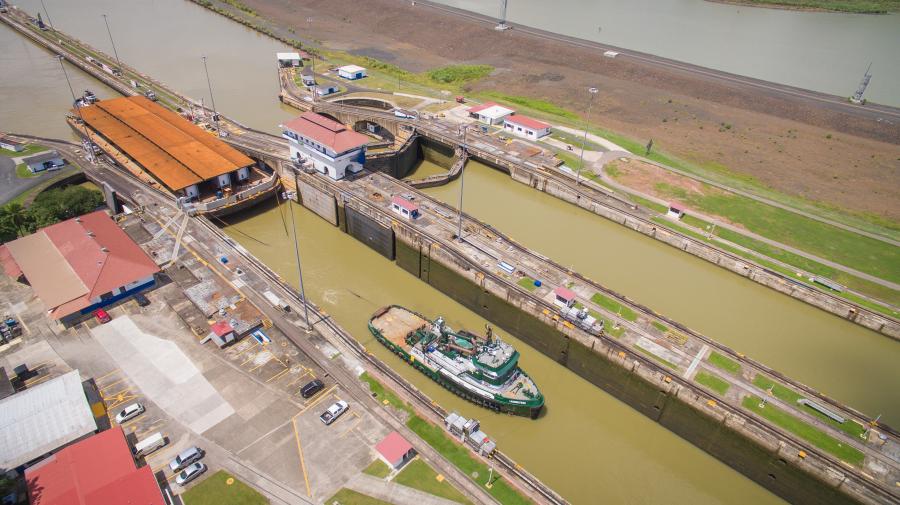 In dramatic fashion, an orthotropic deck shipped from Washington State via the Panama Canal has reached its final destination in New Jersey.

In dramatic fashion, an orthotropic deck shipped from Washington State via the Panama Canal has reached its final destination in New Jersey. The mid-July arrival marks a milestone for crews working on the Route 7 Wittpenn Bridge project, located within Jersey City and Kearny in Hudson County.

“This complex project requires extensive coordination and communication among internal and external stakeholders in order to ensure the right work is happening at the right time in the right place, to allow it to advance on schedule,” said Mahesh Patel, New Jersey Department of Transportation (NJDOT) project manager. “It involves extensive environmental, right-of-way, geotechnical, structure and utility work.”

Named for H. Otto Wittpenn, a former mayor of Jersey City, Wittpenn Bridge carries Route 7 traffic over the Hackensack River and serves as a major connector between Routes 139 and 1&9 Truck to the east, and the New Jersey Turnpike Interchange 15W and Newark/Jersey City Turnpike to the west. The work consists of the replacement of the Route 7 Wittpenn Bridge over the river and the realignment of Fish House Road on the west side of the water. The new bridge will be located north of the existing bridge.

“The existing Wittpenn Bridge is a vertical lift bridge that was built in 1930, and is 2,169 feet long, with 14 deck-girder spans and three through-truss approach spans, two tower spans and a 209-foot vertical lift main span,” said Patel. “The bridge currently provides four 10-foot travel lanes, two eastbound and westbound, with no shoulders. There is no physical separation between opposing traffic on the bridge.”

Bridge construction actually commenced in 1927, and it was opened to vehicular traffic on Nov. 5, 1930. The bridge has an annual average daily traffic of nearly 50,000 vehicles, including about 2,000 trucks.

“The new vertical lift structure will carry two 12-foot through lanes, a 12 foot auxiliary lane and an 8-to 10-foot right shoulder in each direction, as well as a 6-foot sidewalk along the eastbound roadway. An 8-foot median consisting of variable width inside shoulders and a median barrier will separate opposing traffic flows.

The new structure will accommodate pedestrian and bicycle traffic. Also, the new vertical lift bridge will provide for a minimum vertical clearance of 70-feet above Mean High Water EL 2.19, in the closed position, as compared to 35-feet for the existing lift bridge. This means there will be less need to open the bridge, so there will be fewer interruptions to traffic.”

NJDOT created a website to track the shipping progress of the orthotropic deck on its long journey, which began the first week of June. The barge entered the first lock of the Panama Canal from the Pacific Ocean at the end of the month, beginning a roughly 16-hour trip through the canal and its six locks before reaching the Caribbean Sea, and then traveling north up the Atlantic Coast. The final leg of the trip involved travel through the Hackensack River.

The deck, which arrived in New Jersey on July 14, is making headlines, as it's the first time this innovative structure is being used in the state. Manufactured by Vigor LLC at its facilities in Clackamas, Ore., and Vancouver, Wash., the deck is a lightweight design with a thin steel plate and a series of ribs and floor beams. It was developed in Germany, and is similar to U.S. battleship decks, as well as some types of corrugated cardboard.

Having a lightweight deck allows the bridge to operate more efficiently, and reduces the amount of future maintenance. The deck also allows for longer span length, providing a smoother driving surface. Prefabricating the deck results in faster construction and higher quality control.

Although the design has been used for thousands of bridges across the globe, it's considered relatively new in the United States Domestic structures featuring an orthotropic deck include the Golden Gate Bridge in California and the Verrazano-Narrows Upper Deck in New York.

“Both projects used an orthotropic deck to replace the original deck,” said Patel. “The new decks on Tacoma Narrows Bridge in Washington and the Alfred Zampa Memorial Bridge in California are using this design, and many movable bridges in Alaska have been constructed with orthotropic decks.”

The replacement of the existing bridge was designed to address the major goals of the project, including eliminating the structurally deficient bridge, meeting current design criteria and improving traffic operation and safety, improving traffic service for the region, increasing vertical clearance over the Hackensack River in the closed position to reduce vehicular and marine traffic conflicts and cutting maintenance costs and traffic disruptions.

Planning for the project actually began in 2001. Various options were studied, and a preferred alternative was determined during planning. The project was broken into multiple contracts with each contract focusing on a specialty item.

“This allows experienced contractors with expertise in that particular type of work to bid on the job and focus on a specific portion of the project,” said Patel. “This ultimately provides a better overall product. In addition, it allowed the project to be conducted in phases and work to begin on portions of the project that were ready to go, rather than having to wait for all the pre-construction work for the entire project to be completed.”

Contract 1, which was awarded to Conti Enterprise, began in November 2011 and was completed in December 2014. Agate Construction Co. Inc. received the second contract, which wrapped up in January 2016. CCA Civil won Contract 3, while Union Paving & Construction was granted Contract 3A, both of which are under construction.

Contract 3 provides for the new vertical lift span over the Hackensack River and includes the construction of the lift span towers on the piers constructed in Contract 1 and the Kearny approach. The lift span, counterweight, elevator and all mechanical and electrical systems will be completed so the span will be fully operational, according to the schedule. Work on the pump station, surcharge, detention basin, pipe jacking and outfall on the Kearny side is being performed in Contract 3A.

Contract 4 was awarded to George Harms Construction Company Inc. in June 2017. Construction of the final bridge and approach roadway segments of the new vertical lift bridge over the Hackensack River and the improvements to the interchange at Fish House Road will be completed as part of the agreement. New connection ramps to Newark Avenue and St. Paul's Avenue will be provided, along with the demolition of the existing Wittpenn Bridge.

Project tasks include the construction of piers, construction of the east and west abutments, the ramp to Newark Avenue abutment, the Ramp A abutment and the relocated Fish House Road northbound and southbound abutments. The schedule also calls for utility relocations to accommodate the new bridge and roadway alignment.

“The estimated cost of construction is $480 million,” said Patel. “Currently, work is being done to pour the deck and the fabrication of the movable bridge, including the mechanical and electrical items.”

The barge will be docked near the bridge site until the new tours are built and shipped to the site this fall. At that time, cranes will lift the pre-fabricated orthotropic deck from the barge onto the piers. Future work includes the placement of the orthotropic deck in the coming months, and the completion of the pump house by fall 2018. NJDOT officials anticipate the new bridge will be open for certain traffic in 2019, with the entire project completed in 2022.

Said Patel, “The biggest challenges have been coordination and communication with the many outside stakeholders to ensure each piece of the project advances on time, so project delivery and completion will be on time.”

Route 7 is considered a crucial component of the NJDOT Portway Corridor, allowing traffic from the west to gain access to the Holland Tunnel and New York City, as well as business and industrial areas within Jersey City. Route 7 also serves as a main trucking route, providing for the movement of people and goods between the New York Metropolitan area and the greater area of Kearny and the Meadowlands.

Project improvements will strengthen access to and between the Newark-Elizabeth Air/Seaport Complex, intermodal rail facilities, trucking and warehousing/transfer facilities and the regional surface transportation system.

Travel has not been affected during construction, because the new structure is adjacent to the existing bridge, which remains open to motorists. Near the end of the project, traffic will be shifted to the completed bridge.