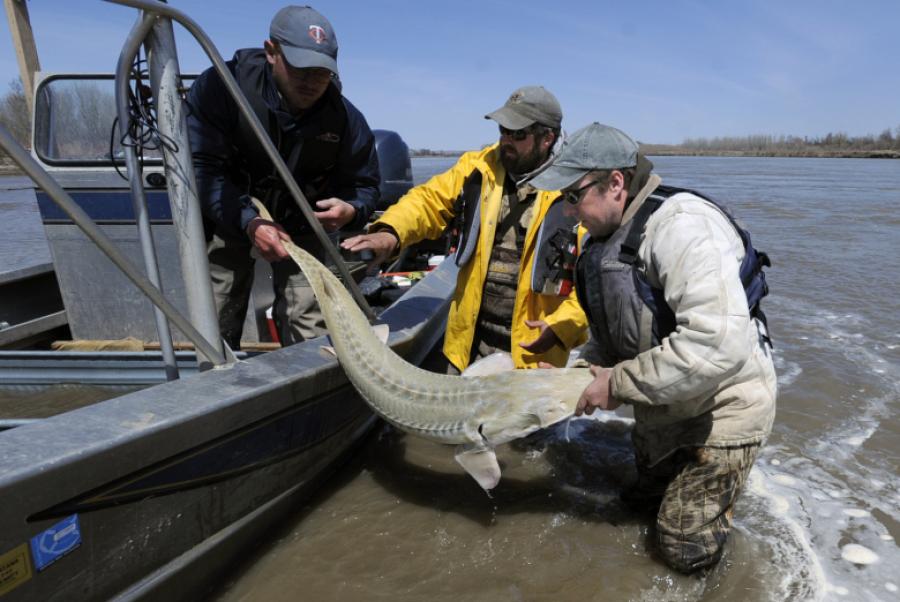 Wildlife advocates plan to challenge the approval of a new Yellowstone River dam aimed at benefiting Montana and North Dakota farmers that critics say could kill off a dwindling population of a fish species dating to the time of dinosaurs.

A bypass channel would be built alongside the concrete irrigation dam near the Montana-North Dakota border to let endangered pallid sturgeon reach upstream spawning grounds.

But scientists don't know if the fish would use the channel. Advocates for the few remaining wild sturgeon said betting they would is an unacceptable risk because they could die off altogether if the channel plan does not work.

Pallid sturgeon are one of the rarest native fish in the Missouri and Mississippi River basins, have a distinctive, shark-like snout and can live 50 years, reaching 6 ft. (1.8 m) in length.

Defenders of Wildlife and the Natural Resources Defense Council said in a court filing they are negotiating with officials on how to proceed following last month's dam construction approval by the U.S. Army Corps of Engineers and Bureau of Reclamation.

The groups have a lawsuit pending over the $57 million project, which U.S. District Judge Brian Morris temporarily blocked in 2015.

Morris must give his approval before construction can begin on the dam that would supply water to about 400 farms that produce sugar beets, wheat, barley, alfalfa and other crops.

Bypasses to circumvent dams have been used with mixed success for salmon and other fish populations in the Pacific Northwest and New England, but never for pallid sturgeon.

Montana Fish, Wildlife and Parks biologists have said the best option for sturgeon would be to remove an existing rock weir so the fish could pass freely up the river.

A government-sponsored peer review panel that examined the Yellowstone dam proposal expressed doubts that the bypass channel would help the fish make their way upstream and beyond the dam.

Removing the weir has been rejected by federal officials as too costly. It would require the installation of pumps to provide water to farmers.

Tens of thousands of hatchery-raised sturgeon have been released into the Yellowstone River to prevent the species from dying off, but it's still unknown if those fish will migrate and breed in the same manner as wild fish. Female pallid sturgeon do not reproduce until they are 15 to 20 years old.

Meanwhile, fewer than 125 wild pallid sturgeon remain. They are all decades-old animals that biologists have warned could soon disappear entirely unless they are able to reach their spawning grounds farther up the river and beyond the proposed dam construction site.

About 55,000 acres of cropland in the two states are dependent on an irrigation system already in place at the proposed dam site. That system uses the rock weir to divert water into canals tapped by the farmers for their fields.

The Congressionally-authorized irrigation system was built in 1909.

James Brower, the manager for the irrigation project, said federal wildlife officials already have said the rock weir can be maintained, meaning there's no immediate worry that farmers who rely on it will run out of water.

But Brower said a protracted court fight over the dam would end up hurting pallid sturgeon.

“People need to realize court delays are definitely going to hurt the fish. We're just talking about theoretical problems beyond that,” he said.- AP