Canopy to Keep ATL Visitors Out of Elements 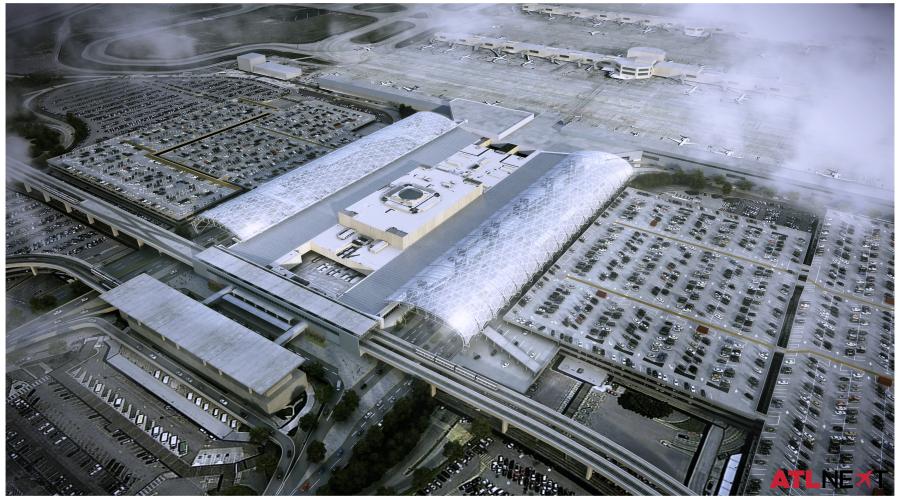 A rendering of the completed $138 million canopy project at Atlanta’s Hartsfield-Jackson International Airport.

Work is under way on a $138 million canopy project at Atlanta's Hartsfield-Jackson International Airport, a massive endeavor calling for the intricate juggling of traffic and construction and one guided by principles of safety, quality and production.

“Those are the orders,” said Todd McClendon, director of project management of International Aviation Consultants. “We will not compromise.”

The canopies were designed to help keep passengers out of the elements. Atlanta receives an average of 50 inches of rain annually, and is known for its hot summers. It also occasionally sees snow.

“We're, like any airport, all about customer service, providing the best experience for the passengers when they are arriving or leaving any of our concourses,” said Tom Nissalke, interim assistant general manager of planning and development. “Given that we are continuing to see arriving passengers grow, we see a lot of customers on the curb.”

Among the biggest challenges is traffic management.

The north terminal project began in May 2017 with the “enabling work,” which included rerouting traffic, moving some of the baggage handling and skycap check ins. The steel work began in October. It's slated for completion this summer when work on the south terminal is scheduled to begin.

The project, part of a multi-billion modernization plan for the airport, consists of 19 sections of steel measuring 860-ft. long and approximately 165-ft. wide. The trusses are fabricated in Lubbock, Texas, where they are assembled to ensure the correct fit, then disassembled and trucked to Atlanta in five pieces.

“We have to assemble it off site in what we call a lay down yard,” said McClendon. “We truck pieces in the night before for what we are going to set the following night. It's a big shell game. The next night's work set out the previous night. We only have so much room to stage this steel. The 194-foot long truss shows up in five pieces and we reassemble it in three.

“What we call the mid span connects to the first and is set on shoring tower,” McClendon said. “The third piece is joined to it and that makes up a complete truss. And then we'll do another on the opposite side and then we begin to join the trusses with diagonal steel that ultimately goes 860 feet in front to the terminal.”

The steel frame will be covered in plastic.

The equipment on site includes two 160-ton Tadano rubber tire cranes and two Leibherr 110-ton track rigs, as well as a “sea” of scissor and boom lifts — upwards of 35 — with 75 percent of the construction crew working on lifts 73 ft. above the roadway.

The project also requires the most highly certified welders in the trade.

“We're welding in a round pipe that is elevated on angles, said McClendon. “It calls for 6G welders. That's the highest certification that you can have for the architecturally exposed structural steel (AESS). We're literally welding in some places while we're on a platform, we're welding while looking up. They are able to weld on all angels. The average welder can't do that. We now have 20 of those folks on our site. We found probably seven [6G certified welders] initially and so they've had to bring people in from other parts of the country. They had to get people certified. It's been a combination of folks here in Atlanta, bringing people in and getting some additional training. All here from the U.S.”

The Hartsfield-Jackson International Airport was recently named as the world's busiest airport for the 20th year in a row.

“The canopies create a real statement for entering the terminal, especially at night when it is lit up,” said Nissalke. “You can see the steel from I-85. It will be quite the sight.”