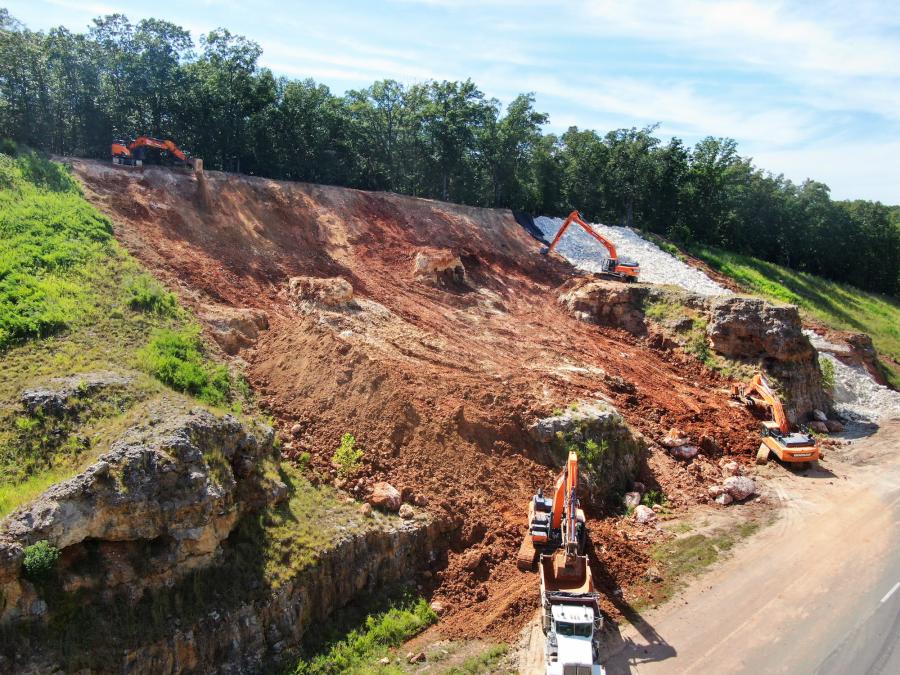 A lane drop helped dump trucks pull off to the roadside site before backing in at an angle onto a specially built pad. From there, materials were loaded and unloaded as excavators navigated the 8-ft. embankments above.

After massive flooding hit Missouri in 2017, the hillsides along several stretches of Highway 5 sloughed down onto the road. When FEMA sought to shore up one such slope outside Camdenton, a city of 4,000 in the central part of the state, the steep task fell to Geromini Concrete Paving LLC, (GC Paving) in the nearby town of Montreal. 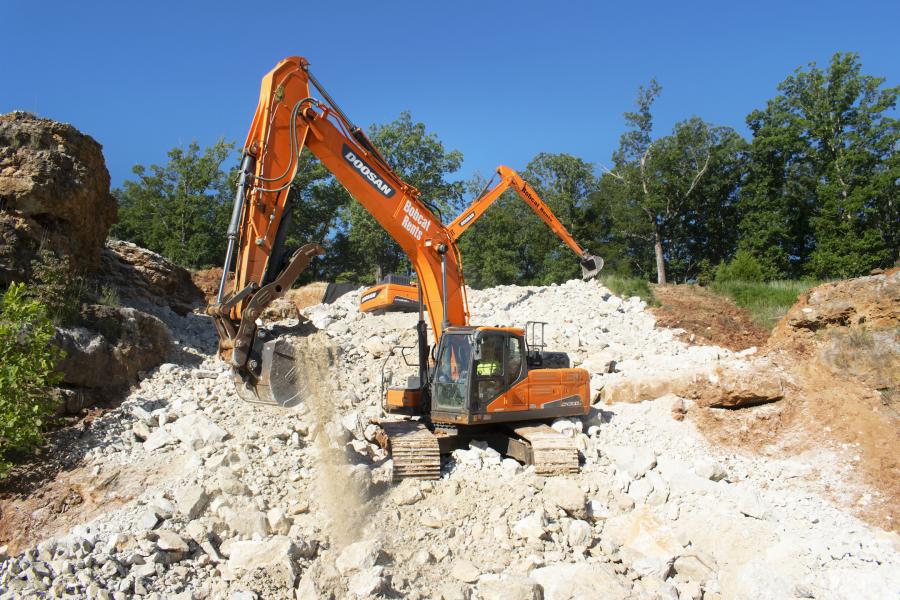 The firm, owned by Jamie Geromini, has carved out a niche in the concrete industry by doing a "bit of everything besides asphalt," she said, but the slide repair proved an uphill climb — literally. Much of the work took place on a 45-degree embankment along the highway as the hill's eroded soil was swapped out for sturdier rock.

The solution: Nate formed a "chain" of machines lining the hill from top to bottom. With dump trucks waiting beside a still-active highway, a fleet of Doosan crawler excavators moved dirt down the slope. A reverse process later helped move materials uphill.

A lane drop helped dump trucks pull off to the roadside site before backing in at an angle onto a specially built pad. From there, materials were loaded and unloaded as excavators navigated the 8-ft. embankments above. 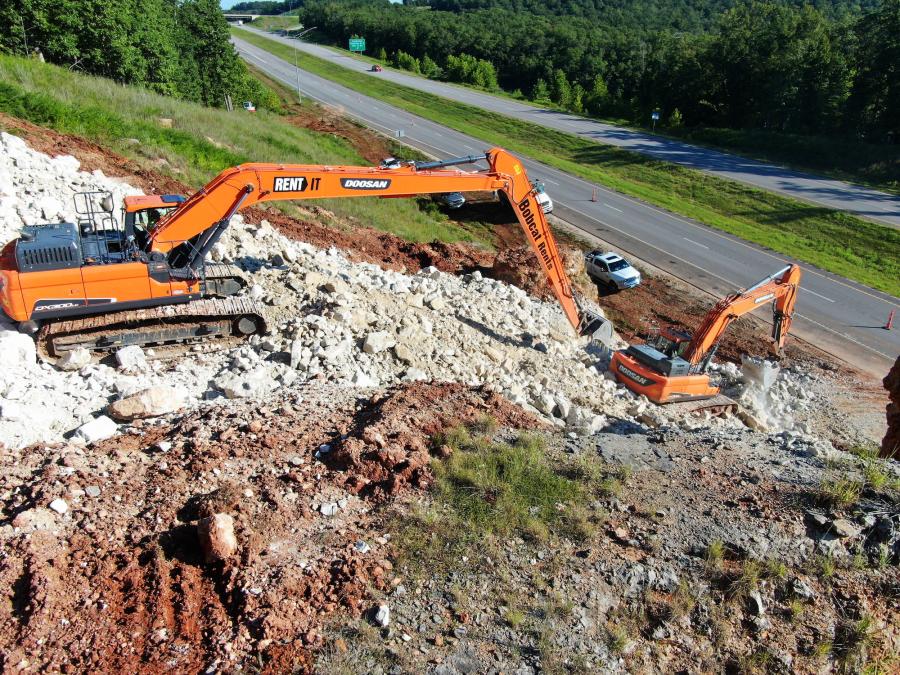 The machines on the project included the Doosan DX190W-3 wheel excavator as well as crawler excavators, including the DX235LCR-5 and DX350LC-5. GC Paving purchases and rents its Doosan construction equipment from Bobcat of Columbia — the authorized Doosan dealer in the area.

From a pad in the middle of the slope, a rented DX300LC-5 excavator with a super-long-reach boom and arm moved material as quickly as two standard excavators would have, Nate said. The DX300LC-5 super-long-reach excavator has a maximum reach of 57 ft. and a digging depth of 45 ft., 2 in. That saved time and money on the federally funded project, which came with a Nov. 1, 2019, deadline to avoid hefty fines, he noted — the kind that can add up to $50,000 a day. The project started in mid-July, leaving a roughly three-month window.

"Time in our line of work is pretty much of the essence," said Nate, a 30-year veteran in the industry.

GC Paving is typically the general contractor on such projects, Jamie and Nate said. Their son, Dakota, runs crews on the ground while they provide oversight. The flood required a slew of repairs across the state, Nate said. 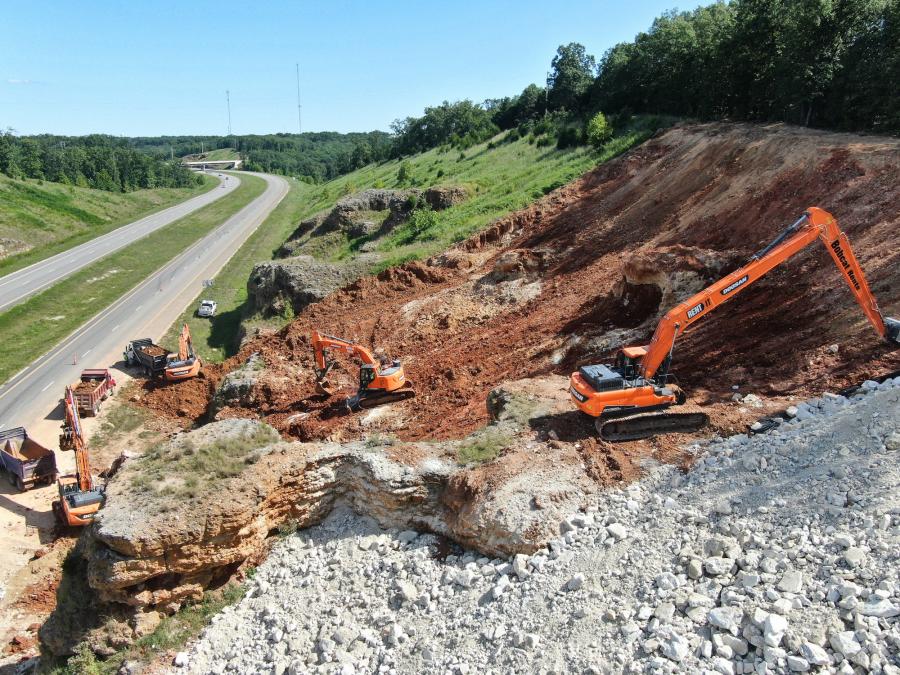 "There were areas that had slid — you could cut a house in two, almost — and there's big pockets, and it just keeps getting worse and worse and worse," he said.

Digging out the soil left 30-ft.-deep expanses on the slope at points, ratcheting up GC Paving's first major test for the excavators, crews reported that they proved plenty durable for the job.

"When you're messing with rocks the size of small trucks moving around, they worked amazing," Nate said. "I mean, we're beating them up and they're still just getting in there and just going after it."

Right Tools for the Job

According to Nate, "We ended up calling them and they had this machine, the DX300LC, and we ended up using it. It ran just the same, if not better, than other brands I've used, in my opinion." 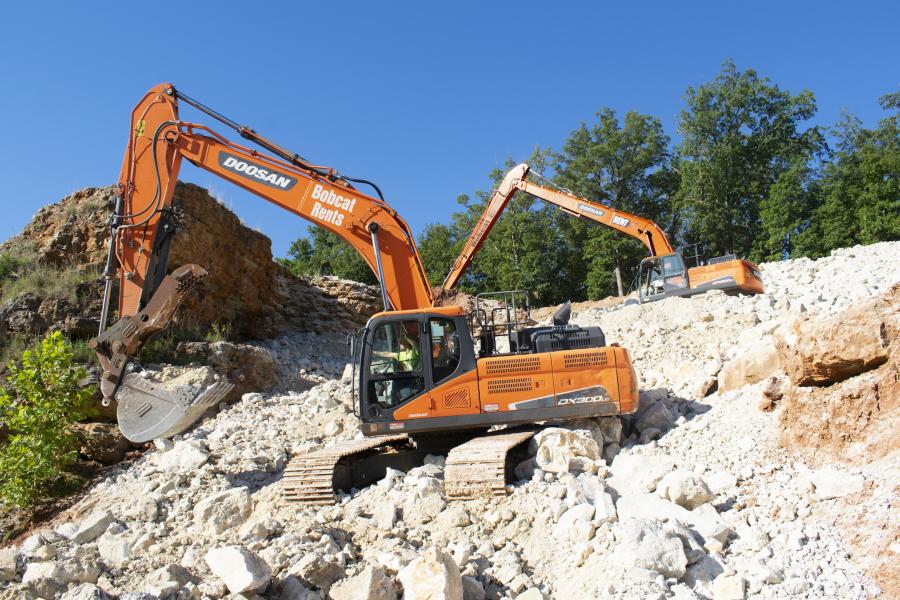 Nate still operates heavy machines alongside the 21 other employees, but those machines have changed a lot over the years. Nate appreciates the rearview cameras that eliminate blind spots on his current excavators.

"We're able to immediately communicate with Bobcat of Columbia and see what we're looking at and how we can get the machine there," Nate said. "They'll swap out machines with us and give us a machine for free until ours is repaired."

And in a world of steep job sites and even steeper fees, "downtime is everything," Jamie said.