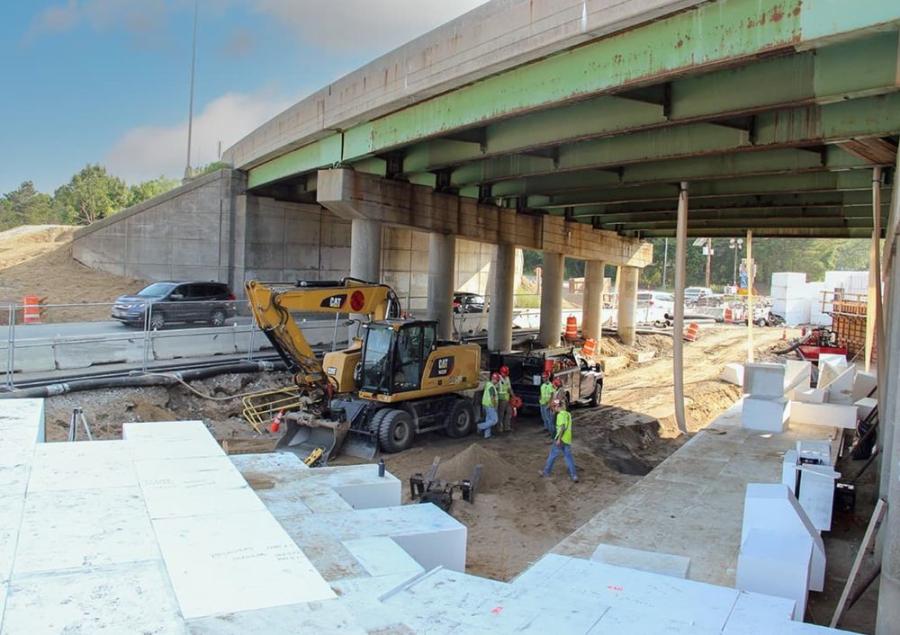 Geofoam blocks will fill the space underneath the interstate highway. (MaineDOT photo)

MaineDOT used the Accelerate Bridge Construction technique to reconstruct the Veranda Street bridge in Portland as the key part of a project that will be completed later this year.

Using the ABC technique, the old Veranda Street bridge was demolished on April 22 and the new bridge opened on April 25.

"Conventional bridge construction techniques would have involved the construction of a temporary bridge and would have likely created traffic congestion for three or four years," MaineDOT (MDOT) said. "This ABC method compressed significant traffic impacts to a period of 60 hours." 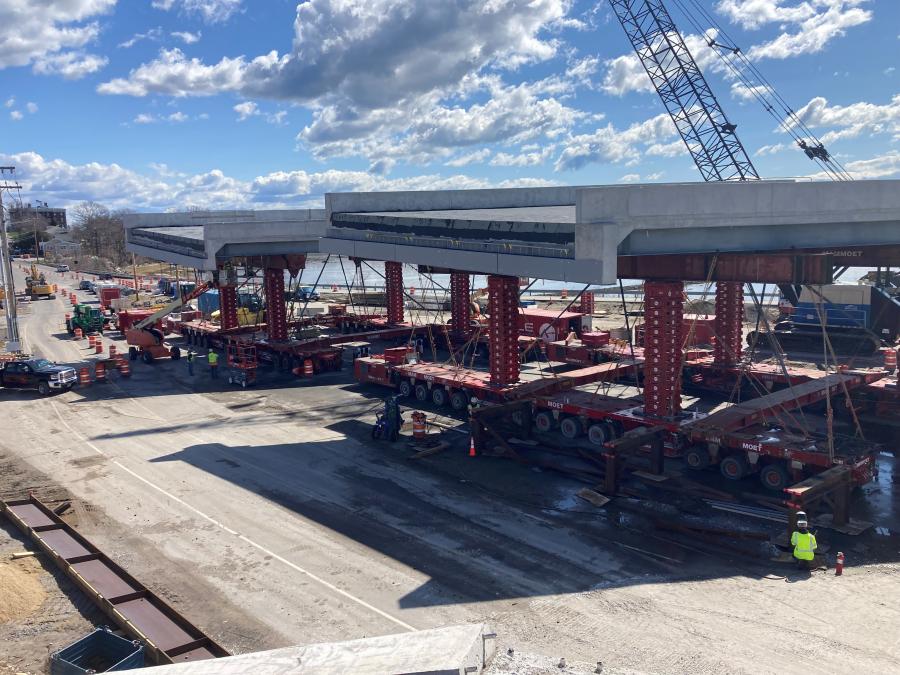 Cianbro of Pittsfield, Maine, was the lead contractor on the job and was assisted by Shaw Brothers of Windham, Maine.

The existing bridge was built in 1961 and after 60 years of heavy use, its condition had deteriorated. The old roadway geometry underneath the interstate bridge was confusing and contributed to a high incidence of crashes at the intersection of Veranda Street and the I-295 southbound on-ramp, MDOT reported.

Planning for the Veranda Street Bridge replacement project began in 2016. Construction began in March 2021. Crews built the foundations for the new structure beneath the existing bridge while also building two new bridge decks on the east side of the interstate. Each of these new bridge decks weighs approximately 800,000 lbs. and was set atop the new foundations during the interstate closure. This project also involved the use of geofoam blocks as fill in the bridge embankments.

The project called for workers to raze the existing bridge, remove the rubble and use massive self-propelled transporters to lift the prefabricated bridge deck into place, officials said.

The new bridge was built in two sections that were installed after the old bridge was demolished.

Demolition of the old bridge began as soon as I-295 closed on April 22. The last beams from the old bridge were removed late morning on April 23. Self-Propelled Modular Transporters (SPMTs) began moving the new southbound bridge span into place and then moved the new northbound span into place. This was the first time MaineDOT used SPMTs.

The SPMTs were provided by Mammoet of Rosharon, Texas, a company specializing in engineered heavy lifting and transport of oversized and heavy objects.

"Mammoet utilized our MJS300 [modular jacking system] and 48 axles-lines of SPMTs [self-propelled modular transporters] to move bridge spans related to the Veranda Street Bridge project in Maine," said Amanda Lunsford, Mammoet marketing manager. "Mammoet was allotted 12 hours to move both the southbound and northbound spans into place and set; however, this was accomplished in only 9.5 hours. Each span weighed 800,000 lbs. [400 tons] and measured 80 feet long by 47 feet wide.

"This was the first time that Mammoet used its MJS300 system and cradles on a highway bridge," she added. "The one-of-a-kind innovative system is integrated in that it allows the jacks to sit in cradles, which are built inside the trailer. This saved our client time and money by not requiring the set up and transport of two separate systems [a jacking system and a falsework system], which are typically required. Mammoet jacked each span up 18 feet in the air using 14 cassettes in the modular jacking system raising the bottom of girder approximately 20 feet off the ground. Each span was precisely moved on 48 axle-lines [12 x 4 lines] of SPMTs and set into position, aligned and lowered.

"Mammoet employed a crew of six, plus three iron workers. The project was executed ahead of schedule and without incident or injury. The new bridge is designed to last for the next 100 years. This was the first accelerated bridge construction project ever completed in Maine." 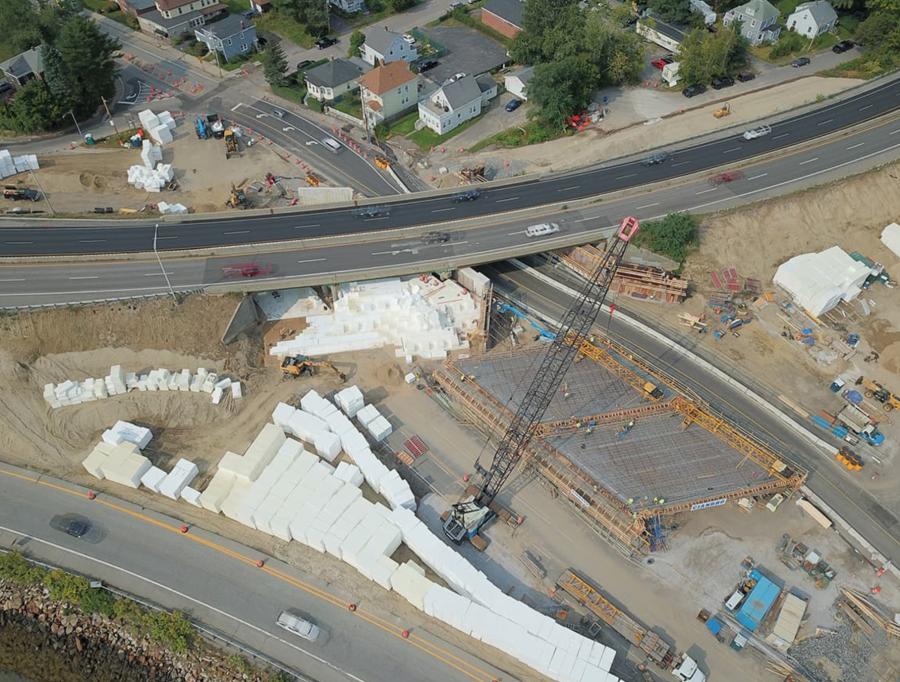 "We did demo work, grading and paving for the project and placed geofoam below the bridge," said Chris Dyer, project manager of Shaw Brothers.

More work on this project will continue in the coming months. MaineDOT is planning another paving operation in October. Parts of the interstate roadway on either side of the new bridge will likely settle as much as one inch throughout the next several months. This is normal and expected. All work is scheduled to be finished by the end of 2022, MaineDOT said.

When the project is completed, the reconfigured Veranda Street will consist of two 11-ft.-wide vehicle travel lanes, two 5-ft.-wide bicycle lanes, a 5-ft.-wide sidewalk on the north side of the road and a multi-use path on the south side that extends to the Martin's Point Bridge. The revised roadway configuration also will allow for an open green space between the reconfigured Veranda Street and the nearby shoreline. This change accounts for nearly 1.5 acres of roadway/median to be converted into the green space area.