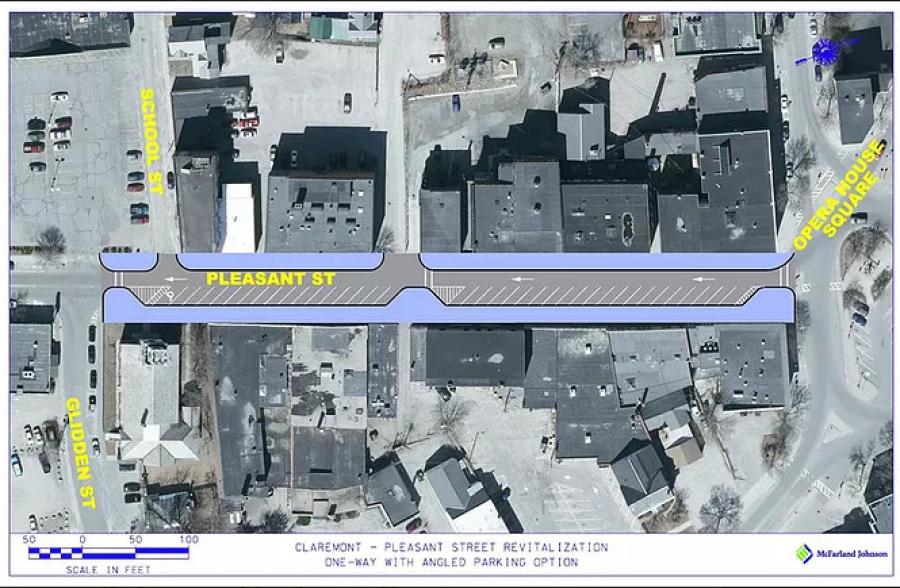 The renovation of Claremont, N.H.'s Pleasant Street remains set to begin construction in the late spring to early summer of 2021, starting with plans to reroute city traffic sometime in May, according to project managers.

"The project is really happening and really on schedule," Claremont Planning and Development Director Nancy Merrill told the Eagle Times on Dec. 19.

The city expects to put the construction contract out to bid in February, Merrill said.

Project designers Brian Colburn, from McFarland-Johnson, and engineering firm based in nearby Binghamton, N.Y.; and Johnathan Law from IBI Placemaking, a Toronto landscape planner, held a public presentation via Zoom on Dec. 18 to give residents and city officials an updated conceptualization of the Pleasant Street plan, a $4.8 million endeavor aimed to spur economic activity and socialization in the city center.

The project will reduce Pleasant Street's vehicle traffic to one-direction and increase the ratio of pedestrian space along the roadway by 50 percent. The expanded pedestrian walkways aim to accommodate greater foot traffic, outdoor dining, seating and gatherings.

Colburn said that construction will begin "in the May timeframe," starting with the installation of a temporary traffic signal at the intersection of Glidden Street and Broad Street. This signal will enable Glidden Street traffic to safely access both directional lanes of Broad Street, which is a key component to the newly envisioned traffic plan for the downtown.

Once the new traffic signal is in place, traffic on Pleasant Street will be converted to one-way for construction to begin.

"We're doing that because it will be a lot easier to work on Pleasant Street if we're only dealing with one lane of traffic," Colburn said.

The construction will focus on one side of Pleasant Street at a time to allow vehicle and pedestrian traffic on the other. Colburn said this approach has proven effective in their other renovation projects to minimize the negative impact on Pleasant Street businesses during the improvement period.

"We want to strike that balance between keeping the access with businesses and parking spaces while giving the contractors enough room for construction so they can get in and out as fast as they can," Colburn said.

New truck routes also will take effect prior to construction on Pleasant Street, according to Colburn. The project managers have continued to coordinate plans with the New Hampshire Department of Transportation (NHDOT).

The Dec. 18 meeting also allowed Law to share conceptualizations of an upgraded Pleasant Street. The new images incorporate many of the design elements city residents favored during a public discussion in September.

Though the design style is not yet finalized, street benches will be colored red, based on community feedback. Modern streetlights will replace the current lamps and overhead stringed lights are planned for a pedestrian gathering and outside dining area.

Fans of the previously suggested rainbow-colored crosswalk, which appeared in Law's initial conceptualization, but rejected by the NHDOT, might find solace in that the proposed seating for the corner along Opera House Square will be multi-colored to create a similar feel of welcoming and inclusivity, according to Law. As he predicted in previous meetings, the state transportation agency does not permit coloring in crosswalks beyond the traditional white paint.

"We are very grateful for the participation of the public for the last two years in this process and in giving their feedback," said Merrill.