Like most excavators, a variety of attachments are occasionally used with the Cat 6015 to leverage the machine's robust design and massive hydraulic power. However, in 2022, Cleveland Brothers Equipment Co. Inc. partnered with its customer Independence Excavating (DiGeronimo Companies, Independence, Ohio) and took these capabilities to the next level.

By combining the Cat 6015 with a Fortress 145FS Series mobile shear, and extending the working range of the machine with a custom-designed and built Pierce Pacific three-piece boom/stick, the Cleveland Brothers team was able to create a one-of-a-kind demolition machine capable of tearing down, wrecking, cutting and processing the harshest materials in the most difficult to reach places.

"This machine produces over 300 gallons per minute in hydraulic flow at the end of the stick, resulting in a 10-second cycle time for our shear," he said. "Its performance is impressive."

LeBeau said that his team chose to partner with Cleveland Brothers because of their close relationship and previous experience purchasing Cat 6015s from them.

"About 85 percent of our fleet is Cat machines," he said. "Because we have contracts across the country, the nationwide serviceability and parts that Cat [Caterpillar] offers are key."

This build concept was crafted with the demolition of decommissioned power plants and steel mills as it's intended use. As projects come up, Lebeau said the machine will most likely be traveling the United States.

"The Independence Excavating team is excited that we were able to work with Cleveland Brothers to build this." Lebeau said. "It's going to continue to put us in a league of our own. Pushing the limits of the machine through innovation is how we set ourselves apart from other demolition companies." 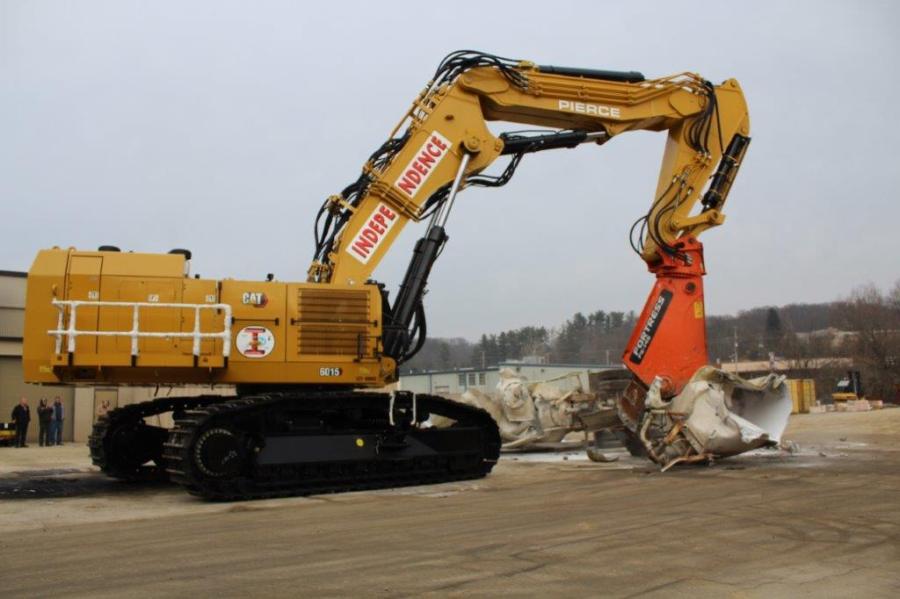 The modified Cat 6015B built by Cleveland Brothers finishes its test run; lifting then demolishing a 2.5-ton concrete trailer.