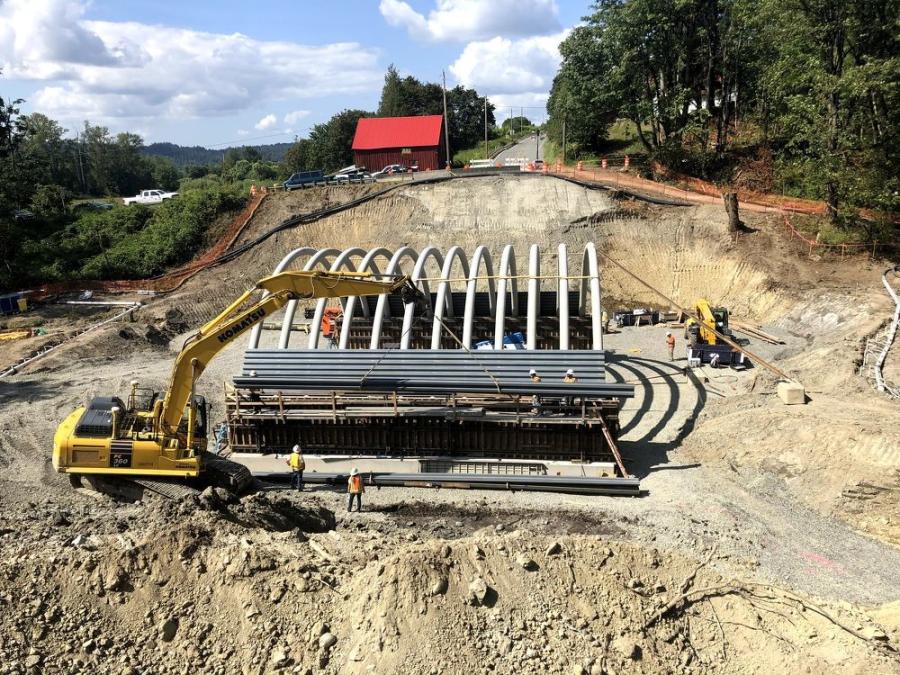 The rural community of Duvall, Wash., has become the first town on the west coast to utilize an AIT Bridges composite bridge system. The bridge, made up of 12 fiberglass composite arches, was trucked from AIT's Brewer, Maine, facility to Duvall, about 50 minutes northeast of Seattle.

"This construction marks several milestones," said Wendell Harriman, senior operations engineer at AIT Bridges. "The bridge's arches span 51 feet and were cut in half to facilitate cross-country shipping. The bridge required no transportation permits due to its ability to be cut and then easily reassembled on site." 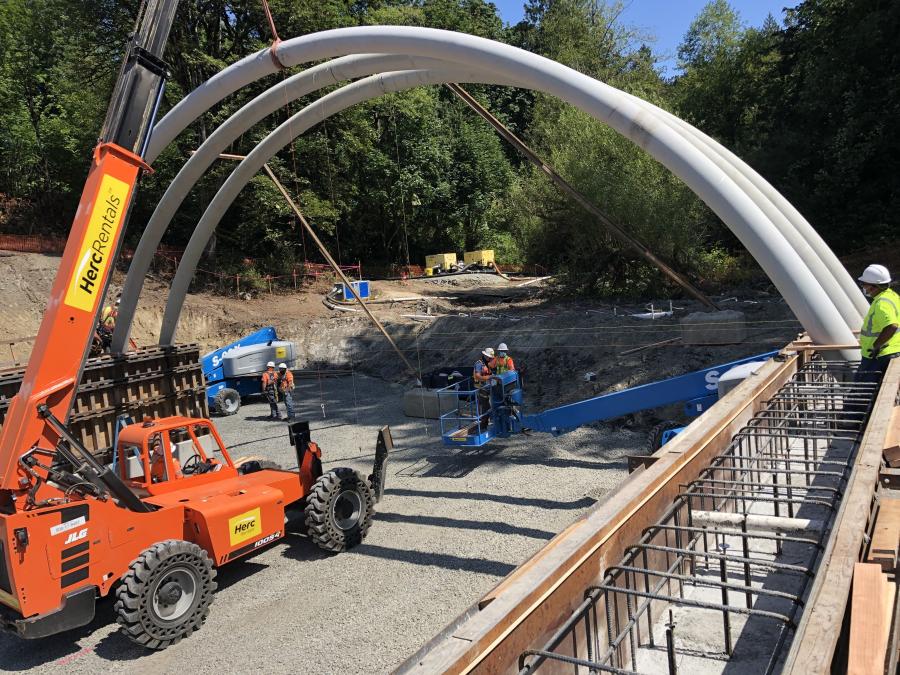 Contractor Goodfellow Bros Inc., known as GBI and headquartered in Clackamas, Ore., utilized a Komatsu PC360 excavator (among other excavators), rear dump articulating trucks and haulers for the job.

"Something unique to that project was tandem-style dump trucks," Harriman said. "They had a regular dump truck, which is like a dual axle dump truck. In addition to that, they had a trailer-like dump truck behind that dump truck. They back up the trailer and dump the trailer where they want the material. Then, they pull ahead, jackknife the trailer, which has a 20-foot-long boom, and dump the front truck. They moved 26,000 banked cubic yards — probably about 1,200 to 1,500 truck loads. They had to move a lot of earth and they need to put a lot of it back. We wanted to use as much native material as possible."

Installation of the arches calls for very light equipment, with each section weighing only 350 to 450 lbs.

"It's really simple to set it using a small telescoping boom forklift or boom truck," Harriman said. "Excavators are often used as long as they have the reach. You do not need a crane. That's one of the nice things. They're also pretty friendly working with overhead utilities. This project in particular is 50 feet in a hole with a concrete foundation, and 150 feet from roadway access. The stream is relatively small because it had been constrained by a previously constructed culvert.

"They basically block off the roadway, cut 300-foot-long at the roadway elevation and then you bevel down so you are 150 feet wide at the bottom and then you have room to put in all foundation by the side of the stream. Our structure is in place and the remaining backfill goes on top of the structure and retaining walls to fill in the hole and bring it up to grade Then they pave over the whole structure."

The bridge system was developed in cooperation with the University of Maine's Advanced Structures and Composites Center. AIT Bridges is a division of Advanced Infrastructure Technologies. The product has been available and installed since 2010 and also can be found in Florida, Michigan, all the New England states, Pennsylvania and the islands of Trinidad and Tobago. The composite arch bridge system uses concrete-filled composite tubes and FRP decking and is touted as an "affordable and superior alternative to traditional steel and concrete small-to-medium bridges." 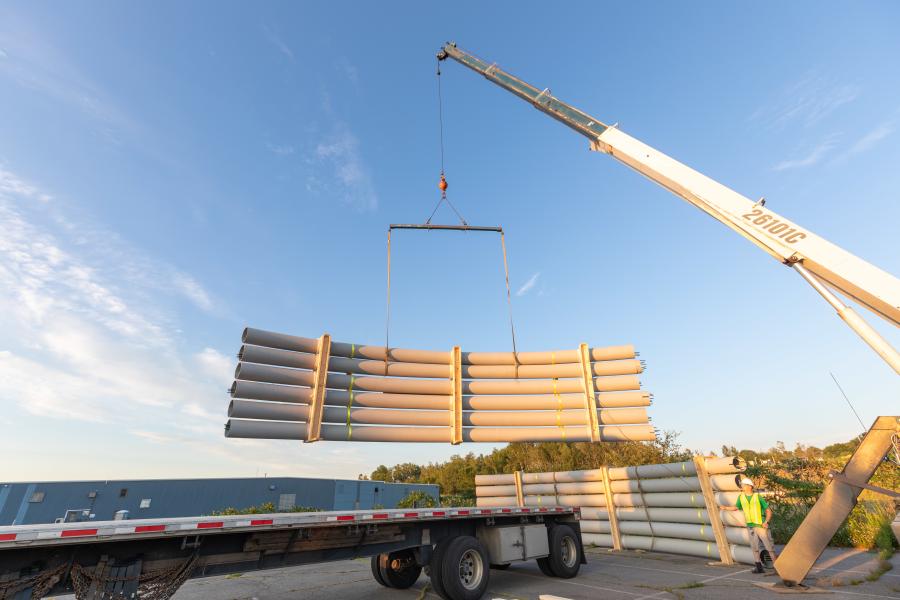 "It took some planning to achieve the transportation and assembly of the first ever composite bridge system to the West Coast," said Ken Sweeney, president and chief engineer of AIT Bridges. "We saved time and money by splicing the bridge arches as they were trucked across the country. No permits, no road closures and now that the materials are on site, we are looking at an expedited bridge building process."

This latest installation comes as the Washington Department of Transportation (WSDOT) works on an $8.2 million project to revitalize fish passage impacted by current bridge and culvert structures.

"Loutsis Creek goes through a 5-foot culvert under SR 203 just south of Duvall," said Tom Pearce, spokesman of WSDOT. "The culvert is difficult for fish to navigate at times because water levels can be too low or can move too fast. To improve passage for native and migratory fish, we will replace the culvert with an arched structure and build a more natural creek bed under the highway. This will improve fish runs and open an additional 3.1 miles of habitat for fish and other aquatic creatures.

"The approximately 13,000 vehicles a day that use this portion of the highway needed to detour via Northeast 124th Street, West Snoqualmie Valley Road Northeast and Northeast Woodinville-Duvall Road. The detour added about two miles to the trip. The crews allowed local access near the creek, but for safety reasons no one — including pedestrians and bicyclists — was allowed to cross the work zone."

Completion of the project is set for fall 2020. CEG