The project will address the structural deficiencies of the existing bridge, increase the substandard vertical clearance and widen the structure to improve traffic. 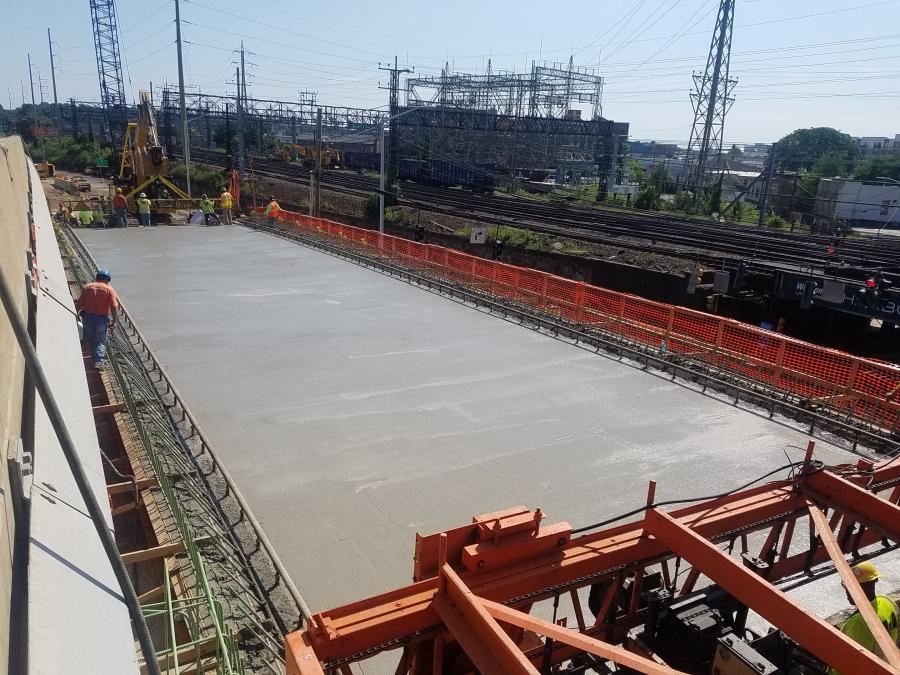 YCC used a truss screed machine to establish grades and provide a uniform finish on the new exit 8 flyover bridge.

The $36.5-million state-funded project is to be completed by June 2018 and will address the structural deficiencies of the existing bridge, increase the substandard vertical clearance and widen the structure to improve traffic operations. The existing deficient vertical clearance and narrow width result in a traffic pinch point for north-south traffic.

“It took about 10 years to get the project from feasibility study to construction,” said James Pelletier Jr., P.E., ConnDOT transportation supervising engineer. “The current project is Phase I, which includes the ramp bridge and walls along South State Street. Phase II includes the replacement of the railroad bridge, the walls supporting the railroad, and track level work.”

A widened Atlantic Street with the vertical clearance increased to 14 ft. 6 in. will enhance access to Station Place, SITC, Stamford CBD, SUT and provide a north-south route to the south end that better accommodates traffic demands. Upgrading the roadway also will reduce congestion on Washington Boulevard by providing an improved alternate north-south route to the station and to the parking garage accessed from Station Place and Atlantic Street.

“There is no specific growth related to this project, but ambient traffic levels in the area continue to grow at between 1 percent and 3 percent per year dependent on specific development or re-development that has been going on in the area,” said Pelletier. “Casual observation would seem to indicate a slowing in development activities and would probably equate to a slowing in traffic growth.”

However, Harbor Point in the South End of Stamford has grown substantially with many new apartment units and restaurants.

“The city of Stamford wanted easier north/south access to the south end, which I believe was the catalyst for this project,” he said.

The ramp bridge is a new structure. The walls along South State Street were constructed in 1980. Plans are dated 1978. There also was work done on I-95 in 1987. The railroad bridge was constructed around 1890 and rehabilitated in the 1980s.

The Exit 8 northbound flyover bridge will create a mid-block touchdown of the off ramp, decreasing traffic tie-ups at Atlantic Street and eliminating the likelihood of traffic backing up onto the interstate as was common prior to construction. The mid-block ramp touchdown allows right turns onto Canal Street, a traffic movement that was not allowed when the ramp touched down at Atlantic Street due to the adjacent South Canal Street traffic lanes.

“The final roadway configuration will include six lanes of vehicle access under the reconstructed MNRR bridge and additional turning lanes along Atlantic Street at the intersections of South State Street, Manhattan Street and Dock Street and Station Place,” Pelletier said.

On the railroad side, the primary focus of the project is the addition of Track 7, providing improved access to the MNRR New Cannon Line. Prior to construction, the Atlantic Street rail bridge was a pinch point in the rail line.

Like any project, the contractor and ConnDOT found unexpected challenges along the way.

“Due to significant increases in the amount of rock encountered under the railroad tracks, Aaron Enterprises, a subcontractor to YCC., proposed to auger the duct ports instead of using traditional pipe jacking methods,” Pelletier said. “Because the bits wanted to 'walk' along the sloped rock face, keeping the augers online proved difficult. Working double shifts for six weeks continuously, Aaron and YCC were able to meet the tight schedule needed to allow utility work to progress.”

YCC proposed construction alternatives that have kept the project on — or ahead of — schedule while maintaining the budget and reducing department risk. One such instance was a proposal put forth to use 42-in. drilled shafts incorporating W30 x 235 steel piles in lieu of the 24-in. shafts proposed in the contract.

“In doing so, we eliminated the need to install ground anchors and the risk associated therewith,” Pelletier said. “In lieu of a credit, the department built project milestones into the contract that further ensured timely project delivery and allowed for improved coordination with the follow-on contract.”

“The utility work has us using standard equipment such as excavators, hoe rams and tri-axle trucks,” said YCC Project Manager Thomas Faughnan. “There are approximately 230 drilled-in piles, which required the use of more specialized equipment. We are using a Bauer BG 20 and a Casagrande B125 pile drilling rig for this installation. The concrete requires a simulated masonry finish, which adds the weight of form liner to the wall forms. We are using a Manitowoc 888 crane to remove and set this formwork.”

The project's location in downtown Stamford makes minimizing the impact on traffic flow a constant focus for YCC. The work area is limited and requires careful planning.

“ConnDOT has been a very proactive partner in finding solutions to any problems that are encountered,” Faughnan said. “Several jointly developed solutions have allowed changes, which have resulted in a savings to the state of Connecticut. AECOM, the design engineer, and the city of Stamford have also been an important part of a team effort. This close cooperation has the project finishing ahead of schedule and under budget.”

YCC, based in Yonkers, N.Y., is a general contractor that specializes in public and private infrastructure projects with core business lines in highways, bridges, rail, transit, water/wastewater and energy/environmental projects. Founded in 1946 by Edward J. Petrillo, YCC has continuously operated for 70 years without interruption and under the same name and family ownership. YCC has worked on such historic and iconic projects such as New York's Penn Station and Grand Central Terminal.

“Yonkers Contracting does projects in the range of $5 million to $200 million. This project would be considered mid-range in size for us,” Faughnan said.

During Phase II, jump spans will be installed allowing for the construction of new bridge abutments. This will require track outages but will not reduce rail service. In 2019, demolition of the existing structure will begin and between June 28, 2018 and July 8, 2018, it is expected that the pre-built bridge units (PBUs) will be slid into place.

“The Department has been targeting this date for more than two years, including incentives in the contracts to ensure success,” Pelletier said.