Construction Employment Increases in 281 Metros From October 2017 to 2018 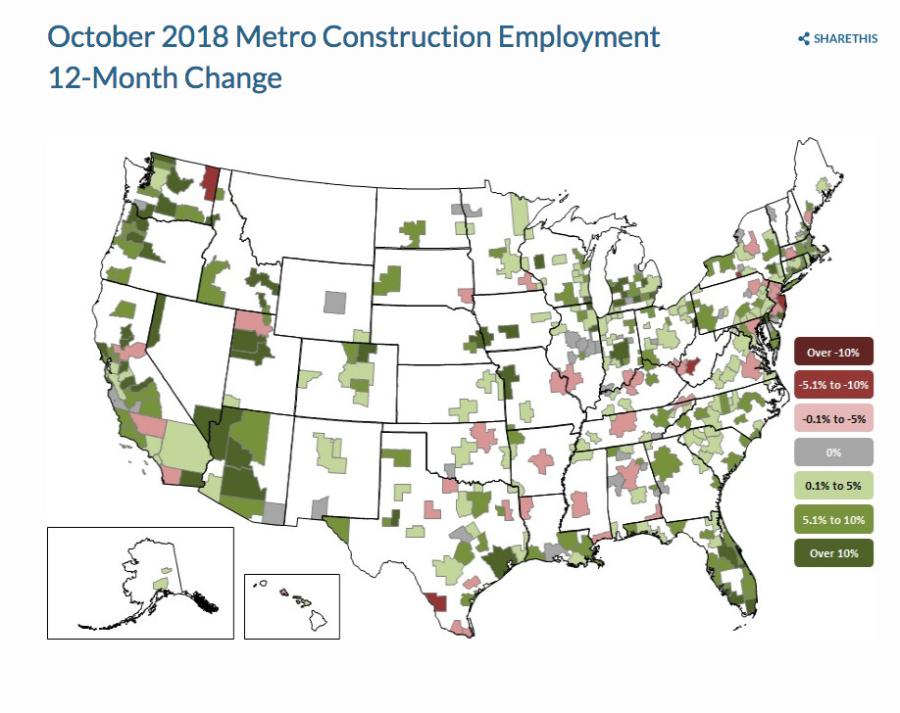 Construction employment grew in 281, or 78 percent, out of 358 metro areas between October 2017 and October 2018, declined in 43 and was unchanged in 34, according to a new analysis of federal employment data released Nov. 29 by the Associated General Contractors of America. Association officials cautioned that such widespread employment gains might not continue without policy changes to increase the supply of qualified workers.

"Construction employment has been increasing at a greater rate than overall employment in many metros," said Ken Simonson, the association's chief economist. "But many contractors report they are having difficulty filling hourly craft worker positions, even though construction pay exceeds the average for the overall economy."

Simonson noted that construction job openings at the end of September jumped 55 percent from a year earlier to 278,000, the highest September level in the series' 18-year history. Meanwhile, the unemployment rate for construction workers fell to 3.6 percent in October, the lowest October rate since that series began in 2000.

Association officials said the steep increase in job openings and the record low unemployment rate in construction show the need for policy measures to increase the supply of workers. They urged government officials to modernize and double funding for career and technical education over the next five years and enact immigration reforms that would enable construction employers to bring in foreign workers when there are not enough locally available construction workers.

"The construction industry is improving the economies of metro areas nationwide, but those gains are at risk," said Stephen E. Sandherr, the association's chief executive officer. "Public officials should promptly overhaul career and technical education to prepare more students for rewarding and high-paying careers in construction. Meanwhile, there is an immediate need for skilled construction workers from outside the U.S."