Construction Under Way on Northeast Alabama Intersection to Improve Safety 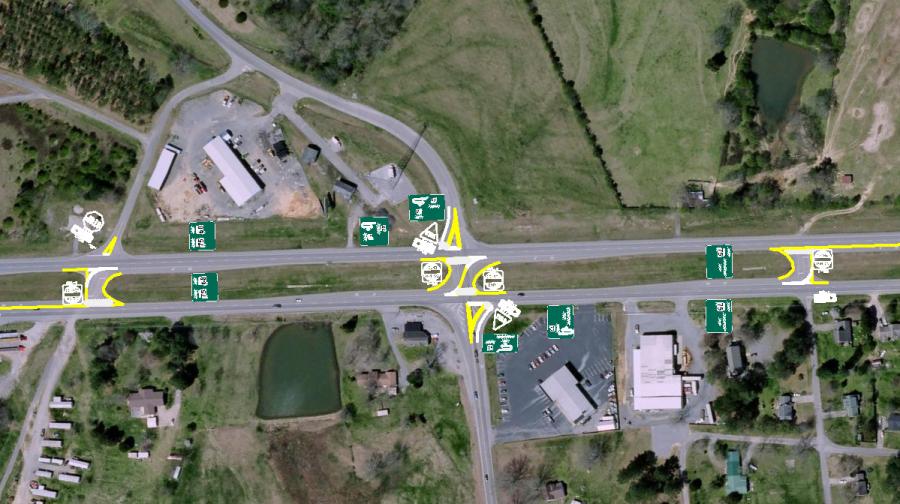 A Restricted Crossing U-Turn [RCUT] intersection will not allow drivers to directly cross or turn left from AL 68/Hustleville Road. Instead, motorists coming off Hustleville Road will need to make a right-hand turn followed by a U-turn at a designated median turn area.

Motorists traveling along Alabama Highway 75 are maneuvering through construction that began Nov. 29 to improve safety at the road's intersection with AL 68/Hustleville Road.

The key crossing is in Marshall County in the northeast portion of the state.

"Following the Thanksgiving holiday, there will be a couple more weeks of work, weather permitting, to convert this intersection to a Restricted Crossing U-Turn [RCUT] intersection," he said. "This is an alternative intersection design that we have found to be very successful in reducing injury and fatal crashes compared to conventional intersection designs."

The new intersection will not allow drivers to directly cross or turn left from AL 68/Hustleville Road. Instead, motorists coming off Hustleville Road will need to make a right-hand turn followed by a U-turn at a designated median turn area.

"This type of design was chosen based on the operational and safety benefits," Burkett said. "Studies have shown RCUT intersections effective in reducing injury and fatal crashes compared to conventional intersections, and so has our own experience since we began implementing this type of design.

Burkett said ALDOT's rationale for using the RCUT design is that it "breaks that traditional crossing/turning movement down into a series of simpler decisions and movements with significantly reduced exposure to conflicts with other vehicles."

Residents have wanted a stoplight to be installed at the intersection for years, according to the Sand Mountain Reporter in Albertville. However, Burkett said that was not a viable option.

A traffic accident on May 17 involving at least two vehicles and four injuries — two of which required a medical chopper transport to Birmingham — led residents to organize a petition on Change.org.

"It seems as if a wreck happens at this intersection every few days," Aarica Cross, petition author, told the Albertville news source. "Due to the high speeds [that] people are traveling on the highway, the wrecks are often very serious or even fatal. A traffic light is the only way to help solve this issue and to help save lives."

Cross added, "A flashing light will not suffice. This is a four-lane highway intersecting with a two-lane highway…a traffic light is a necessity."

ALDOT examined traffic counts at the intersection, Burkett noted, along with the number of accidents at the AL 75/AL 68 crossing, the severity of injuries, and other factors before deciding what improvements or charges may be required.

"We looked at other options, including signalizing the intersection," he added. "But with a traffic signal, we believe we would continue to see severe crashes resulting from motorists running red lights, due to the isolated location."

Burkett said motorists can expect single-lane closures in either direction, and temporary closures of crossovers on AL 75 at AL 68, Dane Drive to the south, and Lance Drive to the north during construction.

As part of the project, the crossovers at Dane Drive and Lance Drive will be designated for U-turns, and each will become right-in and right-out only, the Albertville newspaper reported.