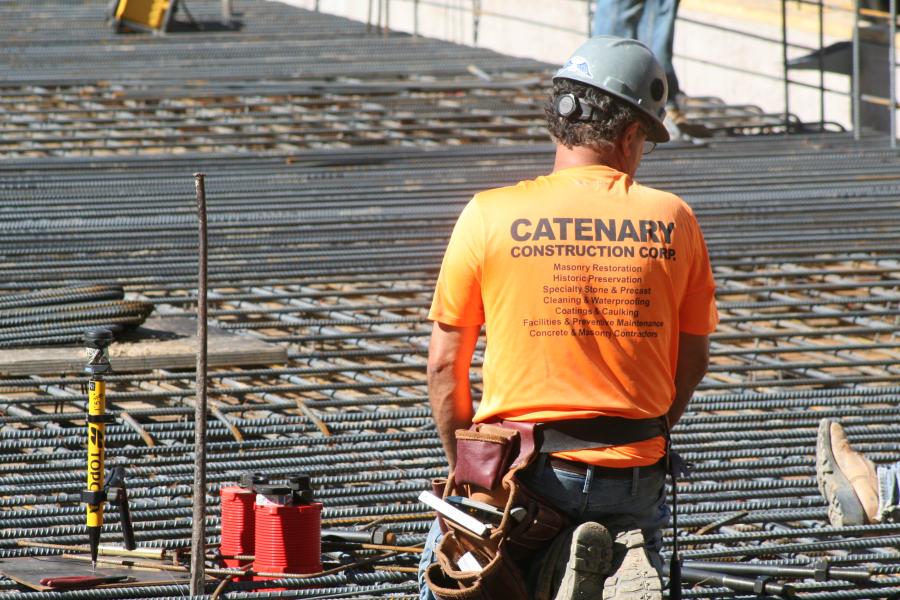 Catenary Construction tackles projects of all sizes — everything from big box retail stores to luxury apartment complexes to large senior living centers to hospitals and more.

One of the keys to the success of any equipment dealership is insight into its customers' needs. To illustrate: Western New York's Admar Supply Company, because of a long relationship with local firm Catenary Construction, knew they were beginning to question their traditional methods for handling construction layout. So when Catenary became intrigued with the promise a Topcon LN-100 layout navigator held, Admar's sales team immediately knew two things: that the contractor was an ideal candidate for that solution and that they would soon be dramatically changing the nature of their layout operation. Admar was right on both counts.

In addition to its reputation as one of Western New York's premier renovation and restoration specialists, Catenary Construction frequently subcontracts to area construction managers and general contractors. In that particular role, the Rochester-N.Y.-based company tackles projects of all sizes — everything from big box retail stores to luxury apartment complexes to large senior living centers to hospitals and more.

“We focus our new construction efforts in the areas of concrete and masonry,” said Billy Farmer, Catenary's vice president. “Our concrete services include the building and pouring of foundations, the construction of poured concrete walls, and the installation of concrete slabs. On the masonry side, we work with a range of materials including block/CMU, brick, stone, stucco and precast. My father founded the company with the intent of being the best at what we do and he's seen Catenary grow into one of the area's top firms of its type.”

In addition to its restoration, concrete and masonry work, Catenary also is the go-to source for a wide range of protective services designed to extend the life of the work it completes. These include the application of coatings and sealants, as well as caulking, waterproofing and more.

For decades now, Catenary has relied upon traditional layout techniques for work on new construction foundations and structural bearing plates, and probably would still be doing so were it not for that trade show visit this year.

“My foremen were aware of some of the available technology that could help us with layout,” said Farmer. “Up to that point, we'd been relying upon a crew of two men going out, setting hubs, using string lines and pulling tape. So we went to World of Concrete and talked to some of the companies offering layout solutions. When we got to the Topcon area, we sat down with Greg Downing, Admar's general manager who was working alongside Topcon personnel, and he proceeded to tell us about the LN-100 layout navigator from Topcon Positioning Systems.”

Farmer and his team were told that the LN-100 was the result of Topcon blending its self-leveling laser and robotic total station technologies. The net result was a new, simpler way to perform construction and BIM layout. Instead of the laborious methodology upon which they'd relied for so long, they could now simply position and turn on the layout navigator to self-level and connect, automatically, controlling the instrument using MAGNET Field data collection software and a Topcon FC-5000 data collector.

By show's end, Farmer had narrowed his choices down to three manufacturers, and plans were made for additional meetings and demos once they returned back to their Rochester location.

On the Spot Solution

It was at that point that Admar's Evan Spencer assumed the lead for his company, talking to Farmer and Catenary's field personal about their expectations, and hearing what they'd already learned from other manufacturers trying to make inroads with the company.

“We were up against two other manufacturers: one solution that was bit cheaper than what we were offering and another that was a bit more expensive,” he said. “What set the LN-100 apart from the other two instruments, however, had little to do with price — it was all about the need for up-front data preparation with the other systems. They both needed Catenary's people to send them a CAD file so that they could manipulate it to get it to a point where they could use it in their instrument.”

Having experienced that delay, when it came time for the LN-100 demo, Catenary's estimator/project manager, Nick Alloco asked Spencer if he needed a file to take back with him as well. Spencer answered “no” and asked Alloco to simply upload the CAD file.

“Right there in their office, we took the file, uploaded it into the data collector and, within 20 seconds, Nick had a CAD file in front of him, ready to lay out,” said Spencer. “That was a huge selling point for us. Nick said it took the one manufacturer two weeks to get something prepared for them. Yet here we were going almost immediately onsite. It was a real eye-opener that they could do that through MAGNET Field, the software that accompanies the LN-100. They also liked the tool's ease of use and ability to accept such a wide variety of file types. It was a nice session all around.”

Duly impressed with its performance in the demoes, Farmer and Catenary agreed to a rent-to-own agreement with Admar for the LN-100, FC-5000 data collector and a Panasonic Tough Pad, and immediately put it to work on a couple of projects in and around the Rochester area. In addition to the layout tool's ease of use, Farmer said there's little denying the impact it's had on layout-related production.

“For one thing, we've gone from a two-man crew manually tackling the layout, to just one man using the Topcon LN-100,” he said. “That, in itself, is a major plus for us. However, we have also removed the risk of stakes getting moved or being run over during the course of everyday construction, and we are seeing much better accuracies — with less effort — than ever before.”

Spencer added that Catenary's move away from the traditional layout methodology — and the benefits it's brought — were expected, but are still great to see confirmed.

“For the field guys, it's changed the way they do things a lot,” he said. “They now have one man going out, setting up the instrument, checking into another control, literally having the print in the palm of his hand, walking around to every point he needs to stake out and doing so with extreme accuracy. That means they've reduced typical layout times from six hours down to two. In addition to just streamlining the layout process however, the Topcon solution gives them more feedback about what their accuracies are — and they've been consistently within .1 of a foot. When I see things like that, I not only know that I've done my job, I feel I've helped make an already-great company even better.” CEG