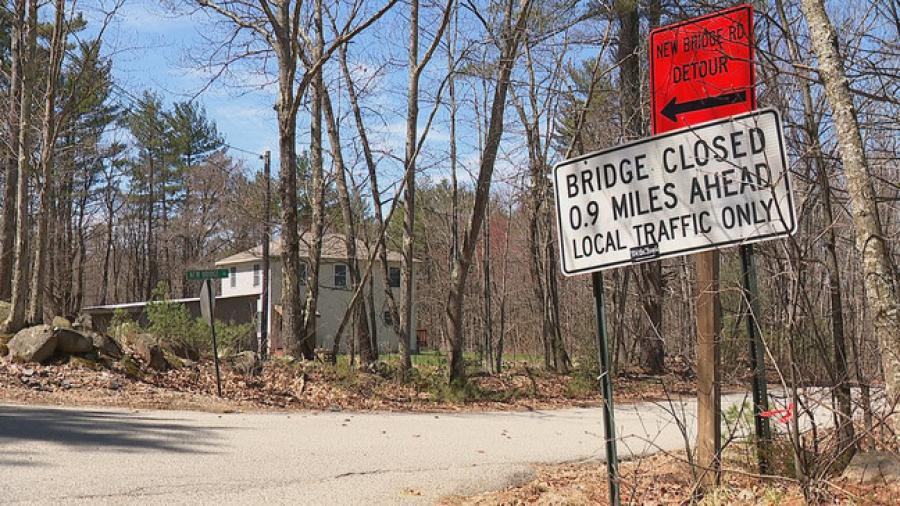 New Bridge Road in Lebanon has been without a bridge for 10 years. (WGME image)

A new timeline has been established to restore a vital link between two communities on the Maine-New Hampshire border after they were cut off more than 10 years ago.

Back in 2012, the span over Salmon Falls River that connected the New Bridge Road in Lebanon, Maine to Milton, N.H., was demolished after it was deemed unsafe. It was located next to the New Bridge Marina in the small Maine community.

Since then, those living along the road feel as if they have been cut off.

"It was fairly busy," said Joel Dockham, who has lived on New Bridge Road for more than 30 years. "Just business-wise, [with] the marina and stuff, I know that really hurt."

While there are other ways to get into New Hampshire, the detour adds miles to the drive, noted Portland, Maine's WGME-TV in a recent report. There also have been concerns with public safety since the closest fire and police station are just across the river in Milton.

"It probably adds another five minutes or so," Dockham said, noting that Milton's two first-responder stations are off Town House Road, which led to the razed bridge.

In recent years, plans and dates have been put forward on when the bridge could finally be replaced. The town of Lebanon has even set aside $140,000 for the project.

Reconstruction Could Begin in 2024

The CBS13 I-TEAM, WGME-TV's investigative news division, contacted the transportation departments in both Maine and New Hampshire recently to find out where the project stands.

Maine DOT said it would be splitting the project 50/50 with the New Hampshire Department of Transportation (NHDOT), but that the latter is taking the lead on the new bridge's construction. Both agencies noted that an agreement was signed in March, followed shortly thereafter by the start of the design process, CBS13 reported.

"The final design should be finished in 2023," the two state agencies wrote in a joint statement. "Construction is likely to happen in 2024, and the plan is to put in a single-span bridge on the same alignment as the previous structure."

According to NHDOT, the new bridge connecting Milton, N.H., to Lebanon, Maine, is estimated to cost around $2 million with both municipalities expected to contribute some of the funding.

Folks on both sides of the river who once relied on the bridge are keeping their fingers crossed that the project will finally become a reality.

"I'd just like to see the bridge back," Dockham said.