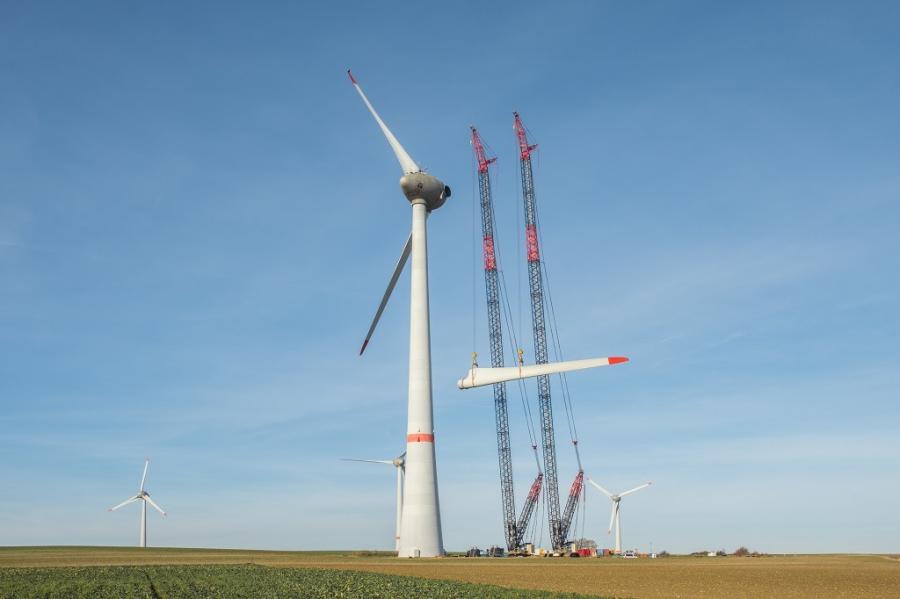 The blade had to be kept in a perfectly horizontal position at all times in order to prevent it from sliding off the slings, which is why digital spirit levels with wireless transmission capabilities were installed on the blades in advance to let the operators know, at all times, that the blades were level. (Aertssen Kranen photo)

On behalf of Enercon, Belgian crane service provider Aertssen removed the 79 ton (72 t), 190 ft. (58 m) long rotor blades from an Enercon E-126 wind turbine at a height of approximately 446 ft. (136 m) for maintenance. However, what may sound like a routine job was actually a tricky challenge, and it was only the team's extensive experience and two Demag CC 3800 lattice boom crawler cranes that enabled them to successfully carry out the corresponding lifts.

"Before anything else, we had to decide which crane to use for the job," said Aertssen Project Manager Peter Bertels.

There were two options available: either a large crane that would be able to take care of the lifts by itself or two, more compact, cranes that would tackle the lift in tandem. Ultimately, the team decided on using its two CC 3800 cranes, as they were more cost-effective, would be powerful enough when used together, and had the required reliability and precision characteristics for the lifts. However, it was first necessary to make sure that the ground bearing capacities at the work site in Estinnes would be sufficient for the two crawler cranes, as they had originally been calculated back when the wind turbine had first been erected, for the use of a single crane only. Once the green light was given though, nothing else stood in the way of using the two CC 3800 units.

Set Up and Ready to Lift in Seven Days 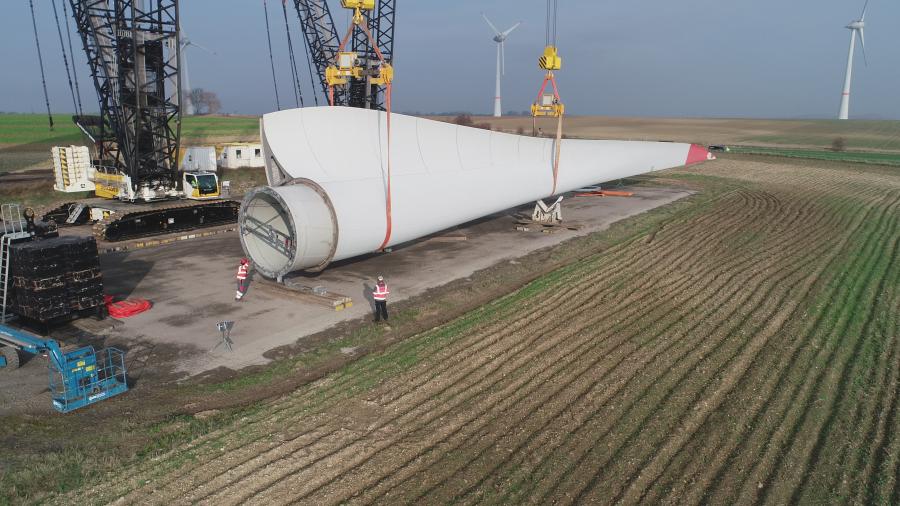 The rotor blades not only had to be taken from a height of 446 ft. and safely lowered to the ground, but they also had to remain perfectly balanced while being lowered. (Aertssen Kranen photo)

A total of 52 truck runs across a distance of approximately 80 miles were needed in order to get the two cranes from the Aertssen branch in Stabroek to the work site. Once there, a five-person Aertssen team set up the cranes within a week.

The team started by setting up the first crane, which was placed a bit farther away from the wind turbine, on the corresponding access road, and then proceeded to set up the second one, which was closer to the tower. For the configuration, the team decided on the main boom variant with a 462 ft. (141 m) LSL and 39 ft. (12 m) LF4 arrangement with an offset of 20 degrees.

Once all these steps were completed, the two cranes and the Aertssen team were ready for the technically ambitious lifts: The rotor blades not only had to be taken from a height of 446 ft. and safely lowered to the ground, but they also had to remain perfectly balanced while being lowered. To achieve this, the operator of the CC 3800 that was closer to the tower first guided a sling, which was hanging from a spreader beam with four-part reeving, around the tip of the rotor blade. The operator of the other crane then repeated this exact same procedure. When "lassoing" the rotor blades with the slings, the two crane operators depended on the instructions of Enercon employees who were also on-site for the job.

"The reason is that even though we'd installed cameras on the spreader beams, our crane operators were operating remotely, and were therefore unable to determine whether the slings were at the right height. It was kind of like lassoing a tiny animal," Peter Bertels said. 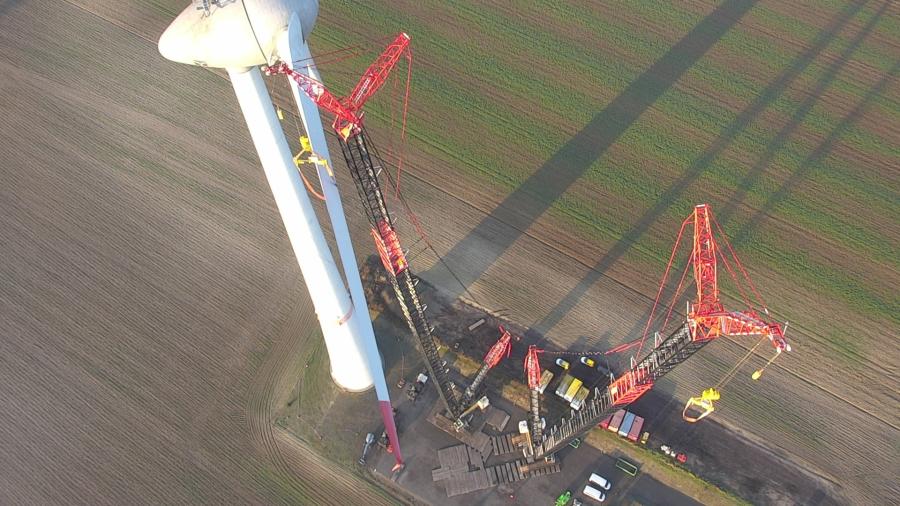 Two CC 3800 cranes were used, as the company decided they were more cost-effective than using a single, large crane. The CC 3800's would be powerful enough when used together, and had the required reliability and precision characteristics for the lifts. (Aertssen Kranen photo)

Once the two slings had "lassoed" the rotor blade, the cranes swung them to the intended rigging points, at which point it was time for the tricky part of the job: First off, the cranes needed to rotate parallel to each other in order to get the rotor blade out of the rotor. Once this happened, crane one had a gross load of 50 tons (46 t) on its hook, while crane two had a load of 39 tons (36 t). After this, the operators were able to set down the blade at a radius of approximately 72 ft. (22 m). However, the blade had to be kept in a perfectly horizontal position at all times in order to prevent it from sliding off the slings, which is why digital spirit levels with wireless transmission capabilities were installed on the blades in advance to let the operators know, at all times, that the blades were level.

Needless to say, the Enercon employees kept an extremely close watch on this part of the job, as it was highly critical to its success. And as a result, they were tremendously impressed with the precision that both crane operators demonstrated while operating their CC 3800 cranes. In fact, it was only necessary to make two brief corrections throughout all three lifts, which totaled a distance of about 400 meters.

Completing the lifts involved a relatively easier challenge: Crane one was able to finish each lift in its original position, but crane two had to move back under load in order to set each rotor blade down on the support that had already been put in place for it.

"This enabled us to complete all the lifts safely. And if the weather had decided to play nice, we would have been able to stay within the original schedule without a problem, but for two whole weeks, the wind was way too strong for us to safely carry out the lifts, so our stay at the work site went from four weeks to six," said Peter Bertels, who was still extremely happy with how the project turned out.

"We obviously had no way to change the weather, but deciding on the two CC 3800 cranes was absolutely the right choice — in fact, both their precision and their extremely responsive controls were what enabled us to literally have a handle on the situation at all times. In addition, the Enercon team supported us throughout the whole project. It was also thanks to this collaboration that the project was finalized successfully."

One week later after the required maintenance was complete, the rotor blades were reinstalled on the wind turbine.

Aertssen Group NV, which is headquartered in the Belgian municipality of Stabroek, was founded in 1964 as a small business by Marcel Aertssen. Today, the company's fleet has more than 1,000 vehicles, including trucks, bulldozers, lowbed trailers, dump trucks, and cranes. In addition, Aertssen Kranen NV has all the transport vehicles, SPMTs, semis and lifting equipment required in order to perform lifting work.