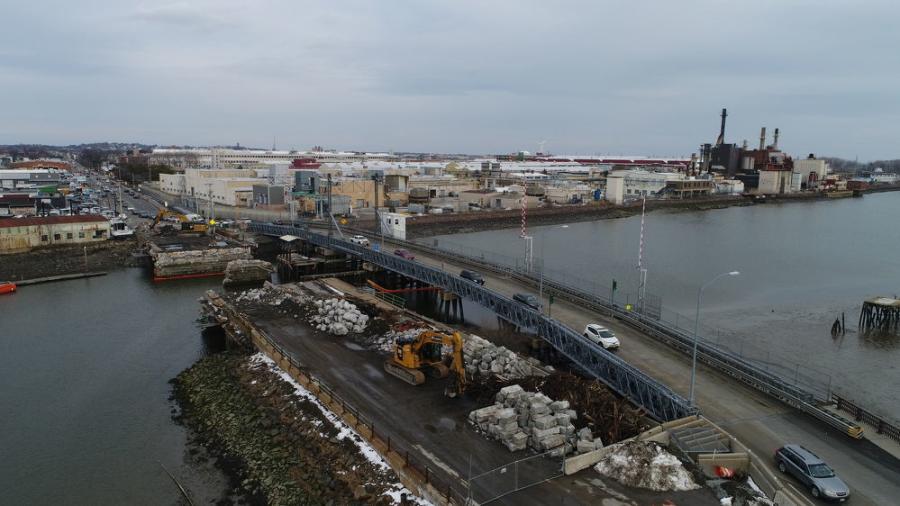 The old structure, 210 ft. long, was the oldest cantilever bridge in the country and the oldest Scherzer Rolling Lift under the supervision of the Massachusetts Department of Public Works.

The drawbridge, formerly known as the Fox Hill Drawbridge and renamed in 1985 to honor a former member of the Massachusetts House of Representatives, carried traffic on Route 107 (Salem Turnpike/Western Avenue) over the Saugus River, linking the municipalities of Saugus and Lynn, north of Boston. It was closed to traffic November 2013. 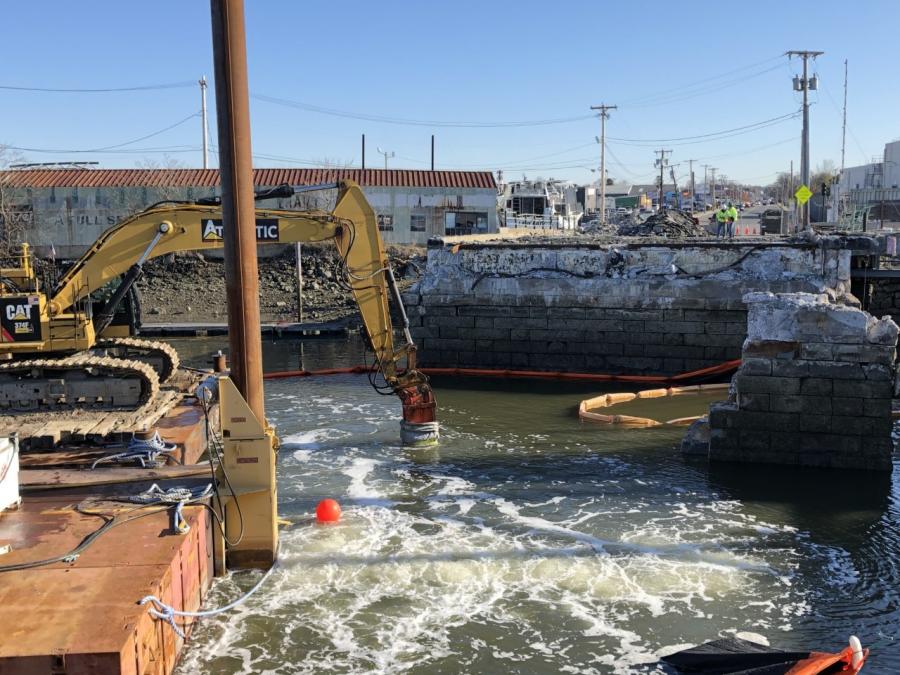 The old structure, 210 ft. long, was the oldest cantilever bridge in the country and the oldest Scherzer Rolling Lift under the supervision of the Massachusetts Department of Public Works. Streetcars originally ran across the four-lane bridge.

SPS secured the contract in November 2020, and in February 2021, Atlantic Coast Dismantling, LLC (ACD) began its demolition operations, which had excavators placed on barges.

The bridge was definitely showing its age. On Dec. 15, 2008, it was closed for several months for repair, which required the MBTA's 424, 450, 455 and 459 bus routes to be detoured through Austin Square in West Lynn through Ballard Street in Saugus. MassDOT had intended to close the bridge for replacement in early 2013. Problems with the temporary cable-lift draw bridge delayed the project significantly due to a hinge failure on the temporary draw span during what was supposed to have been final testing.

The single-lane temporary bridge, which took three years to construct, was opened to traffic at the same time as the bridge closure.

"[This bridge] has given us time for the new replacement project to be fully designed, permitted and funded," said MassDOT. "And it ensured continued access for vehicles and marine traffic while the new permanent bridge is installed."

The overall project is building a new permanent bascule movable bridge — two lanes in each direction, along with bike lanes and sidewalks — on the same alignment as the original 1912 bridge being demolished and immediately west of the existing temporary bridge. The work includes the construction of new approach bridge spans, along with reconstruction of 3,060 ft. of roadway approaches, and significant modifications and upgrades at the intersection of Route 107 with Ballard Street. on the Saugus side, a replacement of the Massachusetts Water Resources Authority (MWRA) water line across the river and an increase to the width of the Saugus River navigation channel

MassDOT also determined that the nearby Ballard Street. intersection was operating at a substandard level of service and found deficient accommodation for both pedestrians and cyclers.

The temporary bascule movable bridge will remain operational until the new bridge is constructed and fully operational. During most of the project's construction, a minimum of two vehicular travel lanes and one sidewalk will be maintained along Route 107. MassDOT will continue to coordinate construction activities in a manner that minimizes impacts to marine traffic in the area of the project. 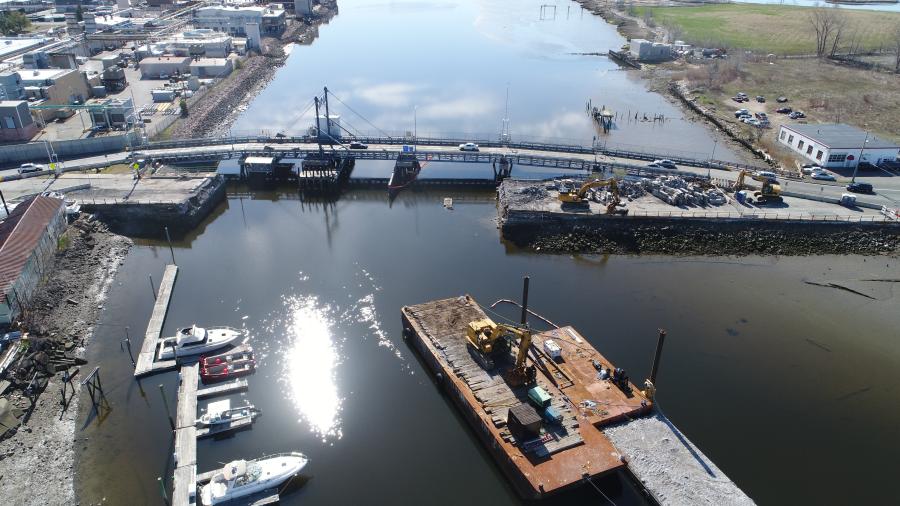 Prior to the demolition of the bridge, SPS New England did some initial water infrastructure utility operations.

"We started with the removal of the existing concrete deck and concrete beams," said Colin O'Hearn, ACD's vice president. "Floats were placed under the spans and then the spans were hammered down to the floats. Next, we removed the existing granite/concrete piers from the water. Lastly, we removed the existing abutments after the cofferdams were installed. We have performed Phase 1 demolition, which was the removal of the remainder of the existing bridge. ACD previously removed the bascule span for McCourt during the installation of the temporary bridge. ACD will remobilize to the site to remove the temporary bridge piers and approach spans once the new bridge is open to traffic.

"The biggest challenge was the condition of the existing bridge," he added. "The bridge had been closed to traffic since the temporary bridge was opened, so no repairs were performed. We overcame this challenge by carefully demolishing the spans to avoid any unplanned collapse. The use of barges on this project was vital. We would not been able to remove the spans or access the piers without the use of barges. As always, working in the winter on the water provides a lot of challenges. Ice forms on the barges, which causes slipping issues for personnel and equipment. Also, you have to worry about freezing."

The safety of the crews was paramount.

"The superintendent performed daily tool box talks and remove the Job Hazard Analysis ([JHA)] with the crew to ensure everyone understood the task at hand," said O'Hearn.

On this project, O'Hearn served as the project manager.

"I also put together the demolition plan for the abutment and pier removal," he said. "Dave Cheney Sr. was our onsite superintendent. Dave and I have worked on a lot of jobs in the past together, and therefore have the ability to work seamlessly. We had a full-time superintendent, two operators and four laborers on-site during the majority of the demolition. The crew, as usual, performed their duties to the highest standards." 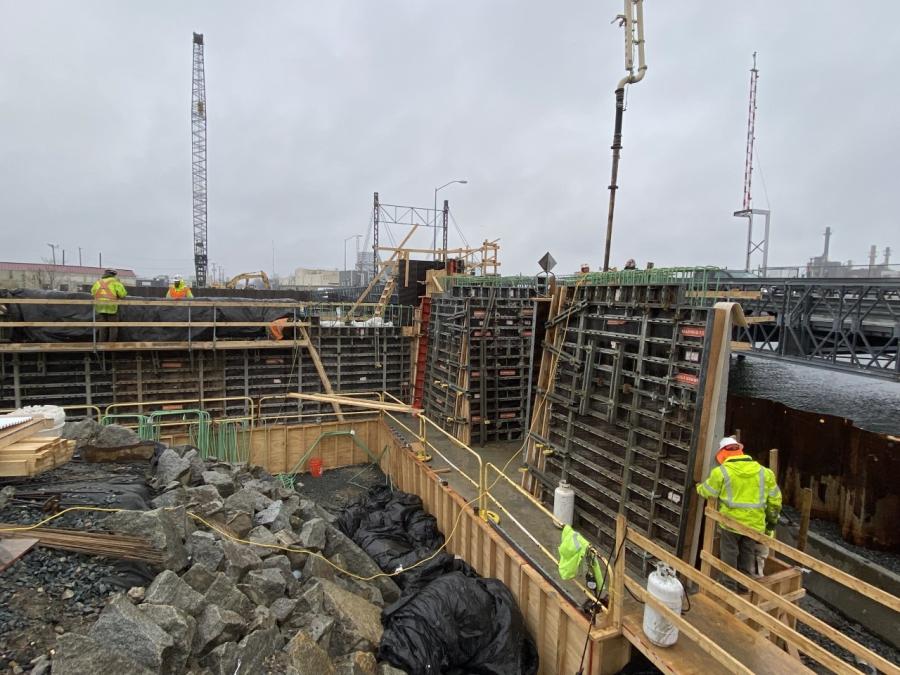 "The debris was off-loaded immediately as the work progressed," said O'Hearn. "ACD also removed an existing wood-framed structure prior to the start of the bridge demolition. This structure was in the new roadway alignment and was therefore taken by eminent domain by MassDOT. The existing structure was condemned and had asbestos inside. We had to demolish the building and load out all debris as asbestos containing materials."

"The main wear and tear issues that we encountered were  hydraulic leaks, barge leaks and hammer breakdowns," said O'Hearn. "This job is less than a mile from ACD headquarters. Therefore, we were able to get on top of repairs quickly."

ACD purchases and rents equipment from Milton CAT and other local dealerships.

SPS New England has started the construction of the new bridge and is pressing forward. Crews will be using a variety of equipment, which the company purchases and rents from local and regional dealerships. CEG