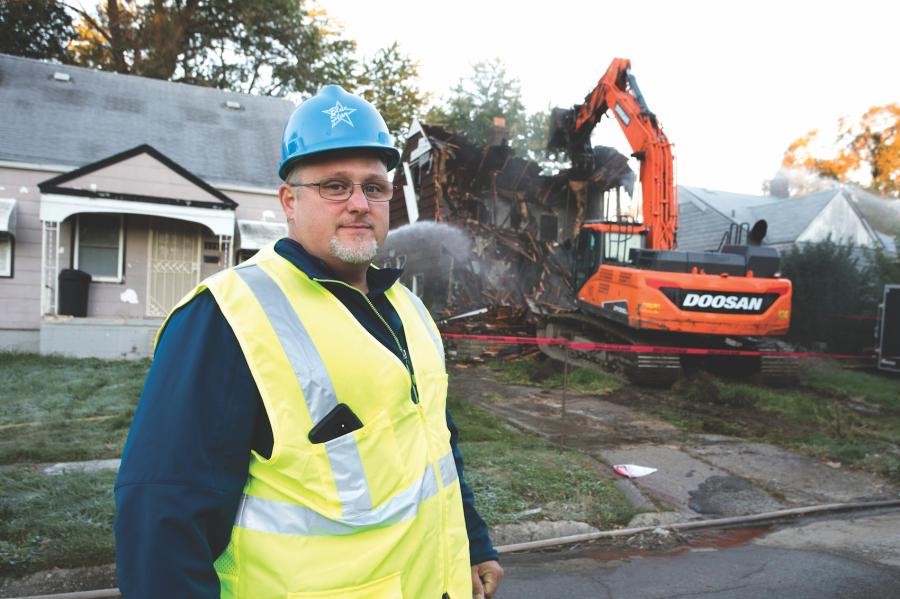 No major U.S. city has suffered more economically in the last 70 years than Detroit, Mich. What was once a thriving automotive manufacturing center with a robust middle class has fallen on hard times. The good news is companies, like Blue Star Inc., are helping the city and local organizations remove blighted homes to help improve property values.

To put things in perspective, the population of Detroit in 1950 was approximately 1.8 million, its estimated peak population. In 2017, the latest population data from the U.S. Census Bureau showed there was an estimated 673,104 residents living in Detroit. A massive exodus when tens of thousands of jobs were lost created a glut of vacant homes.

The abandoned home issue came to a head in 2013 when the U.S. federal government provided money through its Troubled Asset Relief Program. A massive grassroots survey identified more than 40,000 structures, mostly single-family residential properties, as blighted. Thousands more were at risk for becoming rundown and abandoned. Many could not be salvaged.

According to a report provided by the Detroit Building Authority and the Detroit Demolition Program, the city has demolished 16,604 vacant buildings since 2014. The organization claims if it maintains this pace, the city can remove 40,000 blighted structures in about eight years. Original estimates put the pace at about 30 years.

With as many demolition needs as the city of Detroit has, it provides an opportunity for local contractors, including Blue Star Inc., to step up and help the city with residential, commercial and industrial demolition services. Scott Krall, president of Blue Star, states the company has predominantly been working in the three Detroit-Metro area counties to perform demolition work. This includes Wayne County, where the city of Detroit is located, Macomb and Oakland counties, situated just north and northwest of Detroit. Scott has been with the company for 12 years and is the estimator for the company's complete teardowns, which require the use of heavy construction equipment.

"I consider us a production-based demolition company," Scott explained. "We are usually not at one site more than a couple of days, depending on the project."

Having the proper size equipment — both heavy and compact — makes a big difference for Blue Star. The company has strategically selected the machines it uses from smaller interior demolition jobs to larger complete demolition projects. For many years, Blue Star and its employees have partnered with Carleton Equipment for its compact equipment needs.

In 2011, Blue Star had the opportunity to purchase a new brand of crawler excavator — a Doosan DX225LC-3. The local sales specialist contacted Blue Star and asked if they wanted to try out the machine.

"It was in our market, and we happened to be looking for a machine," Scott said. "As a matter of fact, we still have the machine." 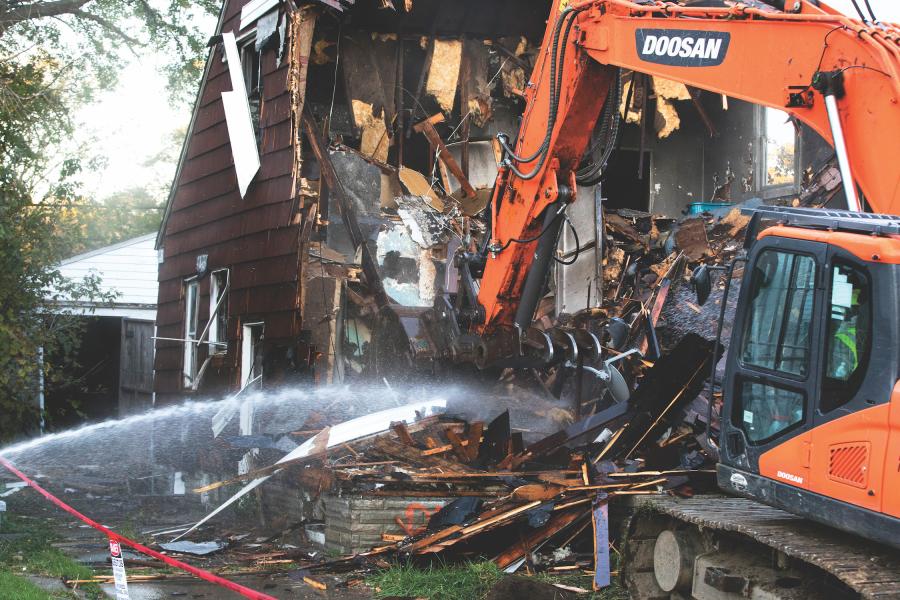 That first purchase has since led to six more Doosan excavators, from a compact DX85R-3 to the much larger DX350LC-5. "We have a long working relationship with Carleton Equipment," Scott mentions. "I think they do an outstanding job. I have several contacts that we can call whatever the situation, and they're very responsive."

Each Doosan excavator is outfitted with a hydraulic or mechanical thumb and a bucket. Operators can easily control and vary the speed at which the thumb opens or closes with the roller switch on the excavator's right joystick.

"The hydraulic main pin thumb helps the excavator operator control the demolition process," Scott said. "They can safely choose what they're taking down with the bucket and the thumb combination. Obviously, when the operators are loading out the debris, they have more control of the debris so it's not spilling and falling all over."

The larger excavators, including the DX350LC-5, are used to tear down commercial and residential structures. Once knocked down, the excavator operator will start sorting the materials. Scott said concrete is placed in one area while scrap metal goes to another side. Eventually, the excavator operators will load it into a truck or container for recycling or disposal.

Larger projects, such as a grocery store, may be as big as 125,000 sq. ft. Blue Star's contract generally includes demolishing the building and pulling out the concrete slabs and foundations. On the smaller scale, a project may be as simple as demolishing a detached garage at a single-family home or a commercial-sized building. The company's largest complete demolition project to date was a 2.1 million-sq.-ft. project in Shelby Township. Blue Star's first Doosan DX225LC excavator was on the job helping with the demolition and sorting.

"Our industry is constantly changing along with the machines that we use," Scott said. "The machines have to be up on all safety standards. Nearly all of our Doosan equipment is equipped and outfitted to go on specialized projects."

Regardless of the size of demolition projects, Blue Star does its best to recycle as much debris as possible and divert it from sanitary landfills, using its excavators to sort and load materials. In addition to the Doosan excavators, Blue Star purchased a Doosan DX225MH-3 material handler from Carleton Equipment to improve its recycling efficiency at demolition projects.

Blue Star takes the material handler to larger projects and uses it for cleaning up the debris. "If we have a debris pile, we will spread it out, and then an operator will use the magnet with the material handler to get the metal out of it," Scott said. "Doing so lowers the weight and the amount of debris we are taking to the landfills, and we can take the recovered metals to local scrapyards."

Depending on the material, Blue Star does as much hauling as it can with its own trucks. When the company gets on larger demolition sites, Blue Star will bring in brokers' containers and trucks to haul away the scrap metal. Blue Star equipment operators use the Doosan excavators or compact loaders to load the containers, and then the brokers haul them off site with their trucks.

Excavator operators sort concrete and masonry at the site. Scott said the concrete goes to local concrete crushers for recycling, and the masonry goes to a nearby landfill where they can use the material for temporary roads. "Concrete crushed product is always in need," Scott said.

"And the steel, aluminum and copper, there's value to that non-ferrous material as well. We always try to take as little to the landfill as possible."

Working in demolition requires durable and powerful equipment. Blue Star has equipped its fleet with the right mix of heavy and compact equipment to finish projects quickly and move onto the next one. There is little room for downtime as the company has multiple projects going on at the same time. Blue Star counts on the Doosan machines to be operational every day, and thanks to the company's partnership with Doosan and Carleton Equipment, Blue Star knows they'll be ready for the next demolition assignment.