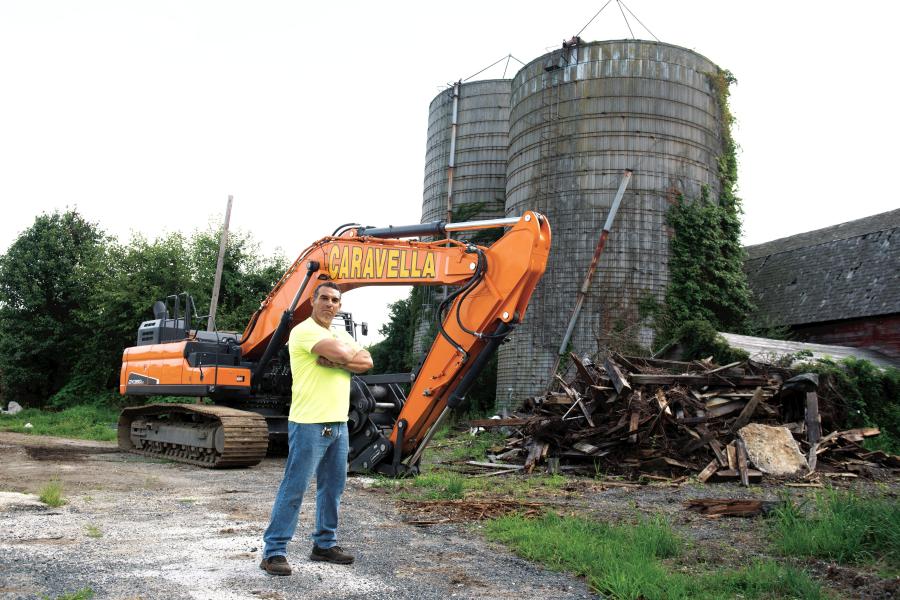 John Caravella is the owner of Caravella Demolition, an East Hanover, N.J., demolition firm that specializes in concrete crushing, excavating and site development.

If there's one thing that excites demolition specialist John Caravella, it's the thrill of climbing into an excavator and surgically demolishing a structure. He's been doing it for more than three decades and has become known in New Jersey as a leader in the industry.

Caravella is the owner of Caravella Demolition, an East Hanover, N.J., demolition firm that specializes in concrete crushing, excavating and site development. Not afraid to take on any challenges, the company works in residential, commercial, industrial and institutional settings and is on call 24/7 to help local emergency responders demolish damaged or burned structures.

Following in the footsteps of his grandfather and father, Caravella recalls helping his father lift and move bricks and blocks, and mixing cement when he was just six years old. His grandfather started the construction company in 1928 and did general construction for many years before turning the business over to John's father. In the 1980s, Caravella and his brother, Jim, began working for their father, learning the ropes of construction and gaining experience by operating equipment.

When John took over the family business, he decided to evolve the traditional construction company into a demolition-focused business and in 1985 he incorporated Caravella Demolition. He said the company does all kinds of demolition — bridges, buildings, roads — “the whole nine yards,” but much of its work is demolishing homes and buildings for two reasons:

“Hurricane Sandy really took a toll on certain towns in New Jersey,” Caravella said. “The state is buying out homeowners in flood-prone areas and we're knocking them down to make them green, open space areas.”

When Caravella climbs into the seat of an excavator, such as his Doosan DX350LC-5, what he does could be considered a work of art. He said not just anyone can tear down a building, especially when it's positioned between two existing structures that are still being occupied.

“You can't just get on a machine and think you're an operator and can do this,” he said. “When you're pulling a wall over, you need to grab the whole wall and take the whole wall with you, or that wall is going the other way.”

Caravella's company does full-service demolition with a process that has been refined to near perfection.

“We knock down the structure, clean up all the demo, sweep the basement and get all the wood,” he explained. “It only takes me 20 to 25 minutes to knock the house down. We'll load our dump trailers and use trucks to transport the trailers to a sanitary landfill. Then we'll put the bucket on the Doosan excavator and we'll dig it all out. We'll bust up the basements, and we'll get three or four loads of concrete. I usually do a house in one day. I'm done seeding or laying sod by 2 or 3 p.m.”

A growing part of what Caravella does is recycling demolition waste. He said that part of the demolition process has really changed since he started knocking down homes in the 1980s. No longer does everything go into a roll-off container and then to a landfill. Caravella's company is doing its part to divert recycling materials to facilities where they can be processed and eventually reused.

“After we knock the structure down, we wet it and we separate as much as we can for recyclables,” he said. “We'll take the metal out, including copper, and we'll process it. Back in the '80s, we threw most of the stuff out. There was no separating of the wood.”

In 2016, Caravella purchased his first Doosan excavator — a DX350LC-5 — from Hoffman Equipment, the local Doosan equipment dealer serving Eastern New Jersey. A big part of his decision was based on his previous relationship with Hoffman Equipment sales specialist Ed Cilli. The two met when Caravella was doing some work for another demolition company in the area. Cilli came through when Caravella was in a pinch, and he never forgot about it. Since adding the DX350LC-5 to his fleet, Caravella has been very pleased with the machine and its performance.

“The DX350LC-5 is an all-purpose machine,” he said. “Plus, it's very maneuverable. I can put it at a residential or commercial jobsite because it's the perfect size for most of the jobs we do. It has a tremendous amount of power.

“I also like the rearview camera and good visibility from inside the cab when I'm backing up because I can look at the camera view on the display or look out the rearview window. When you don't have good visibility and you're in a piece of equipment like this, you can get yourself in some trouble.”

A few years ago, Caravella auditioned to appear on a television show called “Machines of Glory,” a program that aired on the Discovery Channel. Caravella said his company was selected from “millions” of entries to represent the east coast in a battle against a west coast company. It involved completing a variety of obstacles using construction equipment, and he competed with his brother and cousin, eventually winning the competition and netting $12,000 in prizes.

Following the appearance on the Discovery Channel, Caravella participated in a pilot for a production company. That's when he said Hoffman Equipment really stepped up and made a positive impression, providing equipment to help knock down a 750,000-sq.-ft. building in East Hanover.

“What Hoffman Equipment and Doosan did for me, I will never forget,” he said. “They brought me loaders, excavators and all types of equipment, and other companies didn't want to do that for me. Doosan did something very special for me. I'm a Doosan fan, and I will purchase Doosan equipment from here until I retire. My loyalty is with you till I die. All other companies can offer me $10 million in machines — I will say no.”

Following the TV success, Caravella whetted his appetite with a new medium — social media — and created his company's Facebook page. He admits he's not a computer guy, but he couldn't pass up the opportunity to promote his company on the popular social media platform. It's an ideal way for him to share videos and pictures from his projects, as well as generate new business opportunities from people who see his online activity and what his company is capable of doing, he said.

“I have two employees in the office, and they will publish a couple of pictures to tell our fans where we're working today,” he said. “If there's someone on Facebook that knows me, as far as needing a demolition job, I'm probably 99 percent getting that call.”

While Caravella may be using new media outlets to promote his business, one thing hasn't changed — his passion for knocking down buildings and doing it with durable construction equipment, especially his Doosan excavator.