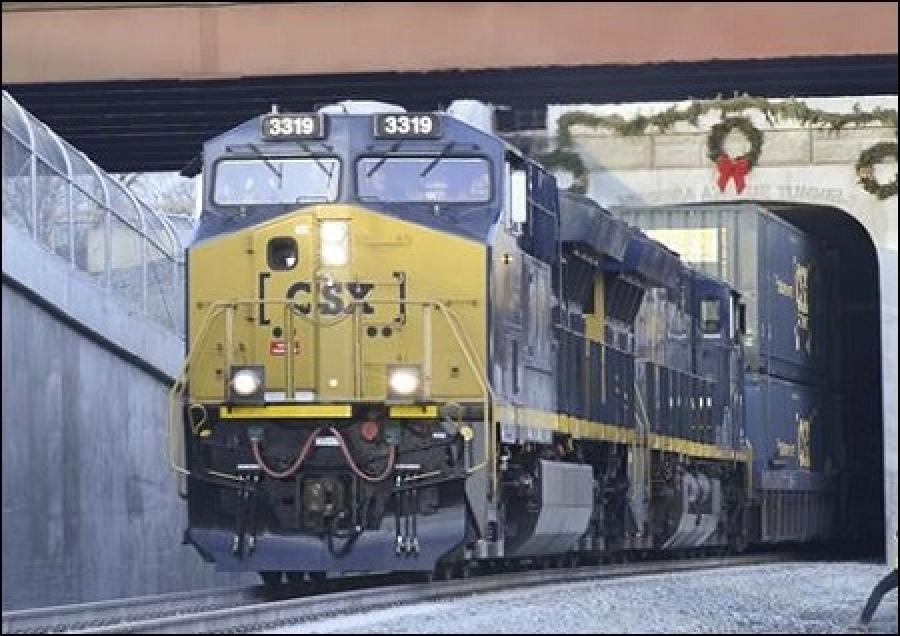 CSX said it moved the first double-stack train through the new tunnel on Dec. 23, hauling containers between Portsmouth, Va., and North Baltimore, Ohio.

When riders on the D.C.-area's Yellow Line subway come above ground for a track section that takes them over the Potomac River, they can now see CSX freight trains with cargo containers stacked two high on a heavy rail bridge nearby that also carries Amtrak and commuter trains.

Meanwhile, 200 mi. away at the CSX Transportation train yard in Portsmouth, Va. — near where giant containerships offload thousands of intermodal cargo-filled boxes at a time into the East Coast's rail and truck network — the Virginian-Pilot reported that a longstanding backlog of idled single-stack trains has been eliminated.

All of this is because CSX, in late December, was able to open the first of two new, double-stack tunnels in downtown Washington, D.C., to replace what had been a more than century-old tunnel that was too low to let trains carry more than one box high while its single track limited overall train traffic capacity.

That tunnel bottleneck had long restricted one of the nation's largest freight rail companies to hauling just single-stack loads in much of its system. Previously, the carrier would have to run longer trains, and often put trains into a queue, to keep containers flowing up or down the coast or into the nation's heartland.

That made customers either wait in line for freight-filled boxes to move later by train, or opt to put containers on the highways, one at a time, so that truck drivers could get them more quickly to destination.

But double-stacking means a train half the size can haul the same number, requiring fewer trains in queue and fewer locomotives and crew members. That cuts transportation costs even as it speeds rail deliveries, makes train hauls more competitive and keeps more container trucks off some of the busiest highways in the nation.

CSX began construction in the Virginia Avenue Tunnel project in May 2015. It is still more than a year away from completion of both tunnels, when it will be able to move trains in each direction at the same time. But getting through its first phase is already taking pressure off the rail and highway system for many hundreds of miles throughout the Eastern Seaboard and into the Midwest.

CSX said it moved the first double-stack train through the new tunnel on Dec. 23, hauling containers between Portsmouth, Va., and North Baltimore, Ohio, which is south of Toledo along Interstate 75.

Work on the adjacent tunnel has already begun, which includes demolition of the existing structure and building a new one, and CSX expects to finish the entire project on schedule in mid-2018.

“When both tunnels are complete,” CSX said, “the Virginia Avenue Tunnel project will relieve a significant mid-Atlantic rail bottleneck that impacts freight and passenger service in the region as the growing volume of rail traffic has consumed the capacity of the existing infrastructure.”

The rail company said the new tunnel is the latest in a series of projects to remove 61 height obstacles between its East Coast port facilities and its interior hub in Ohio. It has lumped them all under a broad, $850 million “National Gateway Initiative,” which it announced in 2008 as a public-private partnership.

While the company covered part of the costs, the initiative has also been supported, CSX said, by the District of Columbia, Maryland, North Carolina, Ohio, Pennsylvania, Virginia and West Virginia, including retailers and firms that rely heavily on containerized shipping for their supply chains. For just the Virginia Avenue Tunnel project, CSX covered most of the costs with a contribution from the state of Virginia.