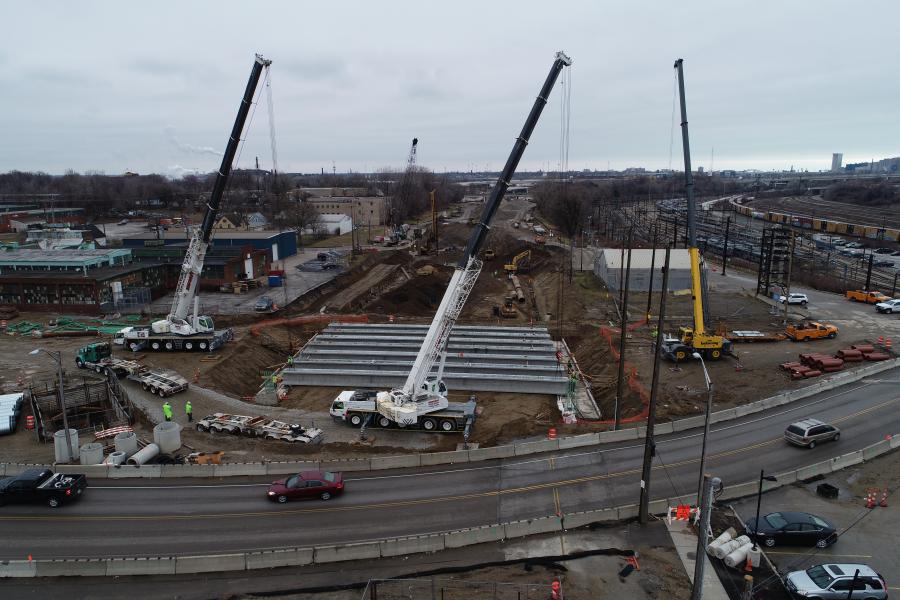 "The area on Cleveland's southeast side has become known as the ‘Forgotten Triangle', due to the lack of economic activity," said Amanda McFarland, Ohio Department of Transportation (ODOT) public information officer. "Outside of the transportation benefits it could bring to the Cleveland area, this effort opens the potential for new economic development, jobs and a new identity for the community. 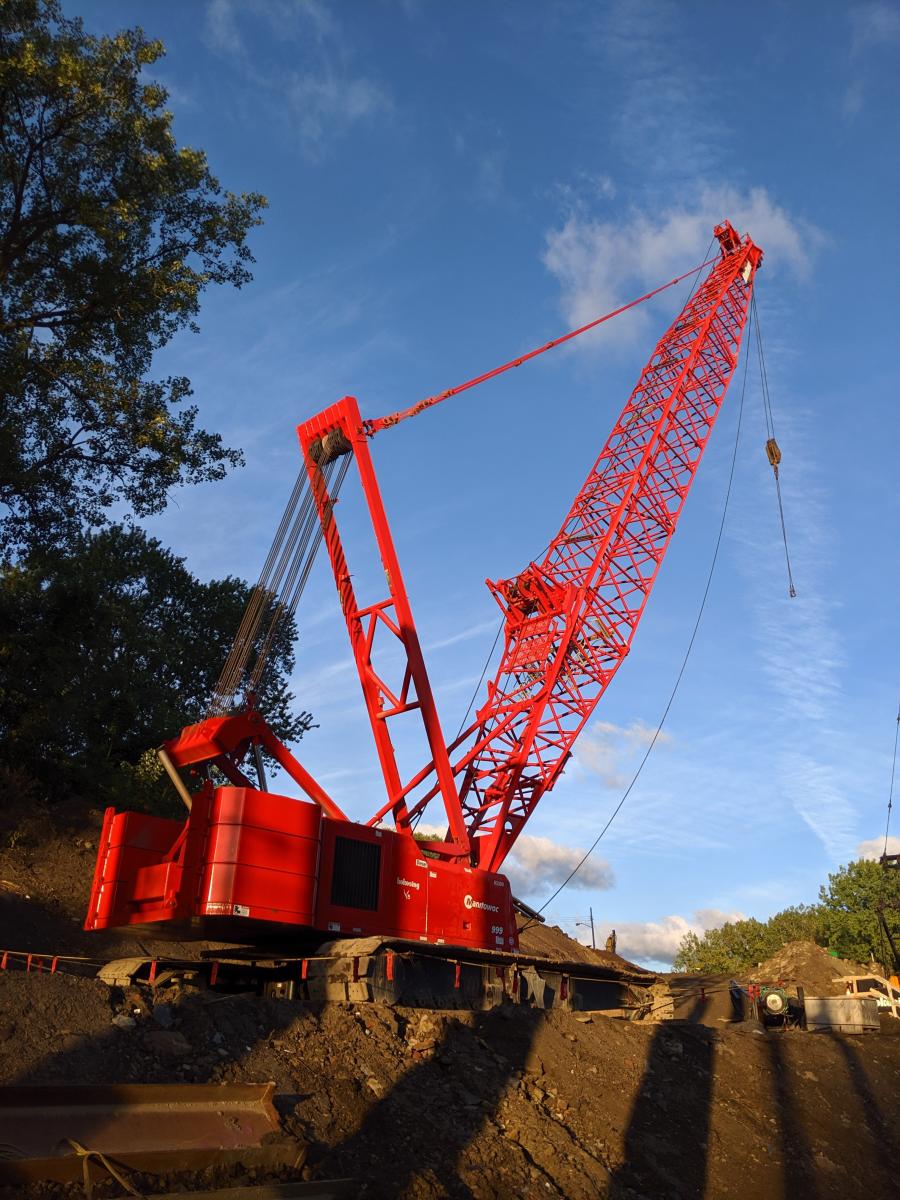 "Opportunity Corridor Boulevard will provide improved access to and through the communities of Slavic Village, Central, Kinsman, Buckeye-Shaker and Fairfax, as well as to the main campus of the Cleveland Clinic and the many businesses in University Circle. At the west, and busiest, end of the corridor, it's anticipated it will serve approximately 45,000 vehicles per day."

The Section 3 design-build contract was awarded to Kokosing Construction Company for roughly $151 million. The project has been more than a decade in the making, as ODOT and city officials worked together on plans and reached out to the public for input.

"In the beginning, some residents were upset, as the state needed to purchase properties and relocate residents and businesses in order to accommodate construction of the new boulevard," said McFarland. "Residents are interested to see the economic improvements this project will bring to their neighborhoods. ODOT has received positive feedback regarding the aesthetic treatments incorporated into the E.105th Street Bridge and the extensive tree plantings in the medians and tree lawns of Section 2. Similar bridge treatments and plantings are being incorporated into Section 3."

McFarland noted that drivers in the area are doing their best to cope with the ongoing work.

"We've heard very few complaints from motorists during construction. We began communicating about the I-490 closure six months in advance, did several television and radio interviews, placed hangers on residents' doors and placed billboards in the area to make sure everyone was aware of the closure and detour routes." 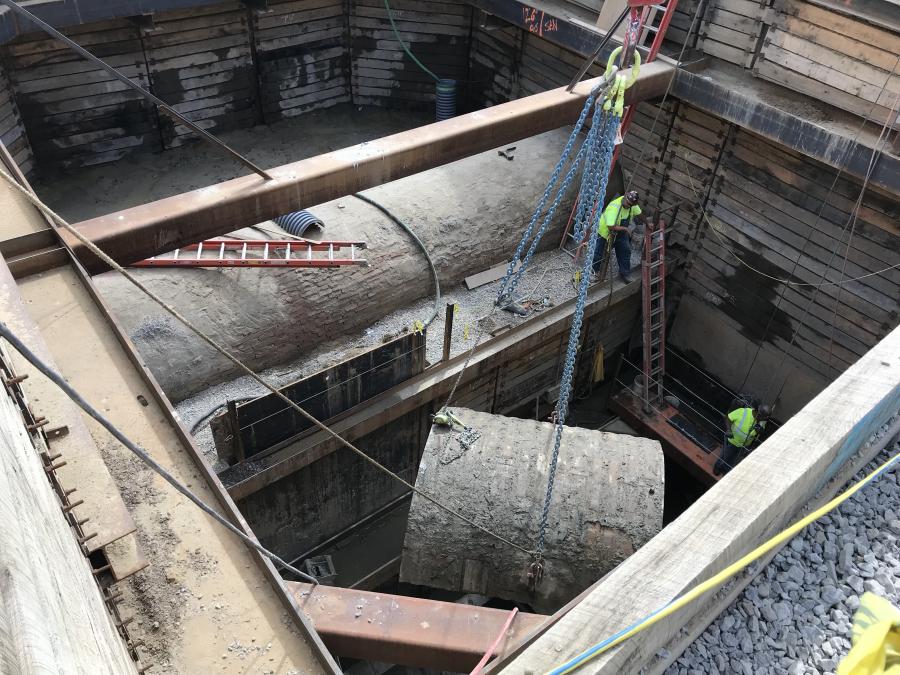 According to ODOT project engineer Mark Gabele, the work is progressing well.

"Much of the required utility relocations have been completed, all the required building demolitions are completed and work is under way throughout the OC Boulevard footprint. The project is currently working on several bridges simultaneously, E. 55th Street, E. 59th Street, Greater Cleveland Regional Transit Authority Blue/Green rail lines and Norfolk Southern railroad."

The biggest challenges on Section 3 work include significant excavation and embankment, which are weather-sensitive operations. Also, extensive utility relocations involve coordination with many different owners. Crews working over and under active railways, including GCRTA and Norfolk Southern, requires a great deal of planning and coordination, as well.

COVID-19 also has had an impact on the work. Material deliveries have been delayed and utility companies have reduced staff to complete their required work. In addition, remediating the environmental contamination from the properties that were acquired for the project has been a lengthy and expensive process. Designing and installing new infrastructure around the sometimes century-old infrastructure also has been challenging. The work includes water mains, power conduits, gas lines, communication networks, abandoned gas wells and previously demolished residential and commercial structures.

Currently, Section 3 work is taking place at the intersections of E. 75th Street, Buckeye Road, E. 79th Street, and Woodland Avenue, as well as construction of the boulevard between these intersections. The pedestrian bridges at E. 59th Street and E. 89th Street are under construction, along with sewer and embankment work at the site of the new bridges over Kingsbury Run. Crews continue to make progress at the E. 55th Street bridge and the bridge over the Greater Cleveland Regional Transit Authority (GCRTA) Blue and Green lines. 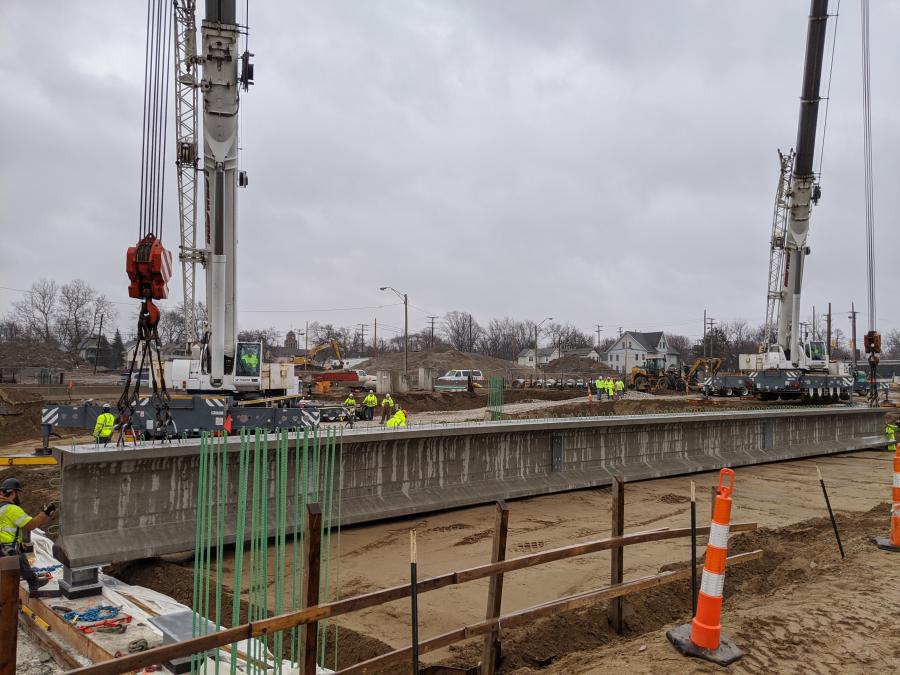 Regarding Section 3 bridge work, there are two vehicular bridges that will be constructed over the corridor: East 55th Street and Norfolk Southern Railroad track bridge. Three bridges will be constructed on the new corridor — two over the Greater Cleveland Regional Transit Authority (GCRTA) Blue and Green lines and one over Kingsbury Run. There are two pedestrian bridges that will be built, including East 59th Street and East 89th Street.

Gabele said the retaining walls are being constructed with a top-down construction approach. This is accomplished by first drilling and pouring the soldier pile support beams prior to excavating the area. This approach minimizes the disturbance of the adjacent properties and shortens the construction duration. This process also allowed the East 55th Street Bridge to be constructed prior to the mass excavation at the intersection of I-490.

According to ODOT project engineer Kevin Kuntz, there was extensive planning and coordination to assure that the soldier pile walls were being constructed at the proper grade.

"A double casing method was utilized on most piles to assure proper beam embedment, concrete placement, prevent groundwater infiltration and assure hole stability. Above the concrete was filled with low strength mortar [LSM] that will be partially removed during the top down timber lagging procedure.

On I-490, approximately 450,000 cu. yds. of dirt have been excavated. This has involved mostly sand and silt. As for the excavation of concrete on the closed section of I-490 to accommodate the lowering of I-490/Opportunity Corridor Blvd. (OC Blvd.) to pass under East 55th Street, the concrete removed here was broken with a pavement breaker, crushed, screened and recycled on site to be used on other projects. 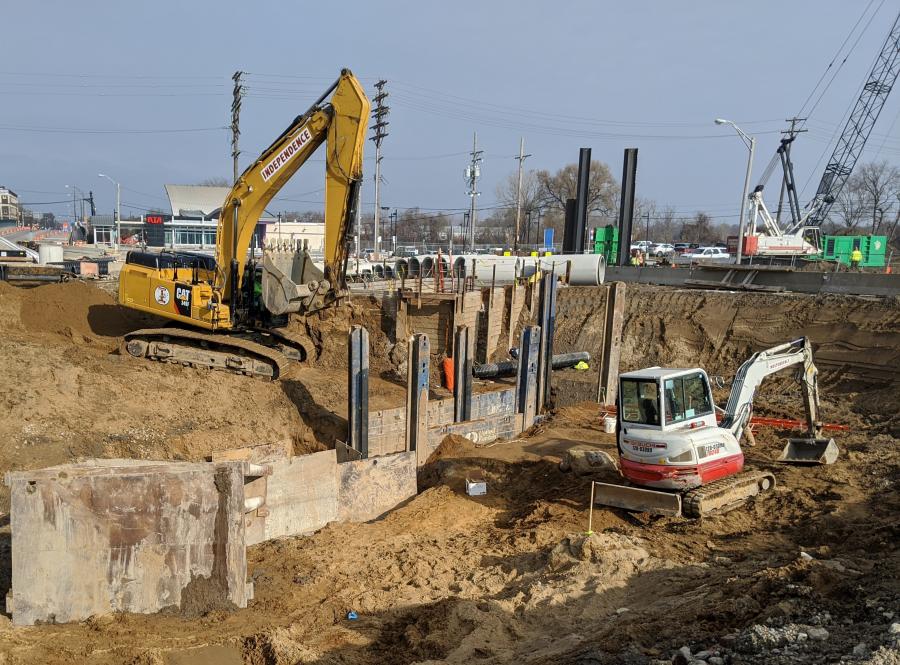 Primary materials required include concrete, asphalt and aggregate. The proposed roadway consists of 12 in. of asphalt on top of an aggregate base. The bridge substructures are constructed with concrete, and the beams are a combination of concrete or steel beams.

The most time-consuming part of the assignment involves the construction of the Norfolk and Southern Overpass bridge. This is required to be built in three phases, with tracks relocations in each. The track relocations require work and coordination by both the design build team and NS.

The large embankment being constructed in the Kingsbury Run Valley will require stage construction with two settlement periods before the bridge footers can be constructed. This work is weather sensitive and can't be completed during the winter or wet times.

As for construction milestones, the East 55th Street bridge is expected to be completed this summer. Also, the placement of NS tracks onto the new overpass bridge will take place before the end of 2020, which is critical to keeping the project on schedule. Also key is the completion of the reconstruction of the intersections of East 55th Street, Kinsman Road, E 75th Street, E 79th Street, Buckeye Road, and Woodland Avenue with the new OC Boulevard alignment.

McFarland said throughout all sections of construction on the Opportunity Corridor project, ODOT has been committed to diversity and inclusion. 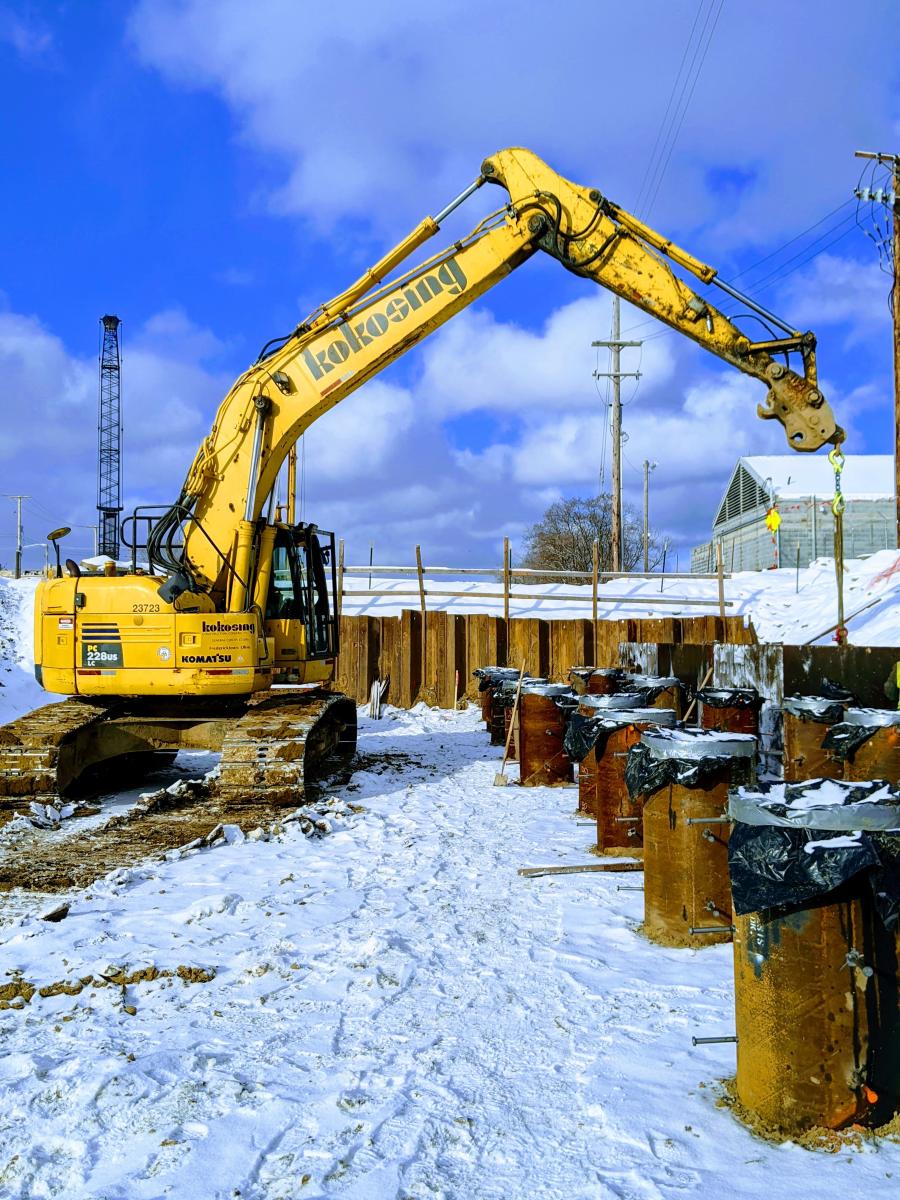 "The contractors on Sections 1 and 2 exceeded their sub-contracting and on-the-job training goals. Kokosing Construction Company has committed 29.8 percent of the total contract value will be work performed by new, small, local and EDGE-certified companies. The project goal is 20 percent.

"Workforce development also is a part of this project, which includes helping those in the community seeking employment by providing them with working with them on finding a career that interests them, applying for jobs, interviewing for jobs and more. These sessions are offered free of charge."

McFarland added that the new roadway will improve access within the area for various modes of transportation, including vehicles, bicycles and pedestrians. The new bridges over the Kingsbury Run Valley and under Norfolk Southern will greatly improve bicycle and pedestrian access to and from the GCRTA train stations at East 55th Street and E79th Street.

"It's extremely rewarding to have the construction of the first two phases of the corridor completed. As construction proceeds on the final phase, everyone is excited to see how the completion of the entire corridor brings much needed transformation to the adjoining neighborhoods." CEG