The reconstruction, funded with state and local money, has crews working between Portage Lake Lift Bridge and Lincoln Drive. 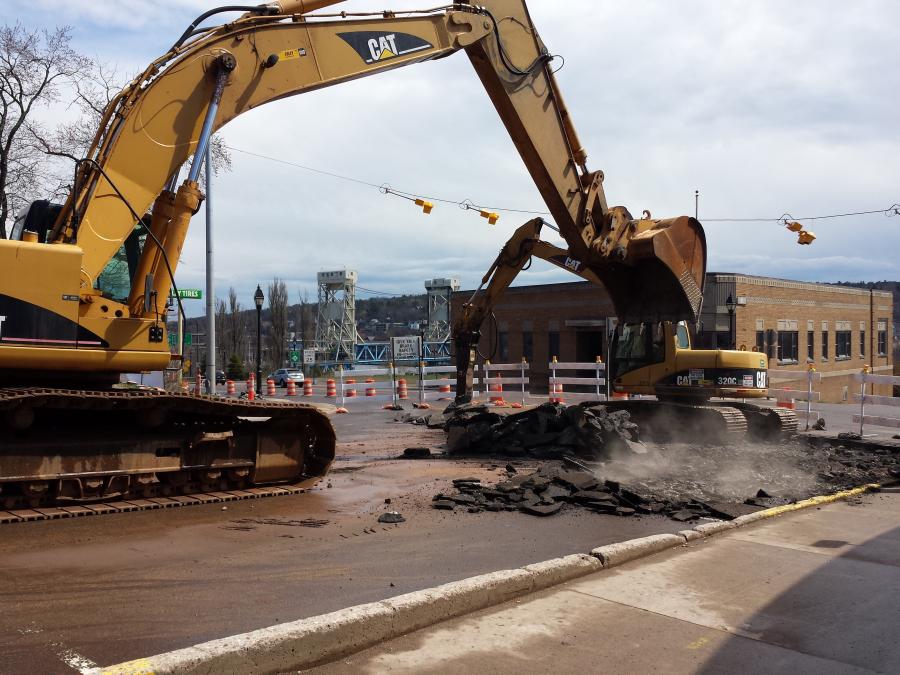 The Hebert Construction Co. is reconstructing a portion of U.S. 41 (Reservation and Quincy streets) in the city of Hancock (Houghton County) in northern Michigan for the Michigan Department of Transportation (MDOT).

The Hebert Construction Co. is reconstructing a portion of U.S. 41 (Reservation and Quincy streets) in the city of Hancock (Houghton County) in northern Michigan for the Michigan Department of Transportation (MDOT). The $7.1 million Hancock Streetscape Project, which began on May 2 will be completed in July 2017.

The project includes the removal and replacement of the existing roadway with drainage improvements, along with decorative street lighting, curb bump-outs and landscape plantings. The city is taking advantage of the MDOT project to effect water main and sanitary sewer improvements on Quincy Street, a contract also awarded to Hebert Construction.

“This project will improve pavement condition and address historic concerns with non-motorized traffic in downtown Hancock,” said Dan Weingarten, communications representative, MDOT Superior region. “MDOT had a number of meetings with the city and pedestrian groups to gather input. By adding sidewalk bump-outs, the project will address concerns from pedestrians who've had difficulty crossing U.S. 41. Beyond the safety improvements, the project will give a nice aesthetic update for downtown Hancock.”

This section of U.S.-41 has not undergone major reconstruction in many years and MDOT was not getting the expected pavement life from mill and resurfacing maintenance fixes. The new stretch of road has an anticipated fix life of 20 years. The work on U.S. 41 is taking place in 2016, while the work on Front Street and the M-26 ramp is scheduled for 2017.

“Tezcuco Street will remain open to traffic for as long as possible,” according to the web page. Local traffic will be permitted on Quincy Street, with total closures of Quincy Street in the work area during various stages of construction The project will require a detour, with two-way traffic on Hancock Street. Motorists should expect a significant increase in traffic on Hancock Street. To maintain access to businesses, local traffic will be permitted on Quincy Street in the areas outside the active stage. Pedestrian access will be maintained throughout the project.”

MDOT held an information meeting on April 5 with town residents. About 80 people attended.

“The public comments were overwhelmingly positive,” said Weingarten. “People are understandably concerned with traffic impacts during construction, but everyone seems to be looking forward to the project.”

Donald Hebert, the owner and president of Hebert Construction, said that his company worked on a similar urban project last year in the city of Iron Wood.

“The biggest things that makes these projects a success is cooperation and coordination — everybody has to be involved,” he said. “We have weekly meetings to discuss the progress. They allow us to suggest alternatives to do the project in a better and more efficient way. You also need to have good weather. Right now we're in the initial stages of the work, but the project is moving forward and we're ready for the challenge.”

The project superintendent is Patrick Hebert, who also is responsible for the company's vehicles and equipment. Donald Hebert has been involved in the project from the start, particularly in the bidding process.

“We just tore up Reservation Street and put in the temporary water and other services for the building along the work site so that they will not experience any interruptions,” said Hebert. “We did the work on the west end to divert the traffic, which is flowing well. We'll be tearing up Quincy and continuing down Hancock Street. When we remove the sidewalks, there will be a place for foot traffic to walk safely as we are working. Throughout the phases that have been set up, there will be no truck or car traffic as they are being diverted to side streets.”

When the asphalt and concrete is removed, the underground work can begin. But knowing that some underground infrastructure may not be found on the maps, Hebert crews will proceed cautiously.

The Reservation/Quincy section is to be completed in 2016. In 2017, Highway 26 will be revamped, along with the tie-ins. The project is divided into nine stages.

The immediate work is bringing in several subcontractors, which includes the new electrical infrastructure that has to be installed, requiring the removal of the sidewalks. A full crew of 25 to 30 people should be on site in a few weeks.

The project's progress is dependent upon sequencing starting with the removal of the road surface to build a new roadbase and the installation of new underground service before a new road and sidewalk system can be constructed.

“Once you start,” said Hebert, “you want to keep the production going. With the phasing, MDOT wants certain areas done before you can start the next one. We're going to discuss the possibility MDOT giving us more areas to work in so that we can have all the different operations to keep on working instead of having to stop and wait for others to complete their work.

“It's not like you can turn off an operation and turn it back on with a light switch,” he added. “If we can change the phasing, we can get the work done sooner for the community.”

Most of the equipment for the project has been sent to the project — Hebert's main office/yard is 100 miles away in Iron River.

A dozer has been fitted with a GPS unit to spread gravel and other materials precisely and make cuts on the subgrade. A grader has been similarly outfitted.

“We are using the latest technology,” said Hebert, who has witnessed the evolution of construction equipment.

The company will be sending in mechanics as needed. Minor repairs and other servicing are often done by operators, but major repairs and routine maintenance is handled by mechanics from the shop.