The Grundocrack Pneumatic Pipe Bursting System is typically used where existing underground utility pipes have failed beyond the point of repair. The existing pipe must be fracturable if this system is to be used.

The family-run company has a long history of success — 120 years. Its areas of expertise are extremely diverse, including site construction, demolition, heavy highway and utility infrastructure work that includes construction and repairs of water, sewer and electric.

To meet the needs of its diversity Brennan has an extremely large and varied equipment fleet, giving it the ability to quickly respond as needs arise, particularly as it relates to its utility work and the capability to immediately respond to emergency calls.

"One of the keys to surviving 120 years is surrounding yourself with highly skilled people and creating a good work environment," said David Brennan, president. "From our highly-qualified management through our field administrative staff there is a great deal of pride in working for our company as is evidenced by the average employee tenure of 10 years, with many employees approaching 30 years. 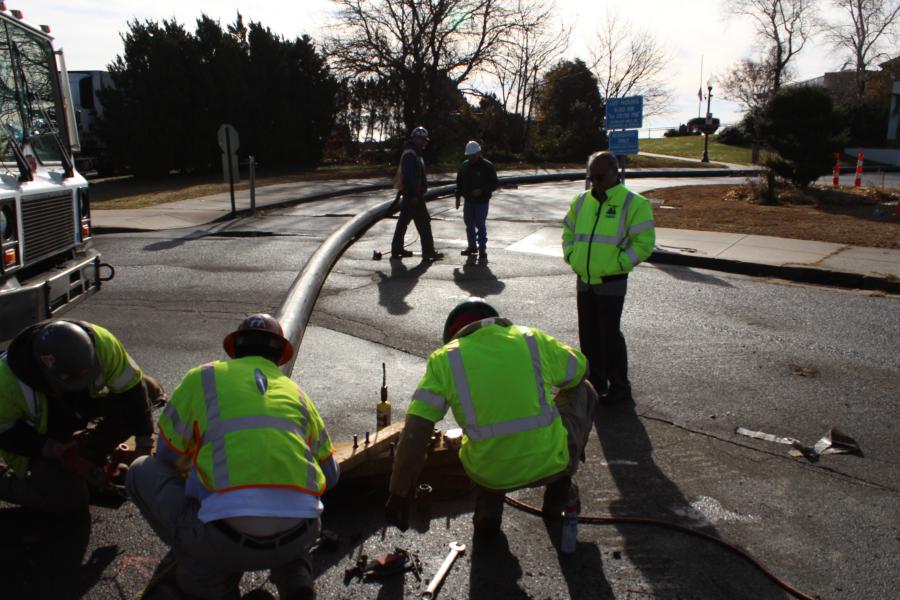 "At Brennan, we have an innovative mindset and our leaders embrace new technology to give our customers the best value and performance possible. Construction is an ever-evolving industry and our experience with new technology demonstrates our understanding of the necessity to grow into new areas and implementing the latest equipment and techniques available."

In keeping with Brennan's commitment to innovative solutions, over the past decade the company has made a significant investment in pneumatic pipe bursting equipment used to replace existing underground utility lines. 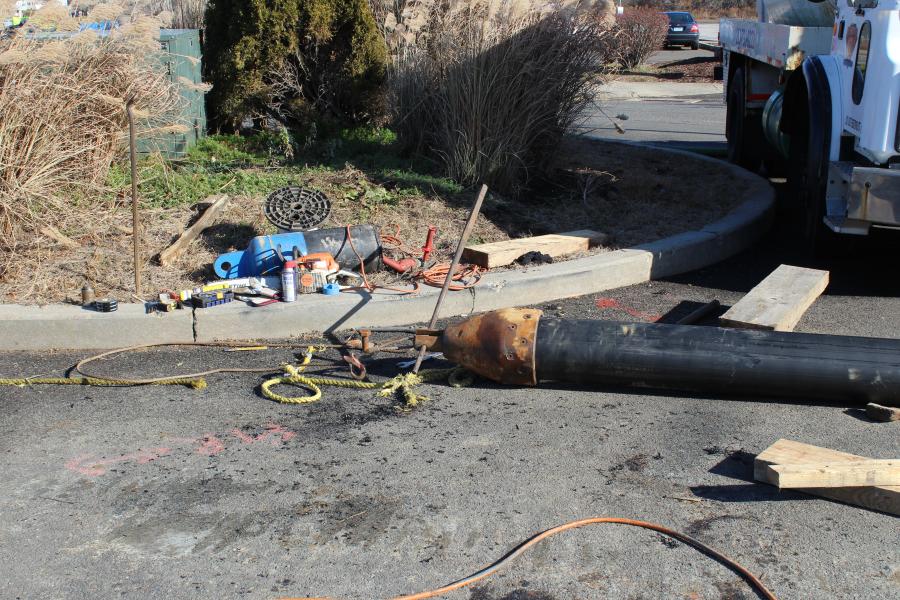 Grundocrack Pneumatic Pipe Bursting is a method that has been developed by T.T. Technologies Inc. Simply put, pipe bursting allows the replacement of cast iron, clay, concrete and other fracturable pipes with a new line of the same or larger diameter with very little or, in some cases, no excavation or disruption to the environment surrounding the pipe.

The Grundocrack Pneumatic Pipe Bursting System is typically used where existing underground utility pipes have failed beyond the point of repair. The existing pipe must be fracturable if this system is to be used.

The Grundocrack is attached to the new replacement pipe near an entry point to the existing damaged pipe. This would typically be a pit or manhole. A cable that is connected to a winch, which is based at the exit point of the pipe replacement, is attached to the head of the Grundocrack. This cable is snaked through the existing pipe and it will be used as a guide for the Grundocrack as it breaks the existing pipe and places the new pipe in the same location. The cable is only a guide; continuous percussion from the pneumatic tool (Grundocrack) actually fractures the host pipe. 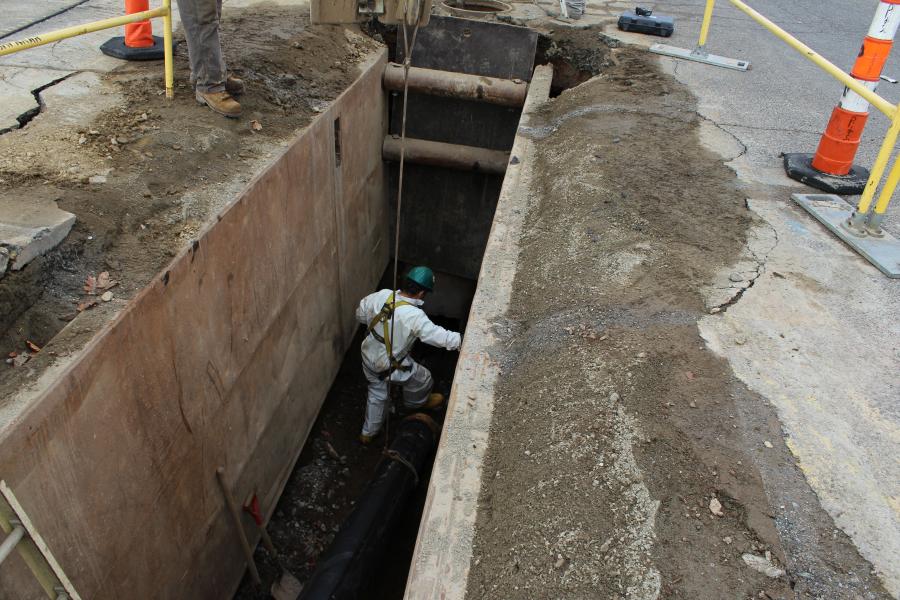 The Grundocrack pipe bursting system effectively hammers its way through the host pipe, displacing the remnants into the surrounding soil while simultaneously putting the new pipe into place behind it. Typically, the new pipe is constructed of high-density polyurethane (HDPE). An additional benefit to pipe bursting is that it is the only trenchless method of pipe rehabilitation and replacement that allows for upsizing of the original pipe.

Earlier this year, John J. Brennan Construction's pipe bursting expertise was called upon by the city of West Haven, Conn.

West Haven was experiencing a serious problem with a damaged section of sanitary sewer underground pipe (located 15 ft. below the surface) near Savin Rock, an old amusement park along the city's beach. This particular job called for the replacement with 200 ft. of 12-in. HDPE fusable pipe.

"The diameter of the pipe did not present any particular issue to us," said Nick Teodosio, general superintendent of John J. Brennan's water and sewer operations. "Using this method, we have been able to replace pipes of up to 4-foot in diameter and regardless of the size of the pipe, the old pipe is simply displaced into the soil surrounding it."

In this particular job, the big advantage was the very limited disruption to traffic. 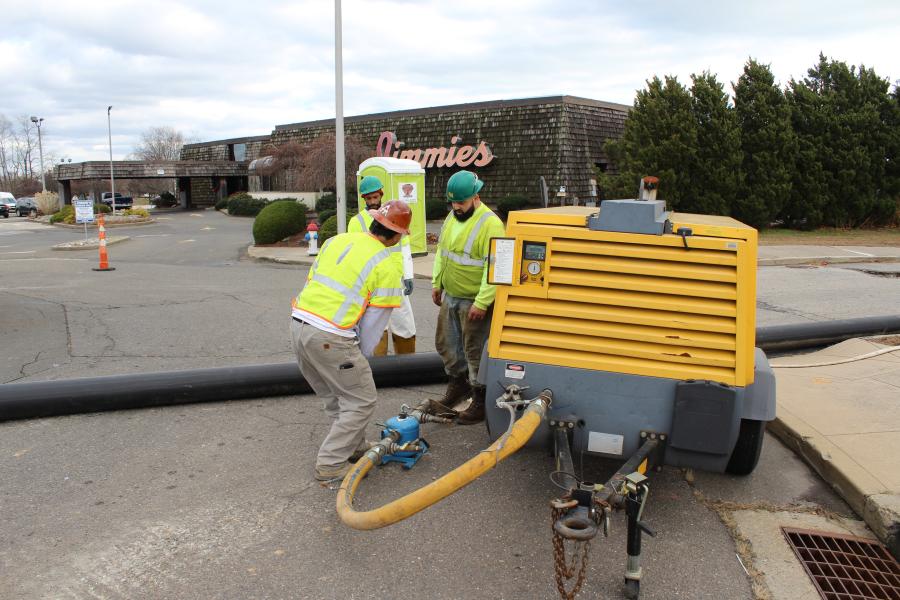 "Using traditional methodology, we would have been excavating most of the road surface, directing traffic around the area until the excavation and pipe replacement was complete, and then there would have been another disruption of traffic while the surface is repaved," Teodosio said. "That's just one advantage to this system. For us, another big advantage is that you use a significantly smaller crew to complete the task. For the customer, another advantage is that any time you have to repave a cut of excavated asphalt, you run a significant risk of road settlement. This job was let on an emergency basis. With the 15-foot depth and 200-foot run, the entire street would have been shut down for multiple weeks. We were in and out in a day. Not only did this save on the construction costs, but the city would have had to pay for police protection on the site during the entire project."

Important to note is that the winch pulling the cable is not what is powering this operation; rather, it is simply a guide for the Grundocrack. The horsepower for the operation is generated by 100 psi air power. Before the pipe is pulled, underground sections are marked off on the new pipe in 20-ft. segments. This ensures that in the unlikely occurrence of the Grundocrack getting hung up underground, the crew can know exactly where the pipe is located.

During the installation process, the pneumatic power from the connected air compressor has the Grundocrack constantly pounding and it is creating a path that is 1.5 in. larger in diameter than the existing pipe. The compressor needs to be a significant size machine creating a minimum of 300 cu. ft. lbs. of compression.

Once the Grundocrack reaches its destination, the head, which is larger than the diameter of the pipe, is removed. The new pipe is connected and the construction is essentially complete.