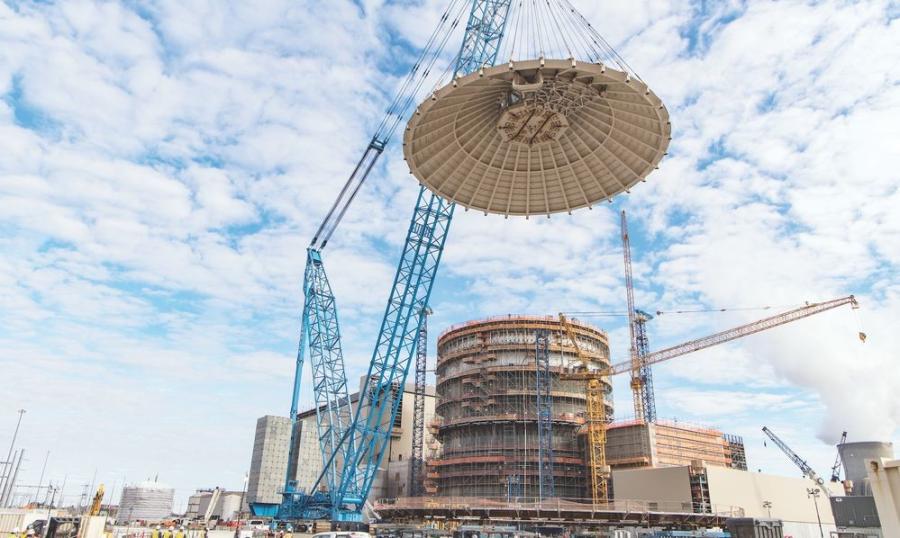 Weighing in at 2 million pounds, the roof of Unit 3’s shield building is lifted into place.

Construction is ongoing for two new nuclear reactors, Units 3 and 4, at Georgia Power's Alvin W. Vogtle Electric Generating Plant in Waynesboro, Ga. — the first new nuclear reactors to be constructed in the United Stated in 30 years — that will provide electricity to more than 500,000 homes and businesses once operational.

Construction on Unit 3 started in March 2013 with an expected completion date of November 2021. For Unit 4, work began in November 2013 with a targeted delivery date of November 2022. Each unit houses a Westinghouse AP1000 (Advanced Passive) nuclear reactor that can generate about 1,117 megawatts (MWe). The reactor pressure vessels and steam generators are from Doosan, a South Korean firm. 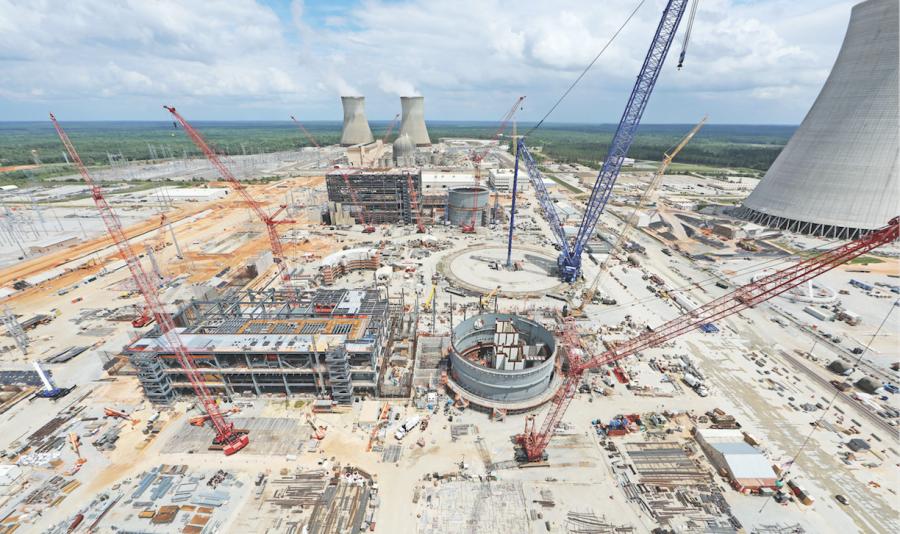 The pouring of concrete was delayed to 2013 due to the United States Nuclear Regulatory Commission issuing a license amendment which permitted the use of higher-strength concrete for the foundations of the reactors, eliminating the need to make additional modifications to reinforcing steel bar.

The work is occurring in the middle of an operational nuclear facility, and the construction area contains many cranes and storage areas for the prefabricated parts being installed. Space also is needed for various trucks making deliveries, especially concrete.

The reactor buildings, circular in shape, are several hundred feet apart from one another and each one has an annex building and a turbine island structure. The estimated total price for the project is expected in the $18.7 billion range. Bechtel Corporation, which built Units 1 and 2, was brought in January 2017 to take over the construction that is being overseen by Southern Nuclear Operating Company (SNOC), which operates the plant.

The project will require the equivalent of 3,375 miles of sidewalk; the towers for Units 3 and 4 are 60 stories high and have two million pound CA modules; the office space for both units is 300,000 sq. ft.; and there are more than 8,000 construction workers — over 30 percent being military veterans. The new reactors will create 800 permanent jobs.

Southern Nuclear and Georgia Power took over management of the construction project in 2017 after Westinghouse's Chapter 11 bankruptcy. The plant, built in the late 1980s with Unit 1 becoming operational in 1987 and Unit 2 in 1989, is jointly owned by Georgia Power (45.7 percent), Oglethorpe Power Corporation (30 percent), Municipal Electric Authority of Georgia (22.7 percent) and Dalton Utilities (1.6 percent). 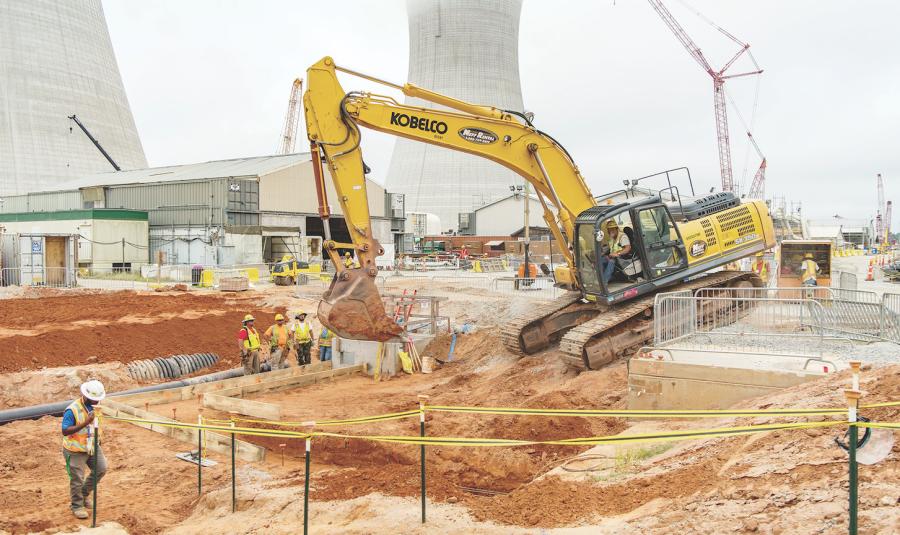 "Significant progress has been made on the construction of Vogtle 3 and 4 since the transition to Southern Nuclear following the Westinghouse bankruptcy," said Paul Bowers, Chairman, President and CEO of Georgia Power. "While there will always be challenges in building the first new nuclear units in this country in more than 30 years, we remain focused on reducing project risk and maintaining the current project momentum in order to provide our customers with a new carbon-free energy source that will put downward pressure on rates for 60 to 80 years."

The Vogtle and Hatch nuclear plants currently provide more than 20 percent of Georgia's annual electricity needs. Vogtle will be the only four-unit nuclear facility in the country. The energy is needed to meet the rising demand for electricity as the state expects to have more than four million new residents by 2030.

The plant's expansion is the largest ongoing construction project in Georgia and one of the largest in the state's history. Last March an agreement was signed to secure approximately $1.67 billion in additional Department of Energy loan guarantees. Georgia Power previously secured loan guarantees of $3.46 billion.

The signing highlighted the placement of the top of the containment vessel for Unit 3, which signified that all modules and large components had been placed inside it. The containment vessel is a high-integrity steel structure that houses critical plant components. The top head is 130 ft. in diameter, 37 ft. tall, and weighs nearly 1.5 million lbs. It is comprised of 58 large plates, welded together with each more than 1.5 in. thick.

"From the very beginning, public and private partners have stood with us," said Southern Company Chairman, President and CEO Tom Fanning. "Everyone involved in the project remains focused on sustaining our momentum." 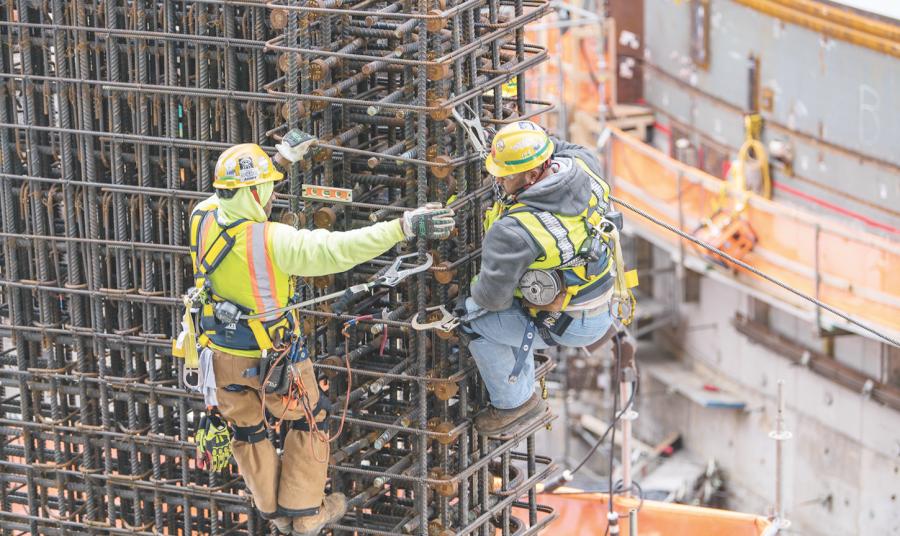 Bechtel has completed more than 80 percent of the project, and the major milestones for 2019 have been met — including setting the Unit 4 pressurizer inside the containment vessel last February, which will provide pressure control inside the reactor coolant system. More specialized construction workers, including craft labor, have been hired via the addition of approximately 300 pipefitters and 350 electricians since November 2018. Another 500 to 1,000 craft workers have been more recently brought in.

Progress also has been solid for Unit 3. Last January the integrated head package (IHP) was set inside the containment vessel. The IHP, weighing 475,000 lbs. and standing 48 ft. tall, combines several separate components in one assembly and allows the rapid removal of the reactor vessel head during a refueling outage. One month earlier, the placement of the third and final ring for containment vessel, and the placement of the fourth and final reactor coolant pump (RCP, 375,000 lbs.), were executed.

"Weighing just under 2 million pounds, approximately 38 feet high and with a diameter of 130 feet, the ring is the fourth of five sections that make up the containment vessel," stated a Georgia Power press release. "The RCPs are mounted to the steam generator and serve a critical part of the reactor coolant system, circulating water from the steam generator to the reactor vessel, allowing sufficient heat transfer for safe plant operation. In the same month, the Unit 3 shield building with additional double-decker panels, was placed.

According to a construction update from Georgia Power, a total of eight six-panel sections have been placed, with each one measuring 20 ft. tall and 114 ft. wide, weighing up to 300,000 lbs. To date, more than half of the shield building panels have been placed for Unit 3. The shield building panels, fabricated in Newport News, Va., provide structural support to the containment cooling water supply and protect the containment vessel, which houses the reactor vessel. 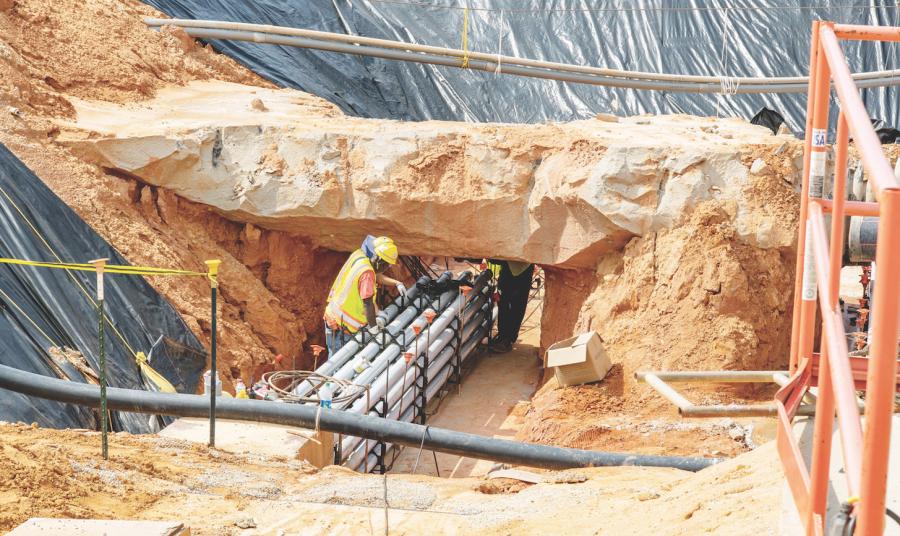 Building the reactors is challenging due to the design. Unit 3 will have 157 fuel assemblies, with each being a little over 14 ft. long. They are crucial to fuelling the reactor, and once the initial fueling is completed, nearly one-third of the fuel assemblies will be replaced for each re-fuelling operation. In addition to the Unit 3 containment top, placement crews installed three low-pressure turbine rotors and the generator rotor inside the unit's turbine building.

Last November, major systems testing got underway at Unit 3 as the site continues to transition from construction toward system operations. The Open Vessel Testing will demonstrate how water flows from the key safety systems into the reactor vessel ensuring the paths are not blocked or constricted.

"This is a significant step on our path towards operations," said Glen Chick, Vogtle 3 & 4 construction executive vice president. "[This] will prepare the unit for cold hydro testing and hot functional testing next year — both critical tests required ahead of initial fuel load."

It also confirms that the pumps, motors, valves, pipes and other components function as designed.

"It follows the Integrated Flush process, which began in August, to push water through system piping and mechanical components that feed into the Unit 3 reactor vessel and reactor coolant loops for the first time," stated a press release. "Significant progress continues ... including the placement of the final reinforced concrete portion of the Unit 4 shield building. The 148-cubic yard placement took eight hours to complete and, once cured, allows for the placement of the first course of double-decker panels. Also, the upper inner casing for the Unit 3 high-pressure turbine has been placed, signifying the completion of the centerline alignment, which will mean minimal vibration and less stress on the rotors during operations, resulting in more efficient power generation."

The turbine rotors, each weighing approximately 200 tons and rotating at 1,800 revolutions per-minute, pass steam through the turbine blades to power the generator.

The placement of the middle containment vessel ring for Unit 4 was completed in early July. This required several cranes to work in tandem as the 51-ft. tall ring weighed 2.4 million lbs. and had dozens of individual steel plates that were fabricated on site.

A key part of the construction progress was made in late July with the order of the first nuclear fuel load for Unit 3, which consists of 157 fuel assemblies with each measuring 14 ft. tall.

On May 7, Unit 3 was energized (permanently powered), which was essential to perform the testing for the unit. Prior to this, the plant equipment had been running on temporary construction power.

"[This] is a major first step in transitioning the project from construction toward system operations," Chick said. 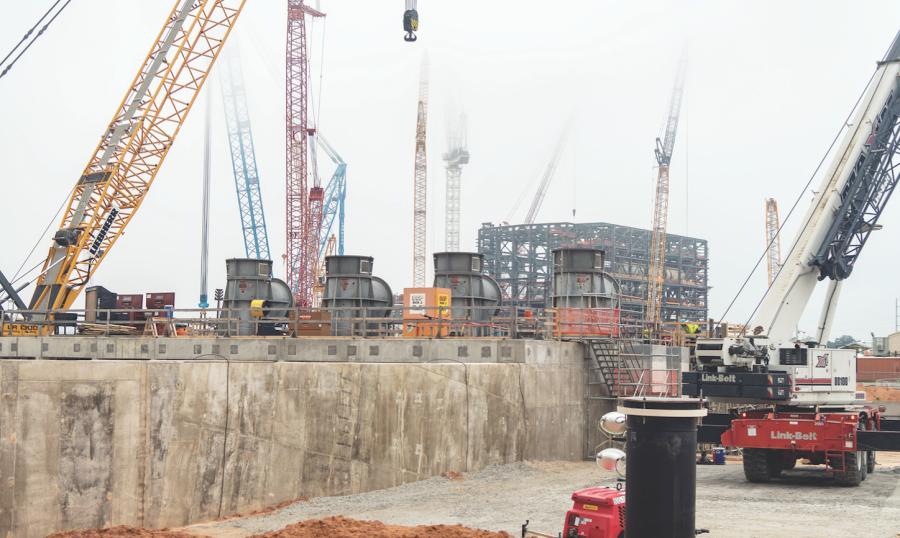 Construction of the north side of the Unit 3 Auxiliary Building (AB) has progressed with both the floor and roof modules being set. Substantial work also occurred on the steel and concrete that forms the remaining walls and the north AB roof at elevation.

"The south side of the AB has also shown significant progress," noted the Twentieth/Twenty-first Semi-annual Vogtle Construction Monitoring Report. "Several wall and floor concrete placements inside and around the Spent Fuel area were completed to form the Spent Fuel Pool, New Fuel Storage Pit, Cask Loading Pit and Cask Washdown Pit. Throughout the AB, system commodities such as small-bore piping, conduit and cable continue to be installed in order to support the upcoming system turnovers required for the Integrated Flush and Open Vessel testing."

Work inside the containment continues to focus on installation of piping, cable, and equipment at all elevations in support of system turnovers and for completion of all stairs and platform modules above the Operating Deck. In the AB, the placement of steel and concrete continues toward the roof elevation on the north side.

Due to the nature of the plant, construction operations are complex and inspections are rigorous. Between July 1, 2018 and June 30, 2019 approximately 19.8 million man-hours were performed on construction, testing, and the startup for both units.

"In November 2018, after more than 60 million hours, the project experienced its first lost-time incident," stated the monitoring report. "The event reset the clock on lost-time incidents, a mark that began in December 2014. SNC and contractor leadership utilized the opportunity to re-emphasize the importance of and to encourage renewed focus on safety. Site leadership continues to evaluate opportunities to enhance and cultivate a culture that promotes safety first. Since that incident, approximately 15.6 million man-hours have been performed safely with no additional lost-time injuries."

Bechtel has hired many regional and local subcontractors, and there are several concrete batch plants onsite.

Equipment on site includes various types and sizes of cranes, excavators, dozers, loaders, ready mix trucks, manlifts and other equipment for close-in operations to move materials around the site. With tight schedules to meet, onsite mechanics are on hand to execute rapid repairs. CEG