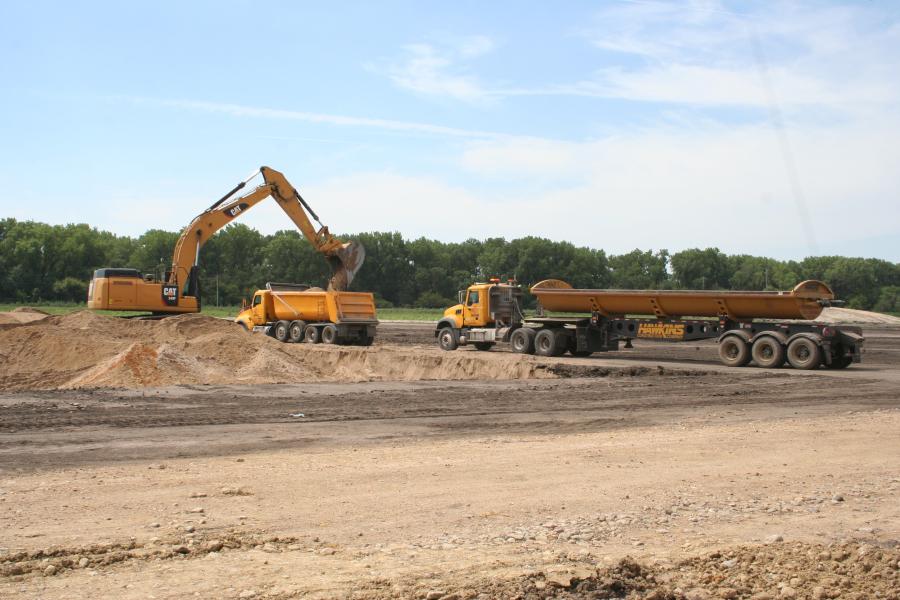 The Nebraska Department of Transportation, via the Build Nebraska Act, is spending close to $170 million to convert roughly 26 mi. of U.S. Highway 30 (U.S. 30) between Schuyler and Fremont in Dodge and Colfax County from a two-lane road into a four-lane expressway.

The Nebraska Department of Transportation, via the Build Nebraska Act, is spending close to $170 million to convert roughly 26 mi. of U.S. Highway 30 (U.S. 30) between Schuyler and Fremont in Dodge and Colfax County from a two-lane road into a four-lane expressway on new alignment that in places is 1.5 to 2 mi. north of the existing U.S. 30 alignment.

The project is being constructed in three phases —Schuyler to Rogers, Rogers to North Bend and North Bend to Fremont.

The Hawkins Construction Company is working on the first phase and prior to the winter shutdown, the company had completed half of the project ahead of schedule.

According to the project web page, U.S. 30 is a key piece in the northeast Nebraska roadway system and connects key urban centers, with Fremont and Columbus being the 6th and 10th largest cities in the state. U.S. 30 is part of Nebraska's Priority Commercial System that carries higher traffic volumes, especially commercial vehicles.

The work began roughly at 2.45 mi. east of Schuyler and will extend east, ending approximately a half mi. west of the U.S. 30 /U.S. Highway 77 interchange, just north of Fremont.

Once built, the new expressway will have surfaced shoulders and a 40-ft. depressed grassed median; new drainage structures, including culverts and bridges as needed; and will involve grading along the entire project length, which involves the reconstruction of connecting county roads, intersections and private driveways.

Input from local residents and businesses are very important to the success of this project. Nebraska DOT continues communication efforts with the communities along the project during active construction to ensure the public is aware of what's going on around them or answer any questions they may have.

“We've had great attendance and received helpful input from the communities as the projects have progressed.” said Jeni Campana, Nebraska DOT communications.

Traffic disruptions are expected to be minimal.

Since the project consists primarily of new alignment, accrording to the web page, traffic would be maintained on existing U.S. 30 during construction with temporary surfacing and short-term detours likely required when the new alignment is connected to existing roadways. The proposed construction would require detouring county roads. Access to adjacent properties would be maintained during construction, but may be limited at times due to phasing requirements.

Tom Crockett, vice president of Hawkins Construction, noted that his company did some initial work on the project in October 2016 with clearing and grubbing operations and went into full-swing last spring. The project is expected to be completed in late fall 2018.

“The westbound lanes are mostly completed,” he said. “We are ahead of schedule — we're 54 percent complete and used 41 percent of the days. We have a good group of guys that stay after it.”

The crews include paving, grading, and those setting up the paving areas.

Soil conditions have posed some challenges.

“You're working in the Platte River Valley,” said Crockett, “so you have challenging soil conditions. We also had an extremely wet spring, but we were able to navigate through all of that to get to the point where we are now. We overcame the challenges with a lot of extra hours and we had to be very cognizant of the earth fill material we were working with and the different types of soils. We employed different means and methods on the processing of those soils.”

The construction plan had Hawkins crews build the two new lanes of westbound pavement so that traffic could be switched from the original road to allow for existing pavement removals and grading of the new eastbound lanes.

“The guys are experienced and they know how to handle the varying conditions,” said Crockett, who added that the contract was secured in September 2016 and with the winter break, Hawkins had time to plan the work schedule for the spring.”

On an average day, there are about 30 Hawkins and subcontractor workers on site. The earthwork crews preparing the westbound lanes placed about 500,000 cu. yds. of embankment. The crews working on the old road expect to remove about 150,000 sq. yds. of asphalt and concrete. This work is nearly complete. These materials are being recycled on site and will be used for future projects.

The work area is along a rural section of road, which gives Hawkins plenty of room to park equipment, store materials and set up field offices. Their section of U.S. 30 has no bridges and utility issues were minimal as power, gas and some fiber lines were relocated.

“There were no hold ups other than some right-of-way issues,” said Crockett, who added that he meets with Nebraska DOT officials weekly. “Our meetings are productive, and any issues that come about, we figure out a solution. We've got highway traffic running right next to us, so safety is obviously paramount in everything we do. We have grade separation from where we are working, so we don't need any barriers.”

Due to the nature of the work, Hawkins is employing a full grading fleet with excavators, dozers, pavers, rollers, and a variety of trucks, complete with an onsite mechanic. The company's shop is 75 minutes away, and when needed, additional mechanics are brought in.

“We have enough equipment that we need a mechanic on site,” said Crockett. “We're dealing with normal wear and tear issues. The sandy conditions create a little more wear and tear on your track equipment.”

Repairs are executed rapidly by the experienced mechanics.

For this project, Hawkins purchased some trucks, an excavator and a dozer. Some of the equipment that can be seen includes GZ pavers, GOMACO paver and trimmers, Cat 349 excavators and Cat D6 dozers.

This winter has been a cold one thus far, and like other general contractors, Hawkins crews have been impacted. Prior to the winter break, crews were removing existing eastbound pavement to prepare for grading in the spring.

Crockett has no plans to alter the work schedule for the spring.

“We're pleased operationally with how things are going,” he said.