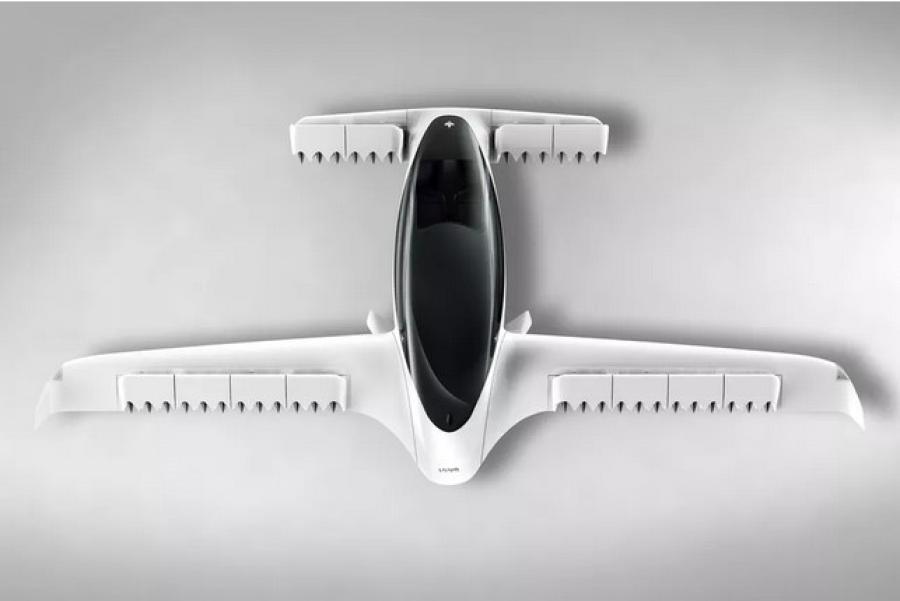 Lilium said it will construct a $25 million “vertiport” in Lake Nona, Fla., a planned community of approximately 65,000 people within the Orlando city limits.(Lillium photo)

One of Germany's premier flying taxi startups just gained a foothold in the United States.

Lilium, the five-year-old venture-backed startup from Munich, announced earlier in November that it will build a 56,000-sq.-ft. transportation hub for its aerial taxi service in Orlando, Fla.

The company aims to have passengers taking regional trips in its electric five-seater aircraft starting in 2025.

Lilium said it will construct a $25 million "vertiport" in Lake Nona, Fla., a planned community of approximately 65,000 people within the Orlando city limits. It will work with the primary real estate developer in the area, Bahamas-based Tavistock Development Company, on the planning and construction of the vertiport.

The aircraft maker said the project will be privately financed, though the Orlando City Council is considering awarding the company an $831,250 tax break over nine years, according to the Orlando Business Journal. Lilium added that the hub will create more than 100 jobs, and the city estimates the transportation center will generate $1.7 million in economic activity in a 10-year period.

Lilium is the latest electric vertical takeoff and landing (eVTOL) startup to take an incremental step toward launching a full-scale regional transportation service. The company's chief operating officer, Remo Gerber, told The Verge the plan is to create service where passengers can fly to nearby cities in a much shorter time than it takes to drive.

"So now they can connect to Tampa in 30 minutes, which is a notorious one-and-a-half to two-hour drive," Gerber said. "There's no other alternative to get there. But you cannot just get to Tampa, you can go two extra minutes and you're in St. Petersburg."

Lilium burst onto the scene in 2017 when it announced the first test flight of its two-seater prototype. Two years later, the company started testing its five-seater prototype, the Lilium Jet.

The Jet is not your typical aircraft; there is no tail, rudder, propellers or gearbox. It has an egg-shaped cabin perched on landing gear with a pair of parallel tilt-rotor wings. The wings are fitted with a total of 36 electric jet engines that tilt up for vertical takeoff and then shift forward for horizontal flight. In final form, the Lilium Jet will have a range of 186 mi. and a top speed of 186 mph, the company said.

Those capabilities are much better than many of its competitors are predicting of their electric aircraft. Gerber said this was due to the Jet's fixed-wing design, which requires less than 10 percent of its maximum 2,000 hp during cruise flight. Just this past year alone, the company has raised $275 million from investors, but the funding round fell short of the $400 million to $500 million that TechCrunch reported Lilium was pursuing last October.

The German aircraft maker is not the only company with designs for flying taxis. There are more than 100 different electric aircraft programs in development worldwide. Additionally, Lilium is not the only eVTOL company eyeing a U.S.-based service. Earlier this year, Chinese drone maker Ehang demonstrated its autonomous air taxi in America for the first time, with its all-electric two-seater flying above a test track south of Raleigh, N.C., for about five minutes.

Of course, Lilium and all its competitors will need to overcome many serious technical, financial, and regulatory hurdles before any of their small, battery-powered aircraft are cleared for takeoff. Lilium, for instance, needs to publicly demonstrate that the Jet is safe for human passengers and that its battery range can be independently verified.

The power-to-weight ratio is a huge challenge for electric flight. Energy density — the amount of energy stored in each system — is the key metric, and today's batteries do not contain enough energy to get most planes off the ground. By way of comparison, jet fuel gives an aircraft about 43 times more energy than a battery that is just as heavy.

There have been numerous demonstrations of battery-powered flight, but there are no electric aircraft in commercial operation anywhere in the world. Any flying taxi service in the United States will have to be certified by the Federal Aviation Administration. And Lilium still needs to figure out how it will produce its vehicles at mass scale.

"Building the networks, getting the approvals, is difficult and hard work," Gerber said, "but I think all of it is possible. We know it's possible, but it's certainly something to remain humble about."