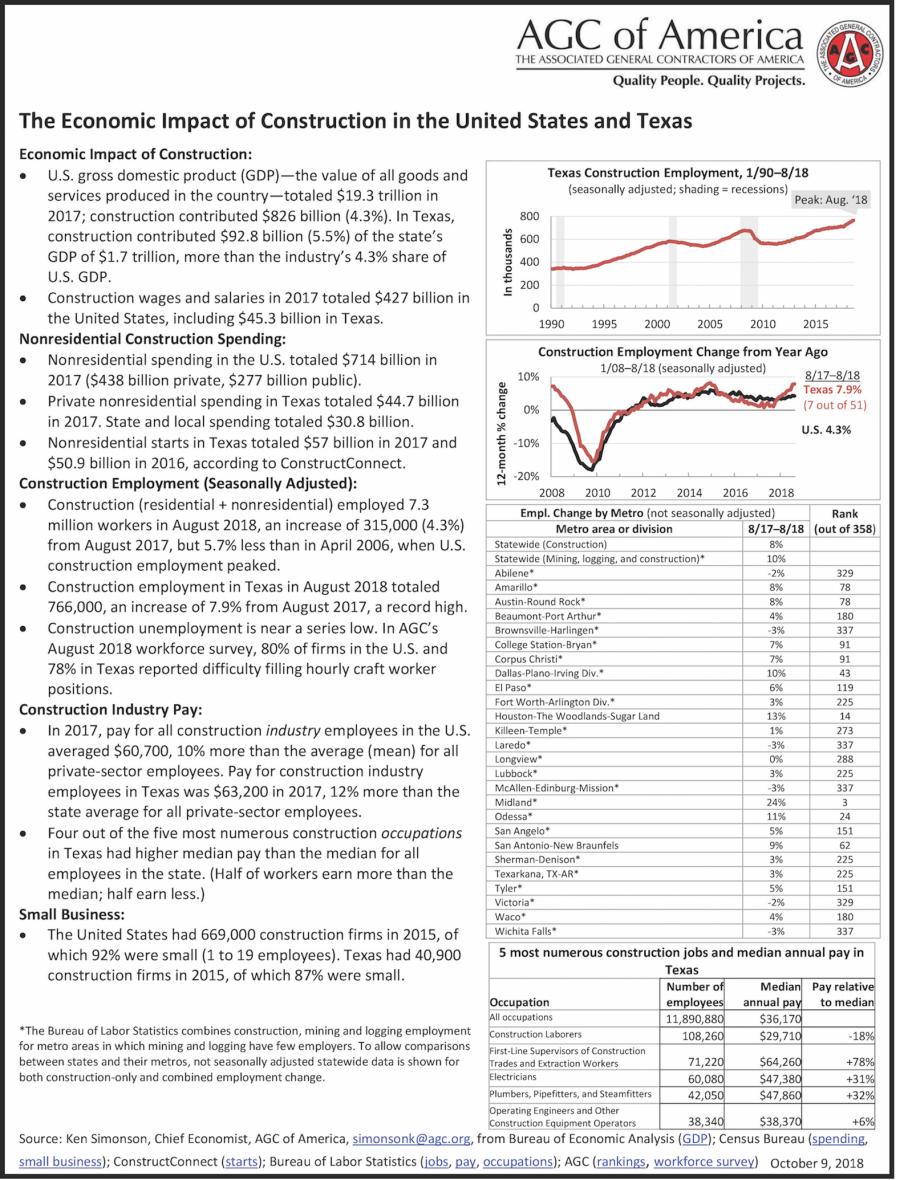 Texas contractors had a generally strong year in 2018 and can expect a repeat in 2019. However, there are three reasons for caution: rising materials costs, an ever-tightening labor market and increasing interest rates.

Nationally, construction employment increased 4.6 percent from October 2017 to October 2018, nearly triple the growth rate for total nonfarm employment, according to the Bureau of Labor Statistics (BLS).

In Texas, construction employment in October reached a record high of almost 770,000, an increase of 60,000 or 8.5 percent from a year earlier.

Unemployment increased in all of the state's major metro areas over that span.

The Dallas/Fort Worth/Arlington metro area added 13,600 jobs but gains were uneven. The Dallas/Plano/Irving division added 14,100 jobs, a 10 percent increase, while employment in the Fort Worth/Arlington division slipped by 500 jobs or 1 percent. (The BLS data for D/FW includes mining and logging with construction to avoid disclosing information about industries with few employers).

Despite these hefty employment increases, contractors overwhelmingly report difficulty in filling positions. Construction industry job openings at the end of September were the highest for any September in the 18-year history of BLS's Job Openings and Labor Turnover Survey, while the number of unemployed workers with construction experience was the lowest since BLS began presenting that data in 2000. Thus, it is no wonder that 78 percent of Texas contractors that participated in AGC of America's 2018 workforce survey reported difficulty filling hourly craft positions.

Tight labor availability seems sure to continue, if not intensify, in 2019. The number of individuals reaching retirement age keeps growing, while the number of people entering the labor force has stagnated. Meanwhile, restrictive immigration policies are reducing the availability of foreign-born workers, a group that has historically been a major source of employees for the Texas construction sector. The stiff competition for qualified workers amid flat or falling supply is likely to drive labor costs higher in 2019, either directly through higher pay or indirectly through higher expenditures on recruitment, training and overtime.

Materials costs also appear headed higher. From October 2017 to October 2018, BLS' producer price index (PPI) for materials and services used in all types of construction jumped 6.6 percent. That was before the full effect of tariffs on steel, aluminum and thousands of Chinese products had been felt. Costs may rise even more in 2019 once items that were in inventory or ordered before the tariffs were imposed are used up. The tariffs and countermeasures that United States trading partners have imposed also may reduce demand from manufacturers, logistics firms and ports for facilities they would otherwise have built.

Although interest rates have fluctuated in late 2018, the Federal Reserve's determination to keep inflation in check, along with the federal government's need to finance much larger deficits in 2019 and beyond, suggest that interest rates will increase. That may keep some home buyers from qualifying from mortgages, cause developers to decide some income-producing buildings will not "pencil out," and reduce the number of projects that school districts and other municipal bond issuers can finance.

Despite these challenges, United States' contractors appear to have enough backlog and prospects for new orders that 2019 will be another positive year. Due to high population growth, a strong energy sector, and ongoing recovery from the 2016 hurricane and flood, Texas contractors will be even busier than most.