From Humble Beginnings to Powerhouse Contractor 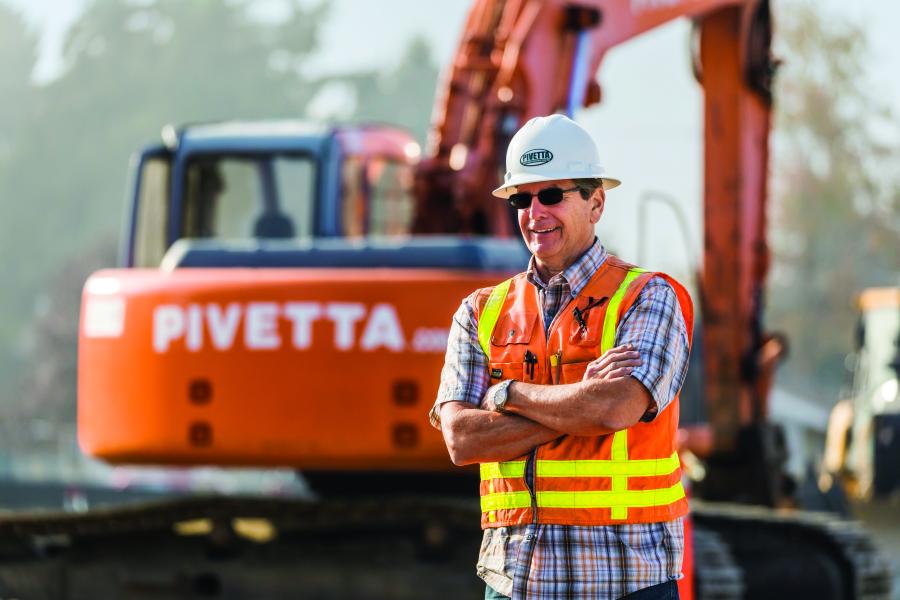 It was 1979. Mark Pivetta was just a guy with $600 and an idea to start a construction business with his brother. Fast-forward to 2018, and life is looking pretty good with a growing demand for work and Hitachi equipment to get the jobs done.

Although Pivetta Brothers Construction, based in Sumner, Wash., started from humble beginnings, owner Mark Pivetta has grown the family-run company into a powerhouse contractor while keeping a down-to-earth business culture.

“My brother and I started this thing in 1979 with $600 each,” he said. “Most people would laugh at you like you were crazy if you said you started a construction company with $600. But my philosophy has always been that if somebody else built it and designed it and figured it out, I can figure it out. As I always say, it's not rocket science; we're moving dirt here, we're not building nuclear missiles.”

But don't let Pivetta sell himself short. After nearly 40 years in business, Pivetta Brothers Construction is doing a lot of things right. And one of those things is having reliable equipment on job sites — like its fleet of Hitachi excavators.

Pivetta, a former heavy equipment mechanic, will be the first to admit he's got an addiction — to construction equipment.

Before investing in his equipment, Pivetta definitely does his homework.

“Years ago, I did a comparison and I went through and measured the thickness of the body, the turntables, the booms, the cylinders and other things,” he said. “So when I bought my first Hitachi excavators after the comparisons, I was pretty impressed with them. They've been wonderful machines. We have a good maintenance program, but as far as repairs, the machines have been very limited and they've been very reliable.” 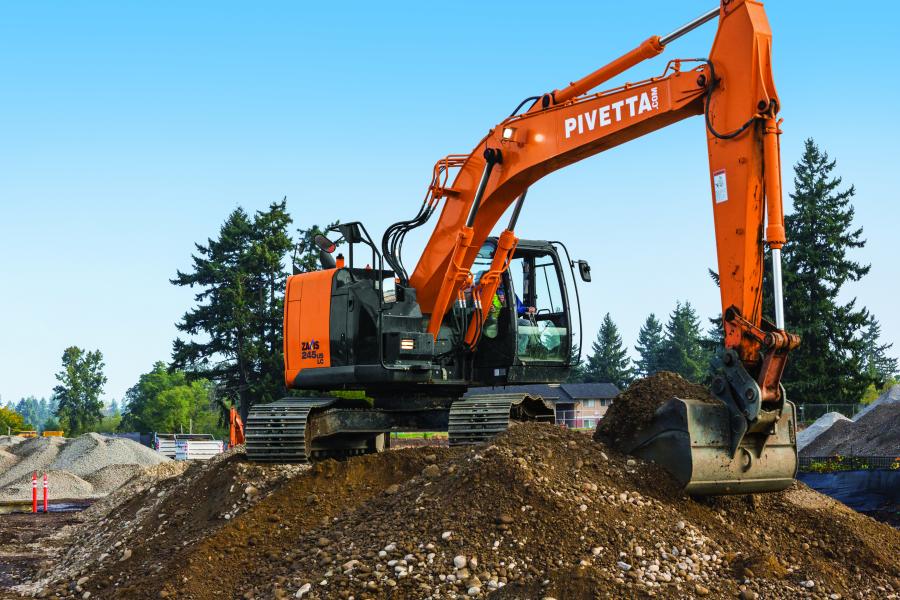 Pivetta's collection of Hitachi excavators has grown over the years. He currently has about 15 in his fleet, which includes a mix of veterans and shiny, new iron.

“Hitachi builds an excellent piece of equipment,” he said. “We're still running our first Hitachi — a 225 with over 14,000 hours on it! Some of the biggest items that have attracted us to Hitachi are the longevity, reliability, hydraulic systems and Isuzu engines. We've had nothing but good luck with Hitachi. They work every day, don't let us down, are very reliable, fuel-efficient and do the job that's needed. That's what pays the bills.”

“The Hitachis are our digging machines,” he said. “Every Hitachi I buy, I buy it with a minimum of three buckets — two sizes of digging buckets and a clean-up bucket — and a hydraulic quick coupler. This makes the machines more efficient and you waste less material by using the proper-sized bucket. Dig as narrow a ditch as possible to get your utilities in, use less backfill, and get more pipe in the ground at the end of the day.”

Armed with its Hitachi fleet, Pivetta Brothers Construction has made a big impact on the western Washington area. The company completes public, private and governmental projects from pump stations, lift stations and water tanks to mass excavation, road work, infrastructure, bridges and more.

“The exciting part is to drive by and see something you built and it's still there; it's still used,” Pivetta said. “The older I get, the more I appreciate what we've done. My people and our company have kind of left our footprints all over western Washington.” 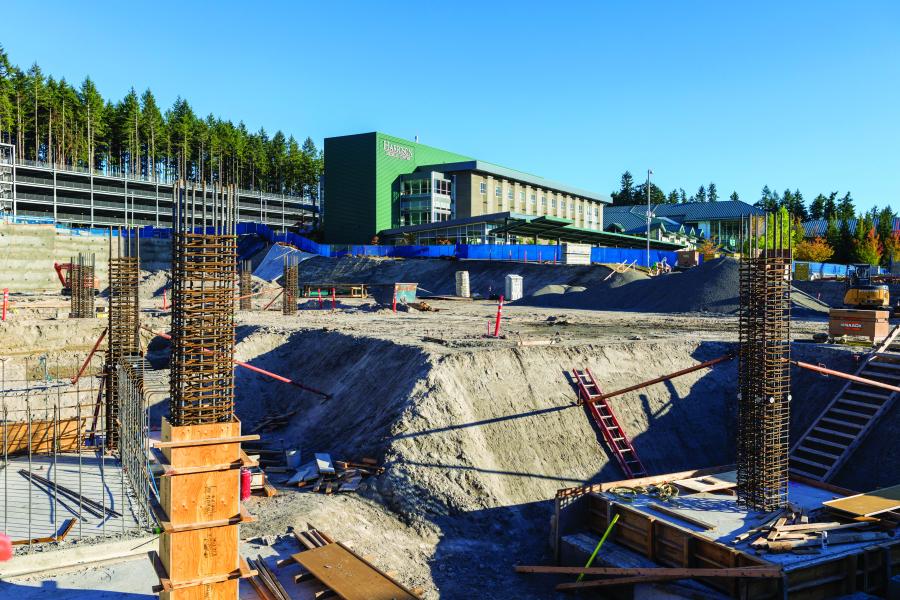 A major project in progress for Pivetta Brothers Construction is the Harrison Medical Center expansion in Silverdale, Wash., which includes a nine-story hospital, a four-story medical center, a five-story parking garage and 11 acres of site development. The location itself is impressive — set between backdrops of the Olympic and Cascade Mountains.

The company has completed work for the medical center and parking garage and has moved on to the hospital structure. The new $350 million Harrison Hospital, which will replace an older hospital in Bremerton, will offer private patient rooms, critical acute care services including heart care, a Level III trauma center and an integrated cancer center.

“Overall, it's a five-year project for the CHI Franciscan Health Group,” Pivetta said. “It's approximately a 24-month project from start to finish on our portion of the work.” 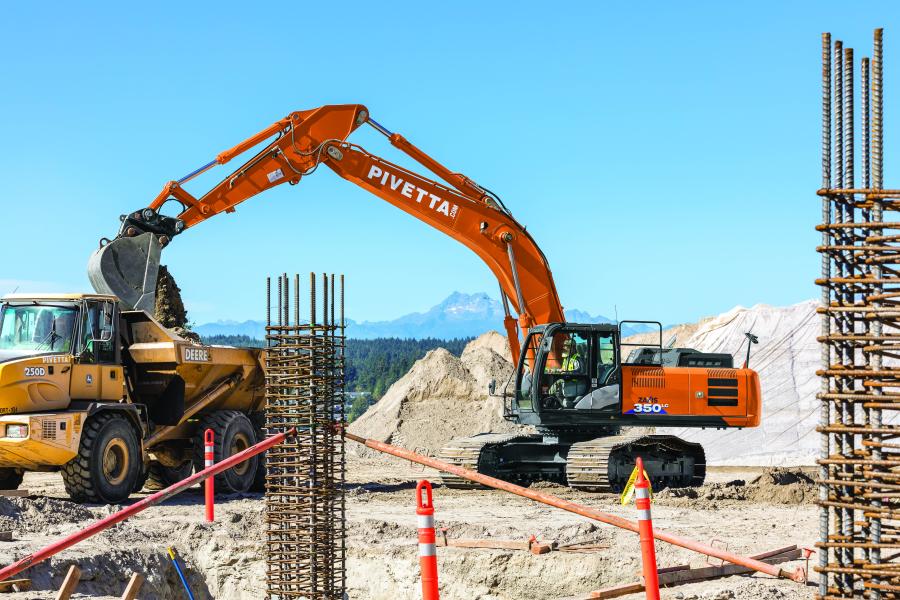 Among other Hitachi excavators, Pivetta has dedicated his new ZX350LC-6 as the primary workhorse on the job.

“Our work performed for the hospital phase will be mass excavation; digging the footings with cuts as deep as 47 feet; excavation for electrical and plumbing; civil work for the storm drain, water and sewer; fire protection system on the outside; and prepping for paving and sidewalks,” he said. “So far we have moved 105,000 cubic yards of material.”

When it comes to the company's secret to success, Pivetta said the machinery makes life easier, but the people make the real difference.

“Papé Machinery, our local dealer out of Fife, has been an excellent partner,” he said. “They have put together excellent financing packages; they have great parts and service; and their sales department has been excellent to deal with. They know what we need and have programs that help us get the equipment out on the jobs.”

Along with dependable dealer support, Pivetta also knows how to hire outstanding employees.

“We have a lot of long-term employees — many that have worked for me for 25 to 30 years,” he said. “We run about 55 field employees and I know every one of them. They're good people; we're like a family and it's made it fun.”

As Pivetta looks toward the future, his down-to-earth attitude and uncompromising work ethic continue to be reinforced with a dose of true grit.

“I can't do it all myself,” he said. “It's about the people that I've brought along on the journey with me and it's all worked out for us so far. When things get hard, we put our heads down and figure out a way to make it through it. Never give up.”