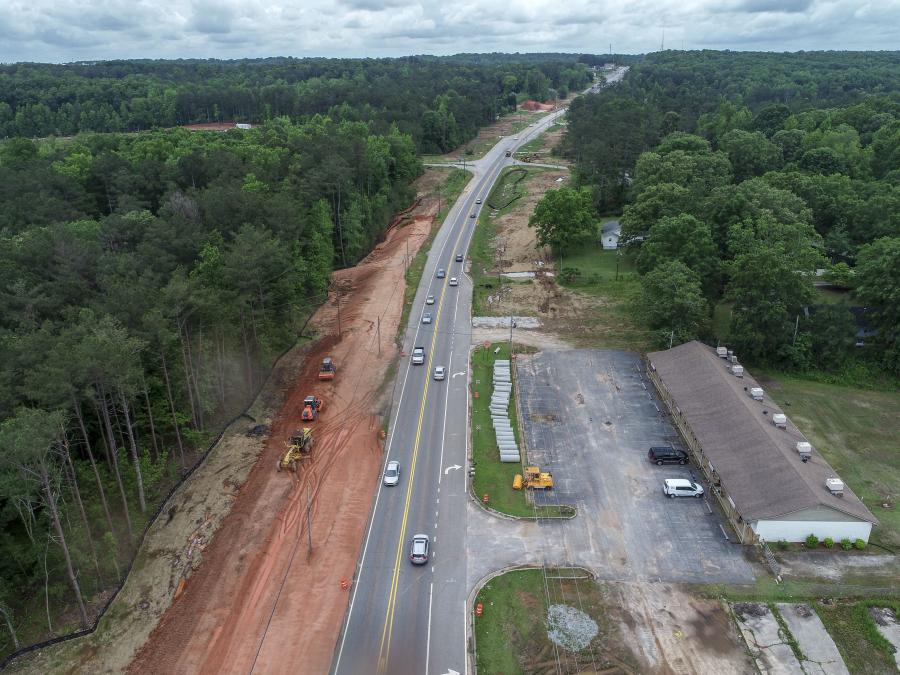 Last November the C.W. Matthews Contracting Company Inc. began work on the multi-year, $51,173,350 widening and reconstruction of State Route 92, a Georgia Department of Transportation (GDOT) project that begins at Malone Road in Douglas County and goes north to Nebo Road in Paulding County.

“The total project length is 6.932 miles, which include three bridges and their approaches within the limits of the project,” said Mohamed M. Arafa, GDOT Communications Officer of D6- Northwest Georgia. “The project is on schedule and on budget.”

“From Malone Road to Bill Carruth Parkway, the project will widen the existing State Route 92 from one lane in each direction to three lanes in each direction with a 20 to 24 foot raised median, including turn lanes at certain intersections,” said Arafa. “This section of road will be a 55 mph roadway. All existing traffic signals will be rebuilt/upgraded as part of the project.”

“The widening will allow this section to accommodate an estimated average daily traffic volume of 33,000 vehicles per-day in year 2039,” said Arafa. “Upon completion, this project will improve the flow of traffic in the area, make it safer and help the public get where they need to go in Paulding and Douglas counties.”

The project, which has been in the planning stages for many decades, is intended to meet a transportation need that has been growing.

“With the increasing population growth in Douglas and Paulding Counties over the last few decades, SR 92/Dallas Highway has become a major transportation corridor for vehicles traveling between the two counties, especially to gain access to I-20,” said Arafa. “The SR 92/Dallas Highway corridor is the only direct corridor between the cities of Hiram and Douglasville and one of only three travel corridors between Paulding County and I-20.

“This project will provide a continuous multi-lane corridor from Douglasville to Hiram,” he added. “Furthermore, the project, in conjunction with other projects in the GDOT Construction Work Program (CWP) and the Atlanta Regional Commission's TIP, will provide a continuous multi-lane north-south corridor from I-20 to SR 120 in eastern Paulding County.”

The traffic management plan has been designed to maximize the construction activities and keep traffic flowing.

“The construction work plan aims at minimizing expected traffic delays by not allowing lane closures during traffic peak hours and minimizing road closures to a maximum of 10 days-per location,” said Arafa. “For each side road closure, an assigned detour route will be in place to provide access. No double lane closures are allowed at any time. Side road closures will be permitted for a maximum of 10 consecutive days per each side road. Traffic signal loops removed during resurfacing at all signalized intersections will be replaced and operational within five days of the completion of work at each intersection.”

There will be ample day and night work, including weekend work. Single lane closures on weekdays last from 9 a.m. to 4 p.m. and 7 p.m. to 7 a.m., with various hours on weekends.

Thus far C.W. Matthews has completed the following aspects: cleared and grubbed about 75 percent of the area for the widening, which was halted due to the federal requirements for Protected Species; installed all the initial erosion control items; placed some of the storm drain pipe; and continued coordination activities with various utilities for relocation.

The benchmarks for the remainder of the 2018 construction season are Stage 1 construction for the roadwork and utility relocation.

“The biggest thing that we see as an obstacle is the utility relocations — power, water, gas, and communication lines,” said Frank P. Crumbley, C.W. Matthews' senior vice president, Roadway Division. “They have to be done to allow the project to advance. For example, we have three bridges on this project and none of them can start until the utilities are relocated. It's mainly a day job, but we will work at night when conditions merit it such as placing asphalt pavement when there is less traffic. We'll have some pipe crossings that we'll also do at night.” 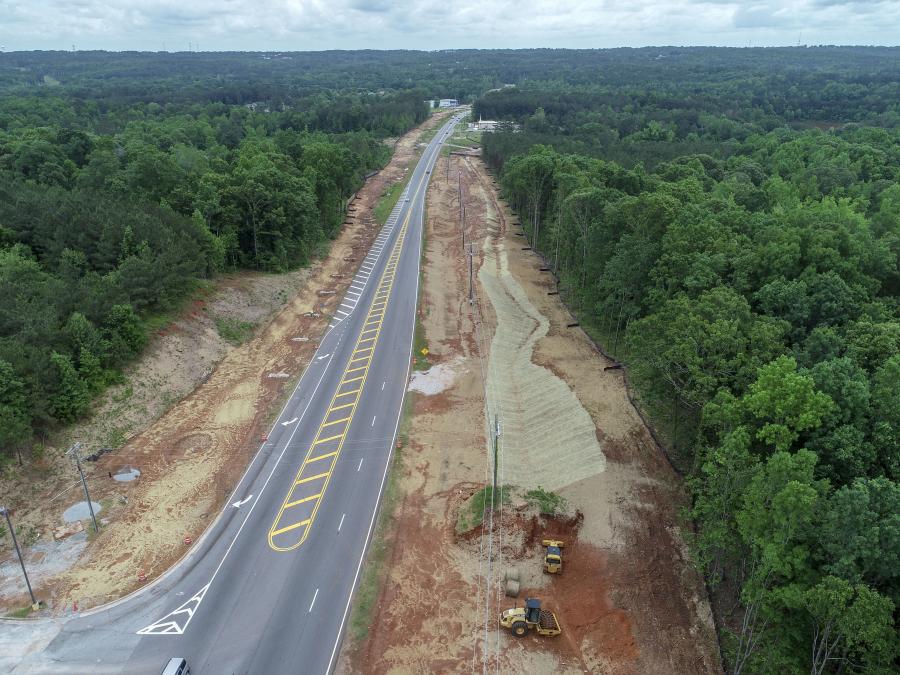 When the work switches into high gear, there will be multiple work sites and the number of construction workers will increase from five presently to an estimated 25-50 later on. The utility companies are self-performing their relocation work, but are coordinating that with C.W. Matthews in regards to prioritizing where they can.

“What we've learned from the past is that by coordinating, scheduling and assisting the various utility companies, even when it is not in our scope of work, it benefits the project overall,” said Crumbley. “When the travelling public rides by a job and sees nothing advancing, a lot of times that is because we're waiting on utilities to be relocated.”

Crumbley, who has managed many GDOT projects, appreciates their understanding when problems arise that can delay progress.

“Communications with GDOT and other stakeholders is very important,” he said. “We have weekly progress meetings and monthly scheduling meetings internally and with GDOT.”

“Contractors would love to be able to construct projects in a linear fashion, meaning starting at one end and building it as you go,” said Crumbley. “Unfortunately, utility issues, time constraints, or other isssues out of the control of the contractors makes us appear to be jumping around. Sometimes we have to do whatever it takes to complete the project in a timely manner.

“It's a staged job and the traveling public won't be in final configuration until the section is completed,” he added. “Phase 1 construction always takes the longest. We'll have crews laying down storm drain pipe and others moving mass quantities of dirt. Later we'll have a third crew that is preparing the gravel and asphalt for the new roadway.”

Paulding County has received above normal rainfall since January, which has accounted for the fewer employees on-site. The plan is to make up for the lost days by doubling up crews and working on all available days when applicable.

“It sounds complicated,” said Crumbley, “but it's part of what we do day-in and day-out on other jobs. The start of the bridge work will depend upon the utilities, but will probably start in March/April of next year.”

The ready mix is being provided by various vendors, while C.W. Matthews will provide the asphalt from its own ASTEC HMA plants. The contractor will be self-performing about 60 to 65 percent of the work, including grading, pipe laying, placing GAB, producing and placing asphalt, and building walls, bridges, and all the concrete flat work.

“The only things that we typically subcontract out is for specialty items such as guardrail, striping and traffic items,” said Crumbley.

Within the site, crews will be moving around 360,000 cu. yd. of on-site dirt that will be excavated, with another 280,000 cu. yd. brought in from borrow pits. About 85,000 tons of asphalt from the existing roadway will be removed and recycled. CWM utilizes their own fleet of milling machines. The plants will produce and crews will install approximately 157,750 tons of HMA.

The concrete beams for the bridges, a total of 7,622 linier ft. of beams, are being provided by Standard Concrete Products, a local supplier.

John Faress, vice president of Equipment Division, said, “CW Matthews has a fleet of over 740 pieces of mobile equipment.”

“Our primary equipment vendors are Yancey Bros. Co. for all our Cat needs; Tractor and Equipment Co. for Hamm, Entnyre and Wirtgen; MHC / Kenworth for our heavy trucks; Wade Ford for our pick-ups; Atlantic & Southern for our Linkbelt Cranes; and Roadtec for much of our paving equipment,” said Faress.

CWM's fleet of fifteen Maintainer lube trucks is used not only to deliver fuel and DEF, but also to perform preventative maintenance on its fleet of mobile equipment throughout north and central Georgia. CWM uses Caterpillar's Product Link and its Visionlink interface to effectively manage its fleet.

With four more years of work to complete, Crumbley knows that his crews will meet the deadline.

“We're very confident,” he said. “This is what we do all day long. We're used to the pressures of a tight schedule and coordinating with different subcontractors, utilities and owners to accomplish the common goal of safely completing a project on-time and under budget. It's only when things that are out of control such as the weather or utilities that we find ourselves straying from that goal.”

Crumbley stated that the key players for CWM are David Cauble, the general superintendent over the project; Lee Mims, the project engineer; and Brandon Hanson, the project superintendent, all of whom have considerable experience in the industry and are long-term employees of the company. 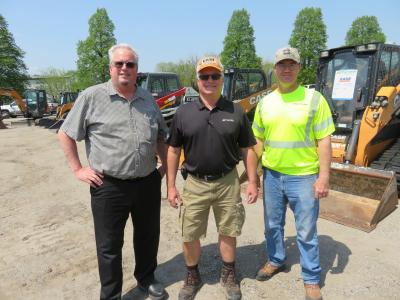