It may be remote, but the city of Palmer and the area around Anchorage — the state’s biggest city — is one of the fastest growing areas in the state. 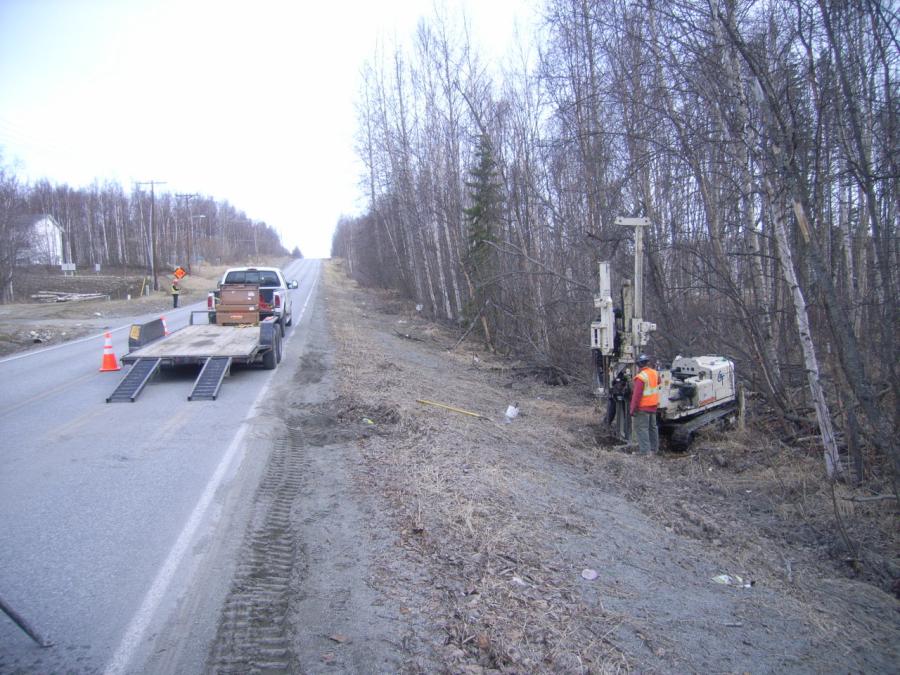 State of Alaska Department of Transportation photo In order to design the embankment for the Glenn Highway upgrades, geotechnical exploration is necessary to gather data that will assist the design team in learning about the ground conditions throughout the project corridor.

“Most of Alaska is pretty remote,” said Sean Baski, project manager, State of Alaska Department of Transportation, Central Region Highway Design Section. It also features some of the harshest terrain in the United States.

It may be remote, but the city of Palmer and the area around Anchorage — the state's biggest city — is one of the fastest growing areas in the state. Anchorage, hemmed in by mountains, water and a military base, has no space for growth, so people are building farther out, where land is cheaper. Living in these “bedroom communities” and working in Anchorage results in a lot of commuter traffic.

In addition, a safety study/crash study conducted over a 10-year period from 1997 to 2007 showed two fatalities, 12 major injuries, 112 minor injuries and 655 crashes on the highway between milepost 34 and 42.

“There have been numerous fatalities since then,” Baski added. “There's an obvious problem.”

The two-lane highway, which runs through urban and rural areas, has a lot of traffic with a 55 mph speed limit. The biggest problems occur where it intersects with driveways and collectors, or arterials.

“There are three phases of one big project,” Baski said.

More specifically, the Glenn Highway Milepost 34-42 Reconstruction Project, Parks Highway to Old Glenn Highway, has been split into three projects. The first is the main reconstruction project that consists of two lanes in each direction, frontage road and left and right turn lanes. The second project will construct a pathway from Matanuska Lakes State Recreation Area to Arctic Avenue. The third project realigns the Colleen Street intersection and extends a frontage road.

Funded by federal money, Baski puts the budget in the $100-$150 million range, which includes design, right of way acquisition, utility relocation and more.

The overall project started a long time ago, Baski noted.

“The environmental documents were completed in the 1990s. It's a long corridor; this is just a portion.”

The Parks Highway to Old Glenn Highway Pathway Project will construct a 10-ft. (3 m)-wide separated pathway along the north side of the Glenn Highway from the Matanuska Lakes State Recreation Area into Palmer. The environmental document is currently being prepared, with the final design anticipated to start in 2016.

The Colleen Street Intersection and Frontage Road Project will realign Colleen Street and Grandview Road to a new signalized median opening on the Glenn Highway. It also will extend Grandview Road along the east side of the railroad tracks to consolidate access. The environmental document is currently being prepared, with the right-of-way appraisal and acquisition phase and final design anticipated to start in summer 2016.

In August 2015, approval was received from the FHWA to begin appraisal and acquisition of the right of way needed for the project. The design phase of the project is under way, and drawings are being developed to refine impacts to the environment, properties and utilities. The project team is working with adjacent property owners on design refinements.

The final roadway will be a four-lane divided highway. Baski explained that ADOT designs for the future.

“We designed 15-20 years out for anticipated demand,” he said.

It will add lanes, widen shoulders, accommodate turning movements at designated turn pockets, and add other traffic and safety improvements.

For example, they will drop the road 20 ft. (15.2 m) stretching “a couple thousand feet” between the Bradley and Echo lakes, using graders and scrapers to haul the soil to another site.

“It will be reconfigured as four lanes with a divided median in order to provide better sight distances at the intersections,” Baski explained.

They will drop the road so they can get enough width to avoid retaining walls and “stay out of the lakes,” but the safety reason behind it is to put intersections at grade for better visibility to minimize accidents.

By hauling off the soil they will remove, there will be less need to bring in borrow dirt.

“It's what we call a balanced job,” Baski said.

Work is expected to start in 2018-19. Until then, they are still in the design phase.

“As part of the design phase, we have to design the roadway embankment to make it last,” Baski said.

In order to design the embankment for the Glenn Highway upgrades between Glenn/Parks Interchange and Arctic Boulevard/Bogard Road in Palmer, geotechnical exploration is necessary to gather data that will assist the design team in learning about the ground conditions throughout the project corridor.

“You don't want to build on clay, silt or fine-grain sand,” Baski said. “Gravel is best.”

A geotechnical engineer looks at the design map to determine the location and number of drilling spots, which are carefully chosen so as to make best use of taxpayer dollars. Geotechnical drilling is done on all projects, Baski noted.

In fact, he said, “You have to for bridges. We drill for traffic signals, lumineers [light fixtures] and foundations for bridges and retaining walls.”

Preliminary drilling was done before the design was finalized. Now, GeoTek Alaska is conducting a two-month drilling program. Its work began within the right of way owned by the State of Alaska. Requests for permission to access private property to complete the drilling was sent to affected property owners.

Drill rigs can be small, large or mounted. First, the crews must level the rig. Then they use a hollow-stem auger and split-spoon sampler that is pounded past the auger through the soil to collect samples. In addition to drilling in more open areas, they will conduct core drilling to make a tiny hole in the asphalt to learn about the soil underneath existing roadways.

“This is a reconstruction project,” Baski noted. “We are removing the road and making it wider.”

The information from drilling is used to tweak the design before letting it to bid.

“You don't want to build on clay, silt or fine-grain sand,” Baski explained. “Gravel is best.”

It's also used to provide information necessary for contractors to bid the job.

“We provide an estimate of quantities needed. That helps contractors when they're bidding,” he said.

While geotechnical drilling is old technology Baski discussed other methods for gathering information about soils beneath the surface, such as a heat probe — ground-penetrating radar that locates sinkholes, lasers that determine the road's International Roughness Index because the smoother a road is, the longer it lasts, and various forms of non-destructive testing such as the falling-weight detector, which simulates a car driving on asphalt to measure the deflection from the load.

Because this area is a glacial valley, the soils are good. In fact, there are several gravel pits in this region that serve as the source of material for other projects.

“The results aren't back yet, but we're not expecting to find anything out of the ordinary,” he said. “This area has good soil.”

If no surprises are found, Baski anticipated the project adhering to scheduled timelines, even though work will be suspended during the Alaska State Fair since the Fairgrounds sits along the route.

To keep the project on track, a team of nearly 100 is doing preliminary work on the project. The list includes electricians, designers, ROW acquisitionists and State of Alaska Department of Transportation geologists.