Harvard Advocates for 'All At Grade' Approach for MassPike Upgrade 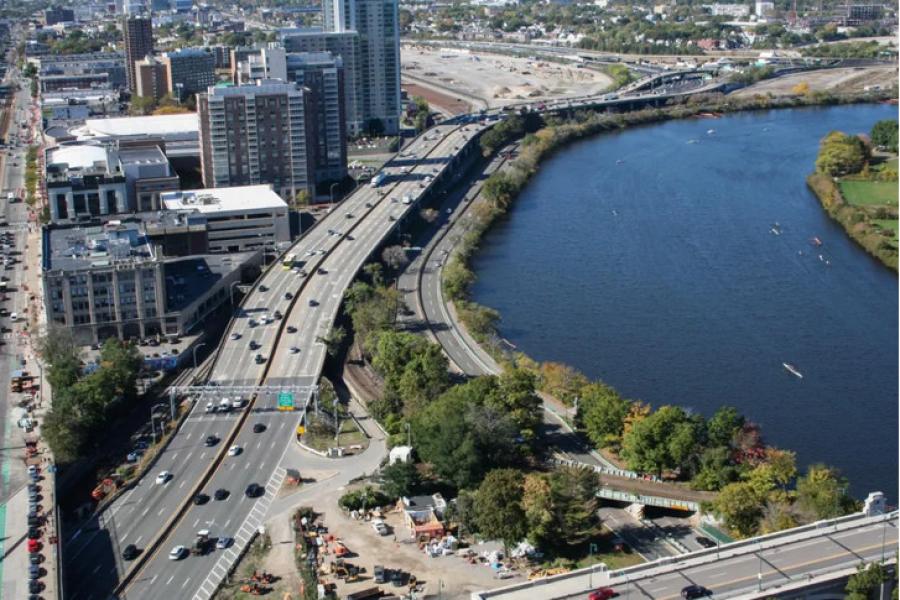 An aerial view of the “throat” section of Interstate 90 near Boston University, looking west toward the vacant former railyards where Harvard University aims to develop a new urban neighborhood of housing, office and lab space. (MassDOT photo)

Since 2014, Massachusetts' leading transportation agencies have been planning a massive reconfiguration of Interstate 90, Soldiers Field Road and the Framingham/Worcester railroad line along Boston's Charles River waterfront in Allston.

As the Massachusetts Department of Transportation (MassDOT) weighs its options for redesigning this congested section of the Massachusetts Turnpike (known locally as MassPike), Harvard University spokesperson Kevin Casey wrote in a recent emailed statement to the Harvard Crimson that the school hopes the state will thoroughly evaluate "an alternative all at grade approach."

MassDOT currently is considering several proposals for construction at "The Throat" — the area where the 12 lanes of I-90 converge at the narrowest point — including three "build" alternatives and one "no build" alternative.

MassDOT announced its newest plan — the "Highway Viaduct" alternative — in late June, which would shorten and reduce the width of the highway viaduct.

The rebuild of the turnpike is part of MassDOT's Allston Multimodal Project — a plan that began six years ago to improve the highway, replace the Allston viaduct and create a new commuter line at West Station.

The Allston Interchange carries the I-90/Massachusetts Turnpike through the Allston/Brighton area south of the Charles River, with Cambridge Street and Soldiers Field Road to the north and Brighton Avenue to the south. This is the primary east-west route between western Massachusetts, Worcester, and Boston. It carries heavy vacation traffic during the weekends in the summer and winter.

A Boston business association, A Better City (ABC), also is behind the "all at grade" alternative that Harvard said MassDOT should consider. Representatives from ABC currently serve on the I-90 Allston Interchange Task Force, which consists of residents, business owners, university representatives, and other local stakeholders.

Harvard's Casey said MassDOT has "yielded significant favorable progress on the timing, location and track allocations associated with West Station" in an emailed statement to the Crimson, an independent student newspaper.

He also wrote he hopes the "all at grade approach" will be thoroughly evaluated in a process that yields "an option that minimizes impacts on the river and improves safety."

"With most stakeholders, including the City of Boston, aligning behind an alternative all at grade approach to ‘the throat' proposed by ABC, we hope that it might be included in a similarly fair and robust evaluation process that can generate broad support," Casey wrote.

ABC's website said this solution will "reduce both initial costs and future expense, freeing up resources to make other multimodal improvements, to mitigate the impact of construction and to create better connections."

On Aug. 28, Richard A. Dimino, president and CEO of A Better City, posted a statement on LinkedIn expressing enthusiasm for the prospect of MassDOT advancing the "all at grade" proposal.

"A Better City believes MassDOT is well positioned to move forward with this I-90 all at-grade concept we've advanced with the support of the City of Boston," he wrote. "If MassDOT wants to drive this all at-grade I-90 alternative to success they have a vast team of consultants at their fingertips."