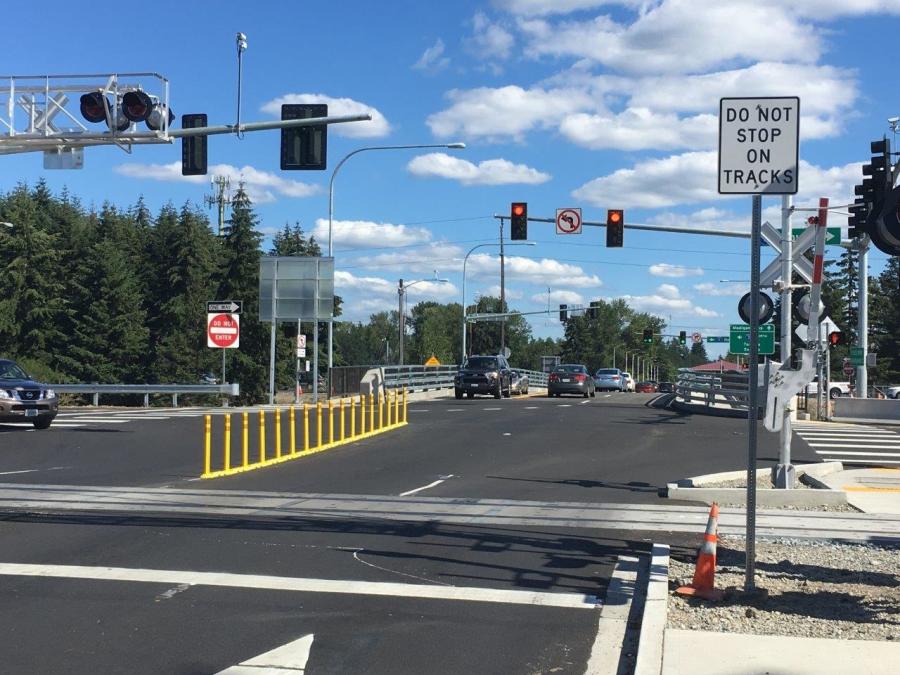 Since the I-5 Madigan Access Improvement project's start in October 2015, drivers traveling the stretch of I-5 alongside Joint Base Lewis-McChord (JBLM) had to contend with nighttime lane closures while users of Berkeley Street had to navigate construction on the southbound off-ramp and across the Freedom Bridge. With the construction finally completed in early July, drivers now have a safer southbound commute and are experiencing improved eastbound traffic flow into the Madigan Army Medical Center.

The impetus for the project started nearly 10 years ago as traffic congestion along this stretch of JBLM was noticeably worsening, especially during rush hour. In 2009, the city of Lakewood, JBLM, and Washington State Department of Transportation (WSDOT) commissioned a study to investigate the reason for this congestion.

Troy Pokswinski, associate civil engineer with the city of Lakewood and project manager of the I-5 Madigan Access Improvement project, said that the study concluded the congestion was due to not only JBLM expanding, but also the rest of the region.

In response to the study, WSDOT drafted a funding package that called for the future expansion and redesign of the interchanges through the corridor and also implemented short-term traffic congestion relief measures such as ramp metering.

However, because there was uncertainty as when the package would be funded by the legislature for the total rebuild, Pokswinski said the city of Lakewood “spearheaded the effort” to implement other temporary mitigation strategies identified in the study.

Grant funding received from the Department of Defense in 2011 through its Access to Improvement grant program provided the $5.7 million for the project, and the city of Lakewood was the only municipality to receive the funding; the other four awardees were state department of transportation agencies. Although WSDOT didn't participate in the grant process, the agency oversaw the construction since I-5 is their right-of-way, and the city managed the grant administration and design of the project.

“It's very unusual,” Pokswinski said of the city of Lakewood and WSDOT's partnership. “As far as I know, there's not too many partnerships like this at all.”

It took two years to work through the design process because the design had to accommodate increased car traffic, as well as more rail traffic. When the city of Lakewood learned that Amtrak intended to increase its trips to 15 times a day starting in 2017, they had to design the traffic signal to also accommodate this 79-mph traffic. The result is the most complex traffic signal in the United States that maxes out the current controller technology available, according to Pokswinksi.

“It will run three intersections as well as be connected to the railway, which is critical and will help move traffic along quite a bit,” he said.

The final design, which added another eastbound lane on the Freedom Bridge, another left-hand turn lane on the southbound off-ramp, and railway work, was finalized in November 2014. Following the confirmation of the rail right-of-way in May 2015, the project was put out to bid. Tacoma-based Ceccanti Inc., which specializes in municipal infrastructure and heavy highway projects, was awarded the project.

“The city has worked with Ceccanti before on previous projects; we have a good working relationship,” Pokswinski said.

Jake Brockmoller, a project manager of Ceccanti, said that the company pursued this project to expand its portfolio to include more structures work.

“Ceccanti has always been a civil company, so they've dealt quite a bit with heavy underground utilities, deep pipe and bridges in the past,” said Brockmoller. “This project was pretty fitting to take in terms of traffic control and being able to retrofit this bridge.”

Retrofitting the bridge came first, and Brockmoller said they worked with form designer EFCO to develop a system of overhang brackets to help support the bridge after demoing each side. They also consulted with local engineers to firm up the design of the retrofit to ensure the Freedom Bridge would maintain its integrity as it was being taken apart.

“To lessen the impact to the public, we had to do the majority of the work at night,” Brockmoller explained. During the demolition, their traffic control crew of 10 managed the traffic flow by closing lanes on I-5, and when necessary, diverting traffic around the work zone via the off-ramps. A bridge crew of 10-11 operators and carpenters completed the majority of the work by the middle of February. In addition to a second eastbound lane, the retrofitted bridge had a number of safety features that its 1950s' design didn't include, such as elevated handrails, wider sidewalks, and a guard barrier between the pedestrians and the sidewalk.

“Everything went very well, although we had some minor hiccups along the way,” Brockmoller said. “Of course being a retrofit, there's always new information when you start opening a bridge up. We found we needed to work extra hard to make sure all the reinforcement was put back together properly.”

After the bridge was finished, work began on the southbound off-ramp to add another left-hand turn lane, as well as adding guardrails and fencing. A 24-hour crew of two shifts with a dozen workers each, completed the work. Although the bridge work was done at night, for the off-ramp Brockmoller said that “Ceccanti worked hard to perform as much of the work during the day because it's safer and production is better.” Of the three project components, he added that “in contrast to the railroad crossing and bridge, the off-ramp was fairly easy.”

For the $1.5 million railroad upgrade crossing, Ceccanti's crew removed the old crossing and regraded the track roughly 100 ft. (30.48 m) on either side of the crossing to improve the profile of the track bed. New ballasts were installed for the railroad to sit on, and the redesigned crossing included new safety features of being ADA compliant and having cantilever arms.

Of the overall project, Brockmoller said that he's happy with how things went; “the schedule was met, budget was maintained so Ceccanti is very happy with the product we produced.”

Pokswinksi described the project as “it's a little bit of everything…nothing is particularly grand or large scale on this project, but it's just a mishmash of everything.”

In spite of the traffic relief these improvements will provide, in five years Berkeley Street will see yet another redesign. After the city received the grant funding, WSDOT received funding for their package to redesign this stretch of the I-5 corridor; the only improvement that will remain is the railroad crossing. The city knew it was a temporary fix going into the project, Pokswinski said, “but knowing the congestion relief for that amount of time would more than pay for that, we realize that's got a lot of value to it.”