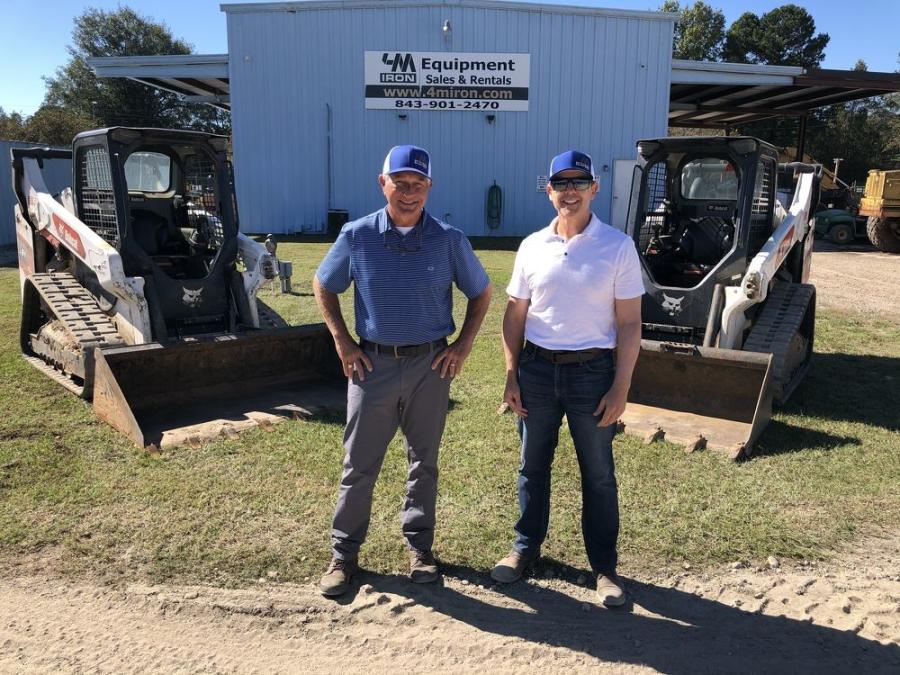 Ross McMillan (L) and Mike Finley of 4M Iron. The company is both a regional and worldwide buyer and seller of used heavy equipment, including earthmoving and agricultural machines, along with on-road trucks and trailers.

When two men working in different sectors of the construction equipment business in South Carolina decided to open their own dealership in 2013, the goal, obviously, was to make it a profitable venture. But just as important to them was to operate it with integrity, honesty and an ever-watchful eye on giving their customers the best in sales and support.

Eight years later, that is exactly what Mike Finley and Ross McMillian have accomplished with 4M Iron, both a regional and worldwide buyer and seller of used heavy equipment, including earthmoving and agricultural machines, along with on-road trucks and trailers.

The company maintains its head office in Charleston as well as a much more prominent main equipment yard approximately an hour's drive northwest in St. George, S.C. What makes the latter site so important to 4M Iron is that it fronts Interstate 95.

With 4M Iron's available equipment for sale or rent positioned in its five-acre yard, I-95 drivers cannot help but see its inventory displayed as they pass by, if even for a brief time, making the location an advertising gem.

"We moved to the site in late 2014," Finley said. "Ross and I had a contractor friend here in St. George who earlier introduced us to the property. We just fell in love with it because it is located along one of the country's most heavily traveled highways. From the marketing research that we had done, we learned that 23 million people would pass our yard annually. There is about 1,200 linear feet of frontage, which is great when you are trying to display a lot of your equipment." 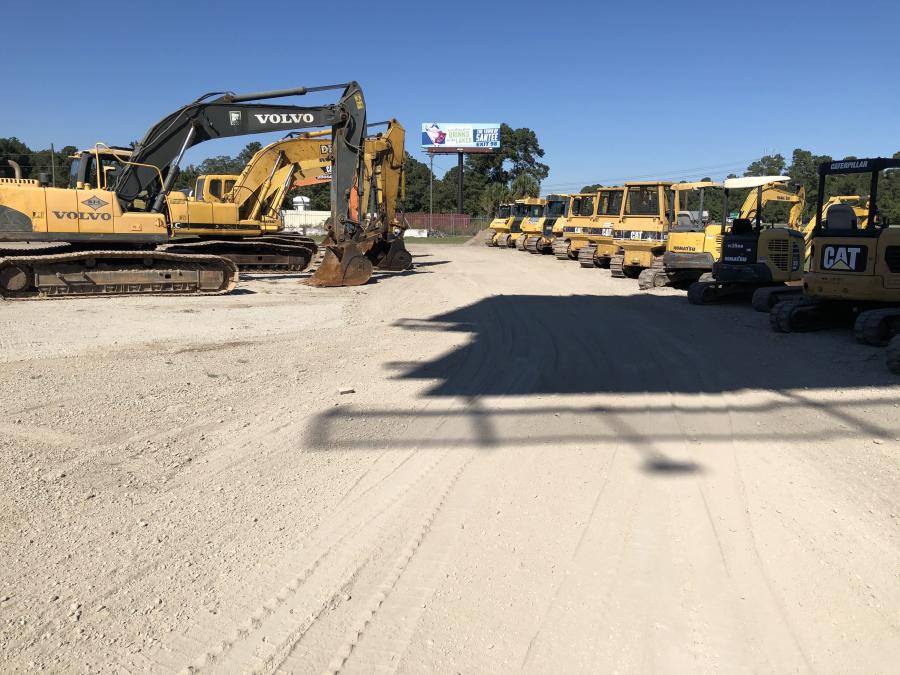 "They are kind of our bread and butter," he said. "We try to inventory a little bit of everything if we can. At 4M Iron, we usually stick with a lot of the mainline products — John Deere, Caterpillar, Volvo, Komatsu — but we do stock machines by other makers like Kobelco and Hyundai, among others. It is used equipment, but along with that we provide great service on a quality made piece of machinery."

4M Iron recently diverted from its normal practice of selling only used pieces when it became a dealer of brand-new Talbert trailers.

Made to transport heavy equipment and other big loads, Talbert Manufacturing provides five types of trailers, based on a customer's needs and can be customized for a range of sectors, including construction, agriculture, utility, military, rail, and inner plant and material handling transport — industries all active in South Carolina.

Finley and McMillian first got to know one another 18 years ago when their paths crossed while buying equipment packages from mutual customers. They found that they were of like mind about how to run a company if given the chance.

"I was attracted to the equipment business because I had worked in corporate America, and I wanted to get away from that and into something more entrepreneurial where I could really build a company," said Finley, a native of Cincinnati, Ohio, and a graduate of Xavier University. "I was also intrigued by the South Carolina marketplace because of [its] growth industries, such as manufacturing and the Charleston port, and what was coming around the corner with so many people moving to the region."

In McMillian's case, he had grown up around the farm equipment business as his father had first owned a John Deere dealership, then a Massey-Ferguson distributorship. Following his graduation from the University of South Carolina, he gathered experience working for several companies in the equipment business. They included Van Lott Inc., the John Deere dealer in West Columbia, for which he worked in the Upstate for seven years. Later, he was part of a prominent equipment auction company for 10 years before meeting Finley.

"We did some deals together, and we had a good working relationship," McMillian said. "Over the course of a few months, he and I decided that we needed to go out and do this business on our own. We had a lot of customers and the same vision on how to treat staff and customers. It has really been a good move for both of us."

Finley and McMillian decided early on to build their company upon a bedrock of integrity and have surrounded themselves with other like-minded people who believe in treating customers fairly and honestly. Those are the attributes that they feel attracts and keeps customers coming back to 4M Iron for top shelf used equipment.

"Ross and I have always prided ourselves on how we treat people," Finley said. "We are going to shoot straight with them and are going to address any problems head on."

To that, McMillian added, "We typically strive to sell someone a piece of equipment, service it the way it needs to be, and treat them fairly, so that when they go to sell that tractor, 4M Iron is the first company they think to call." 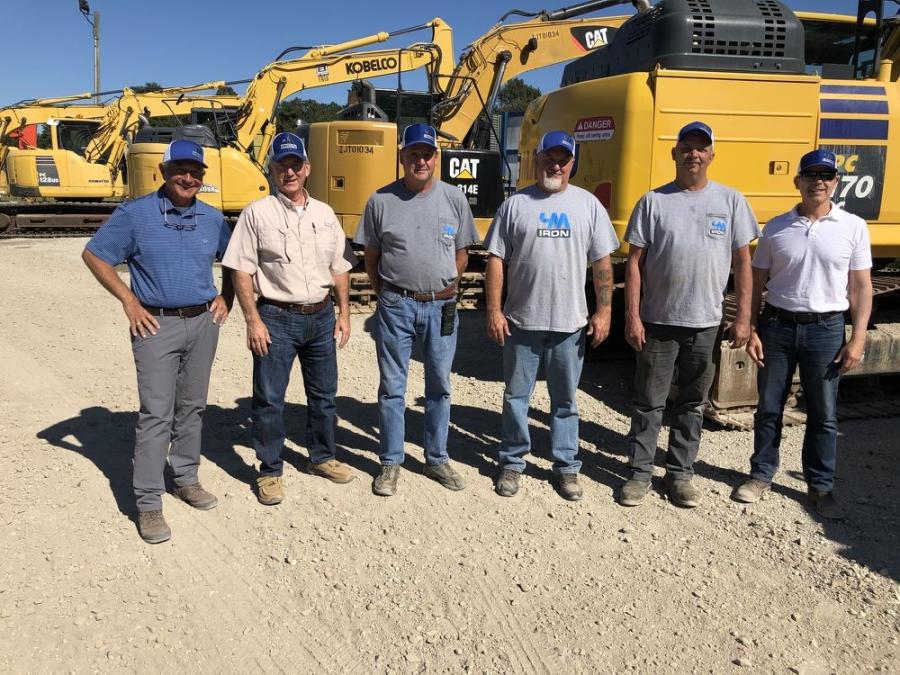 The company's growth came about, Finley said, due to "a lot of hustling, just getting out there and working our tails off to try to engage with as many contractors and customers as we could. Secondly, we realized that 4M Iron needed a sizeable brick and mortar operation where we could have a repair shop, and our sales staff could have a central point where all our inventory would be sitting — whether it was for resale, rent or lease. From there, we have been working to keep up with the different trends in the industry over time."

He also said that he was "very blessed" to have someone like McMillian to share ideas with at 4M Iron.

"I think it is priceless to have a skilled partner that you can consult with to analyze and grow the business," Finley said. "Our skill sets complement each other, and although we may not always agree on everything, we respect each other's ideas on the plan to move the company forward."

He is still amazed at how small 4M Iron was when they founded the company as compared to where they are today with such a terrific location in St. George, coupled with the character and experience of their 11 employees.

Among the equipment distributor's personnel are a pair of full-time shop technicians and an assistant, along with a yard manager at St. George.

McMillian oversees the sales team, which consists of one person each in Atlanta and Charlotte, and another covering the Savannah, Ga./Beaufort/Columbia, S.C., market. In addition, there is a sales representative that handles the area from Myrtle Beach to Florence, as well as southeastern North Carolina. To the northwest, 4M Iron has a rep serving the Upstate South Carolina and western North Carolina region.

The founding partners of 4M Iron believe their company is in an emerging market in coastal South Carolina.

"When Ross and I originally bought this shop, people thought we were too far away from a city, but now that expansion and development is coming this way," Finley said. "In fact, much of that growth is now closer to [the St. George] location than to our Charleston operations. Wal-Mart is getting ready to complete a huge distribution center in nearby Ridgeville, and a lot of the expansion at the Port of Charleston is starting to head in our direction, whether it is refrigerated storage, or storage for a lot of the larger goods that utilize the port. Those facilities are being built along the I-95/I-26 corridor."

Recently, 4M Iron expanded its business by opening a second location in Princeton, W.Va., and is in the process of hiring a full-time sales staff. Finley and McMillian believe that it is an area of the country that has been underserved in the used equipment marketplace.

Dealership Creates a Military Memorial Along I-95 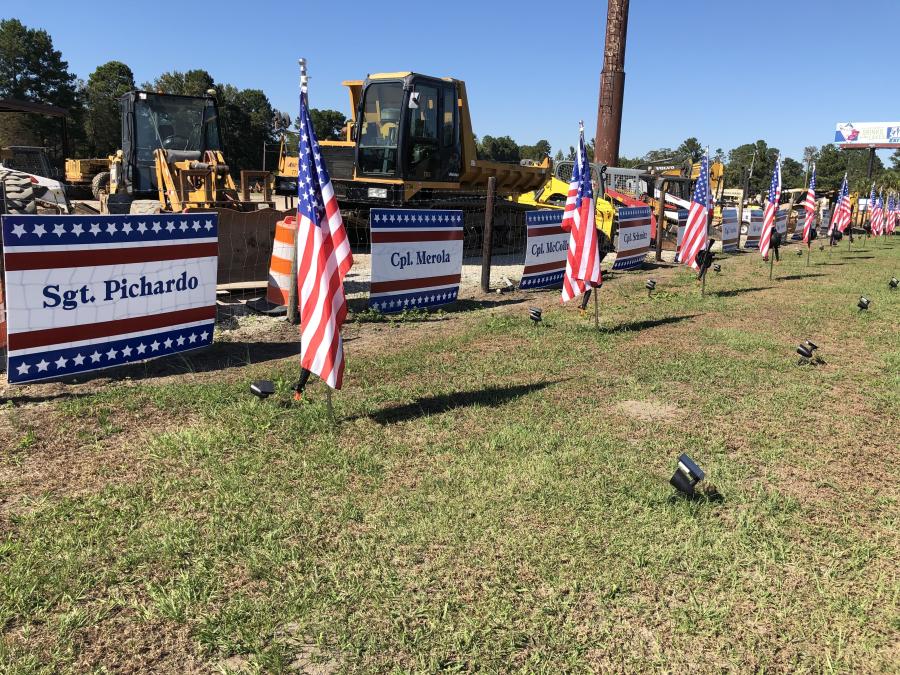 As an example of 4M Iron's strong values, the company and its personnel recently came together to erect a memorial display to honor the 13 U.S. soldiers killed on Aug. 26 during a bomb attack at the Kabul airport in Afghanistan. The display consists of the names of the service members on large boards, each accompanied with American flags, making them prominent enough to be seen from I-95, even at night.

"We had talked with our employees and decided to put forth a philanthropic initiative honoring the military," Finley said. "Larry Toto, who works with us, is a former Marine, and I also come from a military family. It was personal for our staff, and we just wanted to honor our country's military service members and all the sacrifices they make every day, many of which become forgotten.

"We have had a number of veterans pull off the interstate and into our facility to tell us how touched they have been by the display."